The Prussian Fusiliers are complete and battle-ready. They’ve brushed up quite nicely and will be a useful addition to Marshal Vorwarts command and hopefully a thorn in the side of old Boney.

With this unit just sneaking in to my 2022 output I have brought my Hinton Hunt tally for the year up to 97 figures painted which is much better than I thought it was going to be. The only problem is that I seem to be acquiring figures more quickly than I’m painting them so need to up the ante for 2023.

Dabbling with Medieval’s (off topic #35)

Goya invited me over yesterday to have a stab at playing a scenario from the Command & Colors Medieval game. Although billed as Medieval the scenario was from 528AD involving Sassanids and Byzantines at the battle of Melebasa. My previous experience of playing ancient type games is limited to playing with Airfix Romans and Britons as a kid so I was intrigued to see how C&C tackled this period.

We used the board and terrain supplied with the game but instead of blocks the armies were drawn from Goya’s extensive collection of 15mm figures that he built originally for use with DBA. Using miniatures with C&C transforms it (in my mind) from a boxed game to a proper tabletop wargame - the ultimate example of this being of course Tony’s amazing set-up for C&C Napoleonics!

It turned out to be another gripping game as C&C games always seem to be. The subtleties of the combat mechanism (which at first glance appears quite simple) required the application of some serious generalship which is probably why I lost. This is definitely a game that I would like to play again!

Posted by Stryker at 19:51 4 comments:
Labels: Commands & Colors, Off Topic

I’ve been braving the arctic conditions in the Hinton Hut (currently 6°C inside and 1°C outside) to work through the Prussian firing figures and have finally finished them. Now they just need a couple more coats of varnish and then basing.

They actually turned out to be quite a lot of work as half of them needed bayonets replacing which I did by splicing in musket ends from some spare poor quality donor castings. The paint touch-up also turned out to be pretty much fully repainting them. I couldn’t salvage Clive’s standard bearer who had been converted from a charging figure, so this has been replaced with a PN5 (the figure without a musket) in keeping with my other Prussian units.

Overall, they are not the best unit in my army, but I think they will pass muster.

Well of course the cavalry couldn't let the infantry get away with all the glory so Uxbridge insisted on a full review of his troopers as well.

This reminds me that there are no Life Guards so I must put them on the list for 2023.

The Duke has ordered a full review of his infantry regiments as an official welcome to the Fusiliers.

This gives me six British infantry units, but I’ll need a couple more to make up my ideal eight-unit army establishment. However, before that I’ll be turning my attention back to the Prussians.

Posted by Stryker at 15:48 33 comments:
Labels: British, On Manoeuvres

My British Fusiliers are finally parade ready so here they are. 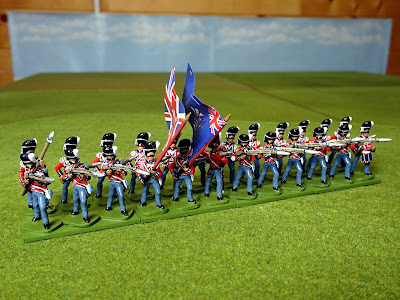 For the record the figures used were 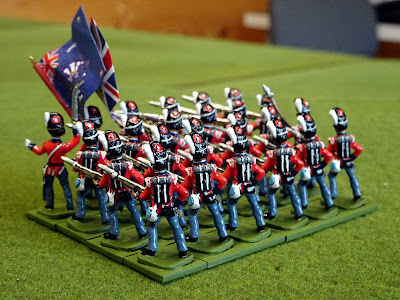 The figures are all vintage castings originally in the collection of Eric Knowles that I stripped and repainted. 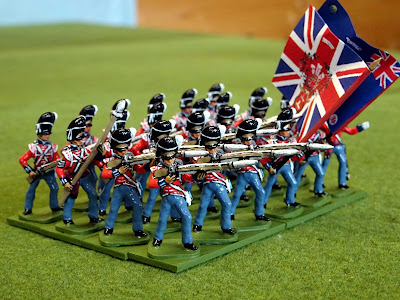 One of the great things about doing a project like this is that my army OOB’s tend to continually go off at a tangent as figures become available to me. British Fusiliers were never on my radar, but I think they make an excellent and colourful addition to Wellington’s forces.
Posted by Stryker at 11:23 23 comments:
Labels: British, On Manoeuvres

As I’m sure most of you are aware there have been quite a few bits and pieces of Clive Smither’s vast toy soldier collection finding their way on to eBay recently. I had been wanting to have something of his for use in the Hinton Hut and managed to pick up a unit of Prussian firing figures a couple of weeks ago. These figures were part of Clive’s Prussian force and, as it was the desire to recreate my old Hinton Hunt Prussian army that led me to start this blog, they seemed like an appropriate addition.

I only met Clive once (when he came to Bath to attend my 2016 wargame) but we exchanged many emails over the years. I remember discussions with him about how best to use Blogger to catalogue Hinton Hunt figures at the time he set up the Hinton Hunter. He was also very helpful identifying figures for me in the days before he had his blog up and running. His Prussian figures were mostly David Clayton produced castings as vintage ones were rare as hen’s teeth. I believe most of them were purchased from a shop in the US that was closing. He generously gave me the option on some of that purchase including the figures I used for the famous 1st Silesian Landwehr.

Being Clayton castings, the figures are not that great, the metal is on the soft side and at least half the bayonets are stubby and need some restoration work. As you know, I normally prefer to strip the paint from old castings but as these figures were Clive’s work, I didn’t feel very comfortable with that idea so tried a touch up on a test figure which of course pretty much ended up as a repaint.

One of the problems I have encountered is that the figures have been coated with Plasti Dip which is a product that is useful on plastic soldiers to stop paint flaking. Quite why Clive used this on metal figures I’m not sure and in places this thin membrane is coming adrift. Having faffed about trying to remedy this I decided last night to strip some of the figures after all and, with a twinge of guilt, cast them into the jam jar of doom.

To my amazement they emerged from the bleach this morning completely unscathed which I took as a sign - don't mess with Clive’s figures! I will be returning to my touch-up plan.

I did say that I’d complete these lads before the end of the month so here is the proof. They just need another couple of coats of varnish and basing but technically they are ‘finished’. 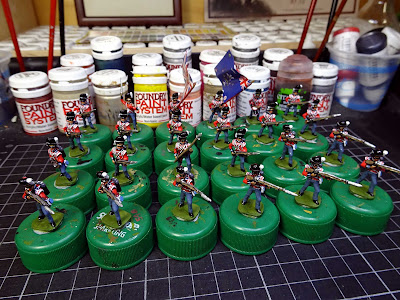 I know I’m quite a slow painter but, in the time since I started work on these figures in late August, we have had two monarchs and three prime ministers. I’m slightly concerned about what may happen while I paint the next unit…

I still seem to be finding every excuse possible not to paint British fusiliers (e.g., working my way through 24 x Jacklex British colonial Highlanders) although I can, hand on heart, say that I’m on course to complete them all by the end of the month. I have however finished all the command figures, including three conversions.

The flags were a right old pain to do. They’re from my stock of 20-year-old Revo ones and although the sticky was still working, I was horrified to find that the ink was wearing off as I folded them. I didn’t have any spares, so I just had to go with it and then spent an entire painting session retouching them trying to match the original colours. In the end it seems to have worked out ok although they very nearly went in the bin.

Hinton Hunt didn’t produce standard bearers or drummers for the fusilier range, so I converted these from charging figures. I’m pretty pleased with the drummer but it’s hard to get the flag anywhere near vertical using a charging figure as a standard bearer as there is only so far the arms will bend. I think they’ll look fine though when ranked up in the line.

The Men Who Would Be Colonial Wargamers (off topic #34)

Goya came over this afternoon so we could have a run through with The Men Who Would Be Kings ruleset for colonial wargames. He brought with him everything we needed in a single box, British and Mahdist 20mm armies, Rule book, desert terrain mat, rocks and some really nice palm trees.

As you know, I have a bit of a thing about colonial wargames but I had never played these rules and was keen to see how they worked. We had a fun little game for a couple of hour’s and I think managed about eight turns.

In other news, work on the fusiliers continues but more on that next time.

Posted by Stryker at 20:09 12 comments:
Labels: Colonial, Off Topic

Goya popped over yesterday for a toy soldier related chat and showed me a couple of really nice British Napoleonic figures he had painted (20mm but not HH). We both agreed that we enjoy painting British Napoleonic’s more than any other nationality as we consider that they have the most striking uniforms, its just something about the red and grey combo that really works.

Goya reckons he can paint and base a full 24-figure unit in 21 hours which I consider impressive as I think that the same for me would take in excess of 50 hours. However, I know that I do try and avoid the job in hand when there are 24 figures staring back at me from the painting desk by seeking diversion into my other ‘minor’ projects.

Last night following his visit I knuckled down and only painted Fusiliers and achieved more than I had previously done all week. Revitalised, the aim now is to get on and have the unit finished by the end of October and stop messing around painting other things like ACW buildings for my 6mm armies (click HERE) that I don’t even need.

A few years back when I first started collecting figures for this project, I won a mixed batch of Hinton Hunt on eBay that included a unit of British Guards in bearskins. I rejected these figures and eventually swopped them because of course the Guards didn’t wear bearskins at Waterloo. I wish I’d hung on to them because my feeling now is - so what if they didn’t?

I was really pleased therefore to recently be offered some British Fusiliers in bearskin that are ex Eric Knowles collection. Nice first-generation castings and enough to make a full unit using the charging and firing figure types. Again, it’s unlikely that the Fusiliers (other than possibly the Sergeants) wore their bearskins at Waterloo but certainly the Victorians didn’t have a problem representing them that way.

At first, I was planning to designate the unit as the 23rd Royal Welch Fusiliers but when I looked at the Hinton Hunt painting instruction sheet, I saw that Marcus Hinton had decided on the 7th Royal Fusiliers so that’s what I’ll be calling them. Of course, the 7th didn’t make it to Waterloo because they were away fighting in America, but I won’t let a little thing like that stop me using them.