The Washing of the Zulu

Having said he was relatively easy to paint and having looked at the figure again, I realised that in fact I wasn’t very happy with my paint job. The big problem is that my block painting technique doesn’t lend itself well to large areas of the same colour – in this case flesh. 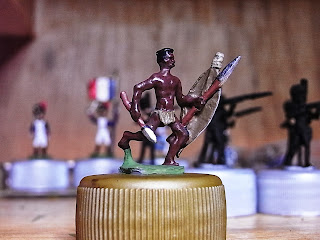 So I applied another coat of Foundry 6A Dusky Flesh and then applied a wash of 47B Leather and Metal Brown Wash to give the flesh areas a bit more definition (thanks for the idea Don). It doesn’t show up well to the camera but looks much better in the flesh, so to speak. 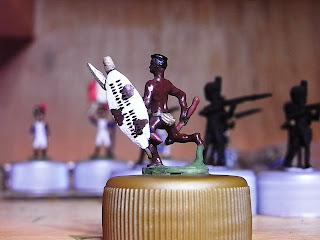 I also repainted the shield front because I felt I could do a bit better. All in all I’m much happier with the final result – just need another 99 figures and I’ll have a decent sized Impi!
Posted by Stryker at 20:19 2 comments:
Labels: Colonial 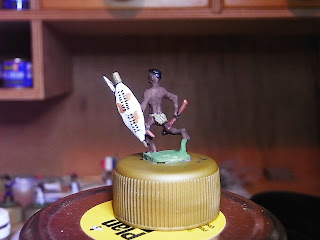 Not thousands of ‘em, I have half a dozen due to a recent impulse foray on eBay. The reason for this diversion is that as a teenager I had visions of buying several hundred Hinton Hunt Zulus in order to wargame Rorke’s Drift. Like many kids growing up in the 60’s I was influenced by the famous film and can remember going to Hounslow Odeon to see it when it first came out.

I never did buy any Zulus back then but I thought it would be nice to take a proper look at some now. This figure is listed in the Hinton Hunt Catalogue as a “Warrior of a Headring Regiment” ZWZ6 Zulu, running with stabbing spear at the ready.

The figure is a pretty basic sculpt and was relatively easy to paint compared to Napoleonic types. Individually I’m not all that impressed with this one but I would think that a whole massed Impi would be passable on the wargame table.
Posted by Stryker at 19:44 7 comments:
Labels: Colonial

I always enjoy seeing pictures of figures from the collections of other Hinton Hunt fans. For a start it shows me that I’m not the only one with affection for these little 20mm fellows but it’s also nice to see different painting styles and unit organisations etc. The following pictures were sent to me recently by Ken and show some of his Austrian and French troops on parade. 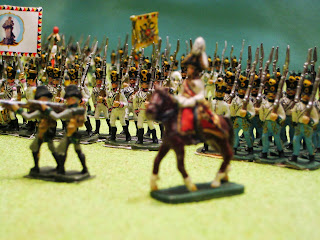 Austrian troops on the march - AN/7 Musketeer, marching and on the right, AN/27 Hungarian musketeer, marching. The General out front is one of my all time Hinton Hunt favourites - AN/102 Austrian General (mounted) in cocked hat, reading map. 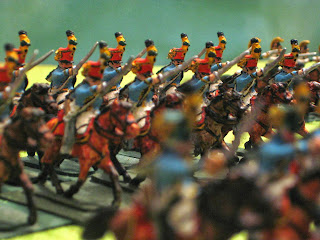 Austrian hussars (AN/81) - a stirring sight and a great photo too, you can almost hear the hooves thundering! 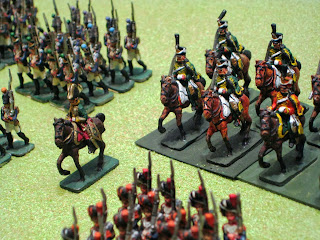 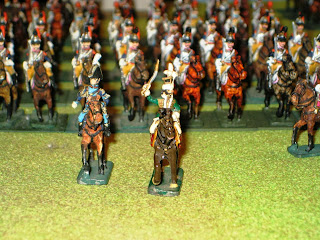 The King of Naples (FN/351) in front of an impressive array of Cuirassiers. There's just something about Currasiers when they're massed like that - I must paint some myself!

My thanks to Ken for sharing his troops with us.
Posted by Stryker at 20:52 3 comments:
Labels: Guest Appearance

This is my ‘test’ figure for the firing pose unit of French Old Guard Grenadiers that I will be painting to represent the 2nd Regiment of Grenadiers. 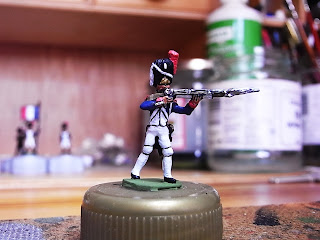 The figure is listed in the Hinton Hunt catalogue as a Grenadier of the Old Guard 1804/15 in Guard Bearskin, long tailed coat, waistcoat, knee breeches and tall gaiters – FN/23 Grenadier (firing). In my opinion this is one of the best examples of Marcus Hinton’s work and was a pleasure to paint. 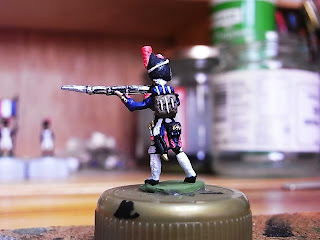 I’m also making good progress with the command group of figures for this unit but next I will have to knuckle down to the more tedious task of painting the remaining 20 identical figures – not that I’m grumbling.
Posted by Stryker at 20:08 10 comments:
Labels: French, Guard

Additions to the ranks 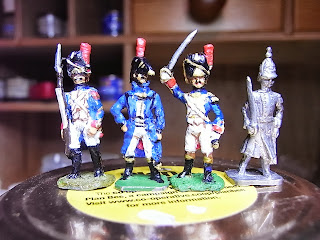 On Saturday I was fortunate enough to receive a little package in the post from Steve – this was exciting stuff as I was pretty sure there’d be some Hinton Hunt figures inside but I had no idea what they would be.

So here they are, from left to right: 1) FN/28 Old Guard Grenadier Sergeant (marching), 2) a wonderful conversion of a French officer (not sure which original model was used), 3) FN/61 Old Guard Chasseur Officer (charging), 4) RC/6 Crimean War Russian Officer in spiked helmet and long great-coat (marching). 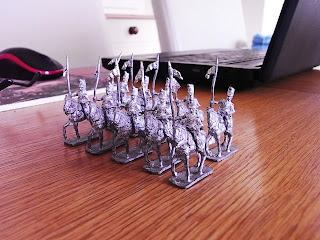 Well I finally waved the Swedes goodbye on Friday and in their place in part-exchange arrived these pristine castings of FN308 Eclaireur Lancer of the Guard (on horse FNH/3). The figures are all vintage ones with flash intact that have never been painted before – a real treat.

Now I have to confess that until these lads turned up I had thought that an Eclaireur was a pastry filled with cream. For some reason the existence of these units of Imperial Guard cavalry had passed me by. A little bit of quick research revealed that they were formed after the campaign in Russia to counter the effect of Cossacks and to act as scouts/skirmishers for the Guard cavalry.

In practice the Regiments of Eclaireurs were split up and assigned to the various other Guard units. In my army a squadron of them will eventually be combined with my Polish Lancers and Horse Grenadiers to form a composite Guard cavalry unit.