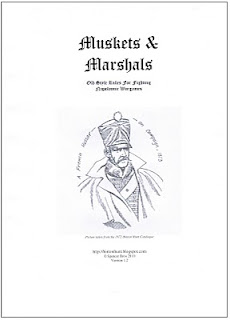 Following the Battle of the Crossroads I have had a final tweak of my house rules Muskets & Marshals. I say ‘final’ tweak even though experience has shown me that there is actually no such thing because tinkering with rules is as much a symptom of my borderline OCD as the desire to keep re-basing my model soldiers is.

That said I am pretty happy with the rule set as they stand and I certainly had a lot of fun playing the game using them. The firing system involves throwing a lot of dice and I’ve found over the years that this always tends to make a wargame more fun than the slide rule/logarithm approach.

The rules are an amalgamation of various rule systems and ideas nicked or created over the last 40 odd years. The movement rates and ranges are straight out of the London Wargames Section Napoleonic Rules (1968). The melee system is spookily like the one from the board game Risk. Many of the other ideas were developed for a set of ACW rules my brother and myself knocked up in the 1980s. The emphasis is on fun and speed of play. 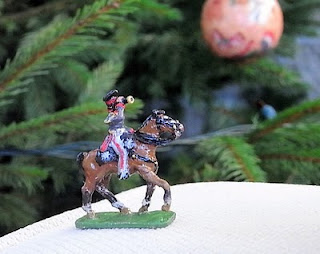 A lone Prussian general plods through the Christmas snowscape on his tired old warhorse scouting the horizon through his telescope. The figure is a vintage casting of PN64 Prussian general (mounted) looking through spy-glass given to me today by Mrs S. She acquired him via eBay, I do hope it wasn’t her I was bidding against…
Posted by Stryker at 15:42 2 comments:
Labels: Prussian

Battle of the crossroads – Part 3

While the French heavy cavalry passed his flank General Aldercreutz took refuge in the square of the 4th Swiss regiment. Aldercreutz presented something of a target on his high horse (due to the fact that being a ‘knock-off’ his base is unusually thick) but thankfully he survived the action unscathed. 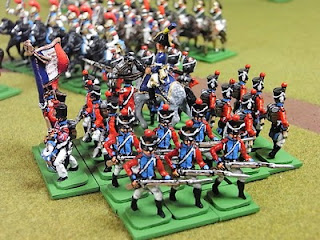 General Aldercreutz took refuge in the square of the 4th Swiss.
D’Hilliers wasted no time in ordering his cavalry to charge straight at the Union brigade forcing them to make an immediate morale test. This they took on a minus one (because of Ponsonby’s demise) that left them shaken and unable to counter charge. A few more rubbish dice rolls meant the resulting melee was lost – the unthinkable had happen, the Union brigade was in full retreat! 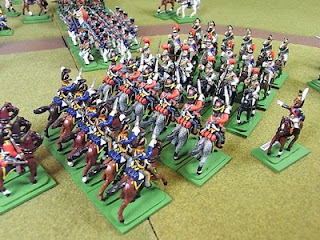 The cavalry melee.
Meanwhile in the centre of the field things were going from bad to worse for Wellington. Mercer’s battery had been steadily losing casualties to the fire of the 10th Legere and yet another failed morale test for the Allies saw his guns limbered up and making haste to the rear. All this as the columns of the Nassau grenadiers and 45th Ligne were closing on the position held by Picton and the Naval battalion. 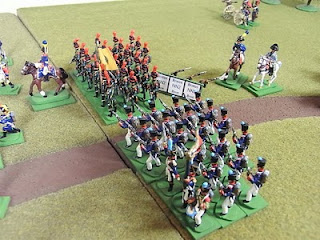 The French columns close in.

A volley at long range from Picton’s men took out three of the Nassauers and for a moment it looked like the line might just hold but then the Nassau colour-bearer ran forward holding his flag aloft (he has a very strong hand) and the Nassauers were in amongst the British with the bayonet. Even the presence of the Duke (with his plus one to morale rolls) wasn’t enough to save the situation and the Naval Battalion broke and fled. 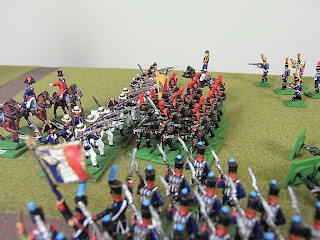 The Nassauers show the Brits some cold steel.
The Allies were in full retreat and a dejected Wellington sat upon his trusty horse Copenhagen looking on at the sorry scene. “A hard pounding eh, gentlemen?” “A hard pounding indeed your grace.” said Lord Hill and Picton. 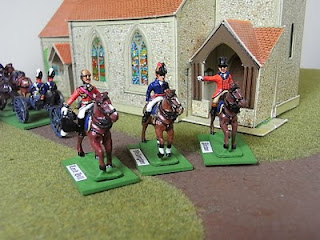 The vanquished.
On the other side of the field the Emperor looked upon the same scene but was in a very different mood “I told you the English were not good soldiers Bernadotte, did I not?” “Yes sire, you did.” replied Bernadotte. “They may have the best cavalry in Europe but it is the worst led and anyway, I’m sure those ones on the grey horse were drunk!” 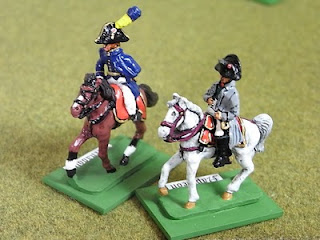 The battle was over but the war had only just begun…
Posted by Stryker at 19:50 11 comments:
Labels: Battle of the Crossroads, Playing Soldiers

Battle of the crossroads – Part 2

With the French skirmishers distracting the Allied line the Emperor now chose the moment to start to advance his infantry columns. 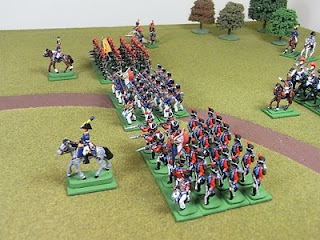 The French press forward.
While the French light infantry continued to annoy the Allied infantry, General Ponsonby was growing impatient at finding himself in reserve. Eventually the General could bear it no longer and, seeing a group of the enemy no more than 100 yds in front of the Landwehr, decided enough was enough. “Forward the Union Brigade, at the trot, charge..!” 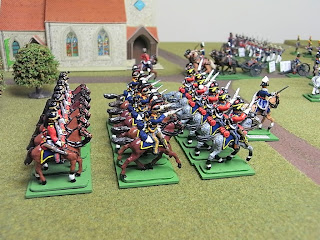 Forward the Union Brigade.
Cavalry units may not make a passage of lines through friendly cavalry. They may however make a charge move through friendly infantry (they incur a 100yd movement penalty and must be able to end the move in contact with an enemy unit). The infantry unit will become disordered and must test morale.

The troopers charged through the Prussian Landwehr and on into the French skirmishes who failed to form a skirmish square in response (If charged by cavalry skirmishers may form a skirmish square on a roll of 5 or 6 (4,5,6 if elite) otherwise they are ridden down). Ponsonby was elated as the Grey’s cut down the enemy to a man but a final musket shot from the French knocked the poor general from his horse! 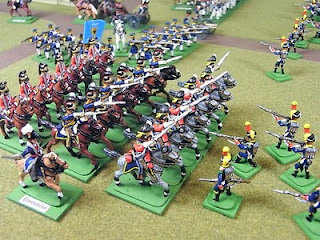 "Watch out General Ponsonby, sir!"
It can be said with little doubt that neither Blucher nor the Duke was at all pleased with Ponsonby’s movement. “Mein Gott!” cursed the Prussian Marshal “Vot are zees dumkoff drunken vools up to?”. With a die roll of 2 the Landwehr failed their morale test, broke and fled – a spectacular own goal for the Allies. 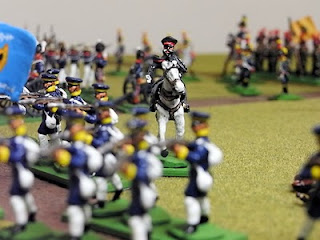 Meanwhile the French responded to the sudden appearance of the British cavalry by forming the 4th Swiss into square and advancing D’Hillier’s heavy cavalry to meet the threat. The Carabiniers in the lead were confident and positioned themselves for a charge while the ranks behind them (being DK castings) were slightly more nervous. 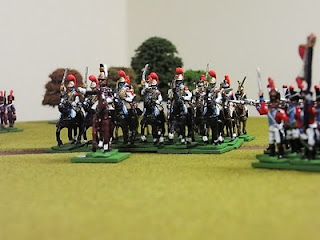 D’Hillier’s moves forward.
All along the line the Allies were now very hard pressed and even Mercer’s battery was losing heavy casualties to the incessant French skirmisher fire. The situation for the Duke was starting to look serious.

To be continued…
Posted by Stryker at 09:29 6 comments:
Labels: Battle of the Crossroads, Playing Soldiers

Battle of the crossroads – Part 1

I felt suitably inspired last Sunday to finally have a bash at a wargame with the Hinton Hunts. It was a small affair using two terrain tiles to produce a battlefield just 2’ by 4’ and I played solo using my own rules Muskets & Marshals. The game took about two hours to play, lasted only five turns and was surprisingly good fun. This is what happened.

The Duke of Wellington (with his ADC Lord Hill) had deployed the Allied force in line to defend a vital crossroads. On the left were the Naval Battalion commanded by Sir Thomas Picton (resplendent in red coat and top hat) and on the right were the Silesian Landwehr under the watchful eye of old Marshal Vorwarts. Ponsonby’s Union brigade supported the Landwehr while Mercer’s horse artillery was placed across the main road between the two infantry battalions. 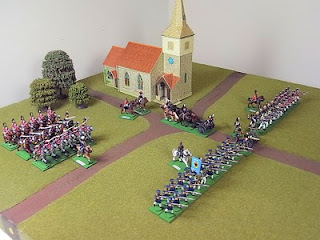 The Allied army deployed in line ready to defend the crossroads.

A few hundred yards to the east the Emperor (with his ADC Marshal Bernadotte) was preparing his force for the attack. From left to right deployed in column were the 4th Swiss (General Aldercreutz), the 45th Ligne (Marshall Lannes) and the Nassau grenadiers (General Klingspor). On the extreme right flank were the Imperial Guard horse artillery and to the rear of the infantry line was General D’Hilliers with the heavy cavalry. To the front, deployed in skirmish formation, were the elite 10th Legere in their lovely furry hats. 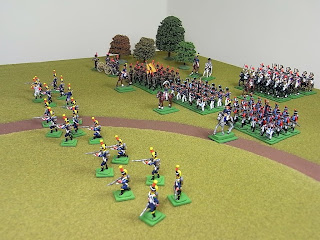 The French army getting ready to advance.
Happy that all was now ready the Emperor signalled the artillery to open fire at long range on the Naval battalion, which they duly fired upon and failed to hit. Captain Mercer, not waiting for the Duke’s command, gave the retaliatory order “open fire!” to his battery sergeant and the six-pounder’s let rip with a roar. 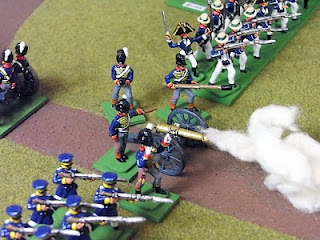 Mercer gives the order “open fire!”
The first shot from Mercer’s guns flew across the field and knocked brave Marshal Lannes from his horse before bouncing through the ranks of the 45th Ligne where it claimed a further casualty. The Duke was not impressed “The commanders of armies have something better to do than fire upon one another.” he exclaimed to Lord Hill. “Yes your grace.” Hill replied, “but it was a damn good shot!” 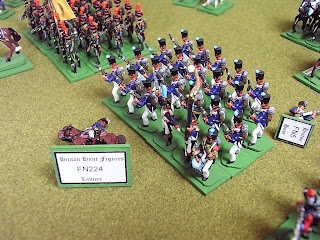 
The Emperor, angered by the turn of events turned to Bernadotte “Mon dieu! These English are not gentlemen at all. Send forward the 10th Legere, we will show them the way we French play wargames!” 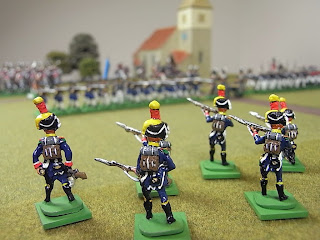 The 10th Legere advance on the Allied line.
The French Light infantry moved up to effective musket range and started to pepper the Allied line with musketry (skirmishers may move up to half a move and fire with full effect). The Landwehr soon lost one man to their fire but then the Naval Battalion suffered a greater blow as the skirmish group to their front rolled 4 sixes! 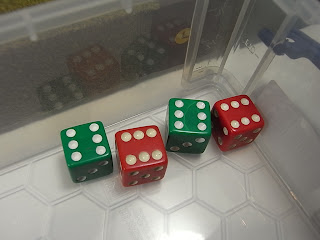 “We will show them the way we French play wargames!”
The Naval battalion were visibly shaken by the ordeal as Picton rode up and down the line trying to restore order in their ranks. 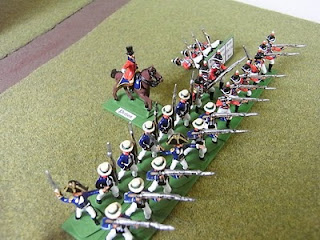 Picton steadies the Naval Battalion.
At his command post near the church Wellington looked on “Hot work Lord Hill, what time is it now?” “Just past turn two your grace.” Replied Hill. “I think I may ride forward to give Picton a hand (and an extra plus 1 on morale), I’m sure Blucher will hold on the right with the support of Ponsonby’s cavalry.”

To be continued…
Posted by Stryker at 14:53 11 comments:
Labels: Battle of the Crossroads, Playing Soldiers

This is another unit in my collection that hasn’t had much of a showing here. These infantry figures are RN17 Russian grenadier (marching) with RN11 officer (charging). The castings are all vintage and they were the very first unit I painted at the start of this project.

A line of Russians 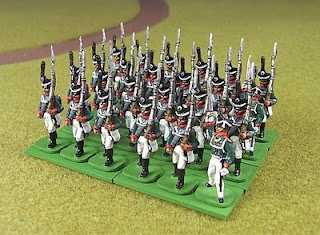 For some reason Hinton Hunt Russian figures are the hardest to come by in my experience. Apart from this unit I have a regiment of Pavlovski grenadiers (really looking forward to painting those), a single squadron of cavalry and one gun crew. It’s a small contingent but the figures are amongst my favourites – I hope to get them all painted up in time for the World Cup in 2018! 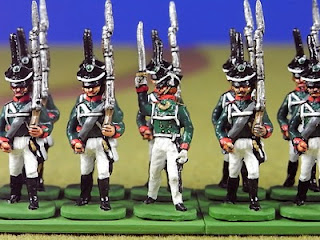 You will be pleased to hear that I have nearly finished those French grenadiers and I will post on them next. I did however have a bit of a mishap whilst painting them when I managed to knock over my pot of Foundry 47a Copper Wash. It was a slow motion moment as the little tidal wave of brown paint made its way towards me down the desk - the question was do I save my jeans or the carpet? I opted for my jeans – wrong! 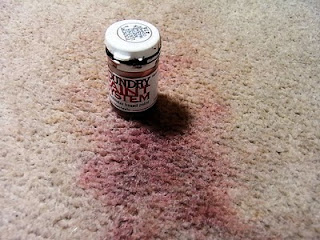 Throughout the whole drama our old labrador Snuff (who you may remember shares my study) remained singularly unhelpful. There was no Lassie style rush to my rescue with kitchen roll or a damp sponge, in fact she just looked rather annoyed at all the commotion. 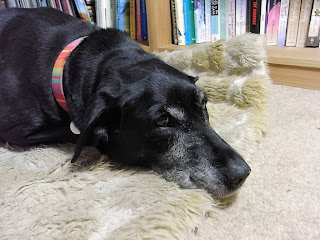 Those of you who have read back through my older posts may have noted that this is not the first time that I have had an incident with my 47a Copper Wash. I knocked over my last pot almost three years ago to the day, that time however I managed to keep most of it off the carpet and out of Mrs S’s line of vision. I fear I have not been so lucky on this occasion.