More Grumblers and a virtual wargame

First up, it looks as if reducing the number of figures in a painting batch has increased my productivity as this week, I have completed a further 6 of the Old Guard Grenadiers including an officer and sergeant. At this rate I should romp home in the “race of the Old Guard” (click here), famous last words no doubt.


Yesterday I was privileged to take part in a virtual Command & Colors Zoom game hosted by the reclusive Foy himself (ably assisted by Tony). It was a great success and was the next best thing to being in the room with Tony, Goya and the toy soldiers. Tony had put a lot of thought into how to run the game, not just the scenario but also the camera angles and lighting and it went without a hitch.


Tony has already covered the game on his own blog (click here) but suffice to say it was another of those C&CN games that went right down to the wire. The result was a 7 to 6 victory for Goya’s French forces after 14 turns of play. Top marks to Tony for staying on his feet for 3 hours, moving all the troops, throwing all the dice, and keeping track of markers while Goya and I slouched over our keyboards at home with a mug of coffee. I’m hoping we will get to do this again.
Posted by Stryker at 09:26 22 comments:
Labels: Commands & Colors, Playing Soldiers, Virtual Wargames 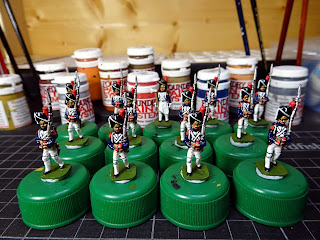 Painting the Grenadiers is still feeling a bit like wading through treacle at the moment. The current batch, just completed, brings the unit to just over the halfway point. I think I am conscious that these are very special old castings that deserve my best possible efforts.

It would probably be easier if I painted them in smaller batches as doing six at once hasn’t really worked as the paint tends to dry out on the palette along with my enthusiasm. I decided I’m going to paint the rest of the unit in batches of four.

There have been no Napoleonic games of late as Tony, Goya and I are of course confined to barracks. We had been hoping to have a stab at a C&CN Leipzig scenario, but I guess that will have to wait. However, we have been experimenting at bit with Zoom and hopefully a small virtual game may be in the offing soon.
Posted by Stryker at 14:20 16 comments:
Labels: French, Guard
Newer Posts Older Posts Home
Subscribe to: Posts (Atom)