The Battle of Windmill Hill

1813 Somewhere in Central Europe - the Allied army under Blucher is moving relentlessly west in an effort to bring the French to battle. Demonstrating his usual brilliance, Napoleon has stolen a march to intercept and surprise them. The two armies collide at Windmill Hill.

This is an encounter battle with the Divisions of each army arriving in succession and being ordered and deployed as they come onto the table. The game will last for 14 turns and the side with the most victory points at the end of that turn will be the winner.

This is a play-by-email game with Matthew (aka Wellington Man) taking the part of The Empereur and myself that of old Marshal Vorwarts. We have just finished playing turn 3 and reinforcements are about to arrive.

Keeping the snow goggles on

I’ve made a start on my next Austrian unit and guess what? Yes, they’re uniformed in white! They are Dragoons of the Erbgross Herzog Von Toscana Regiment painted as per the Hinton Hunt painting instruction sheet. The castings are vintage ones that I’ve had in my possession for quite a few years now so good to finally get some paint on them.

The bugler is converted with a brass rod and Magic Sculp bugle and I even carefully carved away his carbine, however I forgot to add a sword hilt but hey ho. I was spared the guilt of removing the sword from a healthy casting for the conversion when one conveniently broke off in the bleach bath.

The table has been cleared of Boer War clutter (take a look here if you missed my Elandslagaate game) to be set up ready for a Napoleonic game. This gave me the chance to parade my Austrian infantry for the camera. 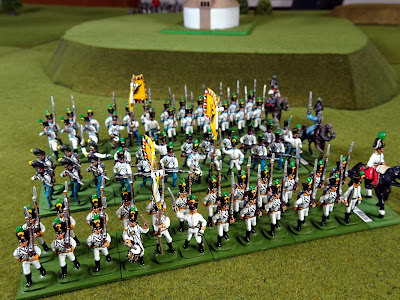 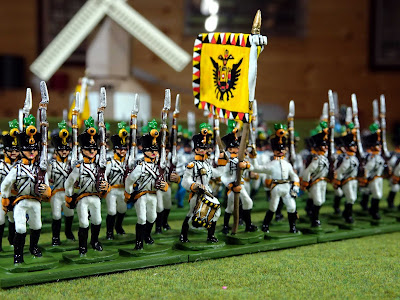 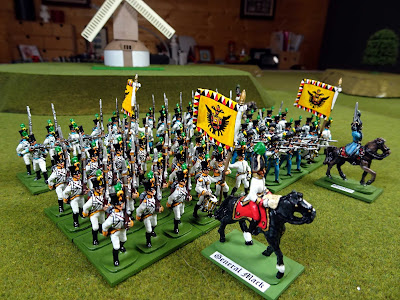 There will be more on the forthcoming game in my next post.

Here they are, resplendent in white – the 59th Jordis Regiment ready to follow General Mack (if only he could learn to read that map). 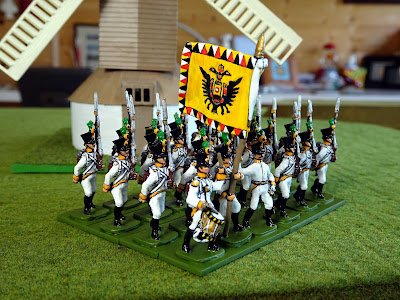 I’ll be staying on an Austrian theme for the next unit.

I’ve never been very happy with the flags I painted for my two previous Austrian regiments (this and this), so I decided to try and up my game for the 59th Jordis (I blame WM and Goya). Having achieved something I felt was more acceptable, it immediately became apparent that I would have to re-paint the flags for the other two regiments - doh!

I would stress that these flags are not meant to be a fully accurate reproduction of the Austrian battle-flag, but I think they look fine at normal playing distance.

We said goodbye to my dad on Monday. Dad had many facets to his long life, but I thought it would be appropriate to record here a few things about his wartime experience in the RAF.

When the war started, he was working as an engineer in London and he continued to do this throughout the Blitz and on into 1941. At that time his work was classified as a reserved occupation but following one air-raid he emerged from the works shelter to see a group of Spitfires flying low overhead and decided there and then that he would volunteer for the RAF.

Being somewhat reserved by nature the glamour of being a pilot didn’t appeal to him so he chose to volunteer as a Navigator thinking this would make the best use of his technical skills. He had to wait a few months to be called for basic training during which time his call-up papers arrived for the army, he told me he was very pleased to be able to return them!

He did his basic training at Babbacombe in Devon before moving on to Cranwell where he learnt the art of navigation flying on Anson trainers. In common with many RAF personnel he was then shipped to Canada, travelling out on a convoy at the height of the U-boat war. He did a period of training at Hamilton and Charlottetown before taking the train across The Rockies to Patricia Bay to complete operational training on Hampden bombers. He qualified as a Navigator/Wireless Operator.

Dad loved the Hampden and loved Canada, he even somehow managed a short-term engagement to a lady called Betty (mum used to roll her eyes when he recounted that tale). Here he also had his first experience of how dangerous his chosen occupation really was when one of the other crews were killed in a crash-landing. The pilot had only been married for a few weeks and they all had to have a whip-round to get enough money to give his wife the fare home.

Coming back to the UK in 1943 (this time on the Queen Mary which could out-run the U-boats) he was sent to Crosby-on-Eden (now Carlisle airport) which he said was dismal and wet after life in Canada. The Hampden was being withdrawn from service as obsolete, so he had been sent with his pilot to convert to Beaufighters. The course also involved learning to use a new invention – underwing rockets – and it was on a take-off to the firing range that he experienced his first crash-landing when an engine overheated and they came back to earth with a bang, fortunately both he and his pilot were unharmed.

Dad and his pilot Geoff (they had crewed up in Canada and remained together through all his operational flying) expected to be posted to Coastal Command which was where the Beaufighter was mostly employed at this time. Instead they were told they were going to SEAC (South East Asia Command) and would be ferrying a plane all the way to India.

Although the war in North Africa was now over it was still no mean feat to fly an unarmed Beau crammed with spares all the way from Portreath in Cornwall to Allahabad in India. It’s a tribute to his skills as a navigator and Geoff’s as a pilot that they made it without incident.

Posted to 211 Squadron on the Indian/Burmese border he was quickly introduced to life on operations. His first mission was an attack on Mandalay railway yards in April 1944 where he also fired his own machinegun in anger for the first and last time to scatter an anti-aircraft gun crew. He fired his gun without warning which startled his pilot (Geoff was absent sick) who was rather cross with the newbie, however he may well have saved the lives of the crews in the two following aircraft by his actions.

Flying operations over Burma was physically and mentally draining, usually the planes operated on their own and the average mission lasted 3-4 hours but sometimes as long as 6 hours. Most of the time was spent flying at just 30 feet hugging the contours of the ground to avoid detection from enemy fighters and radar, a momentary lapse of concentration could see a plane plough into the ground which did sometimes happen. During his time on the Squadron a crew was lost every two to three weeks and their loss was seldom witnessed by anyone, many died but some ended up in Japanese hands to experience the misery of a prison camp.

When he arrived on the Squadron a tour of operation was set at 300 hours flying but this was reduced to 200 hours a few months later, a decision that probably saved his life. When dad completed his 200 hours (only the second crew to do so) the ground crew gathered round on landing to congratulate them both. However, as Geoff was short of a few hours he was told he must fly another mission, without hesitation dad volunteered to go with him. Fortunately, that flight passed without incidence, but it must have been nerve-wracking. In total he completed 205 hours of operational flying over 51 missions, he crash-landed on a further two occasions during this time.

With his tour expired he went on leave in India and was subsequently posted to Yelahanka where he completed an instructor’s course in aircraft recognition. In the meantime, the Squadron had been withdrawn from operations and was in the process of converting to Mosquito’s. The Mosquito was not a popular plane with the Beau crews and being of wooden construction it didn’t adapt well to the climate in the Far East, there were reports of planes literally falling apart in the sky. Fortunately for him, the war ended just before he was due to re-join the Squadron.

Like many servicemen, he found himself stuck in India after hostilities had ended as the military struggled to repatriate them. Luckily for him he manged to get a plum posting to a communications Squadron where his job was to ferry VIP’s around the country in Expeditor’s. He got to stay in the palaces of Maharaja’s and to fly over the Taj Mahal, it was a time he greatly enjoyed.

In mid-1946 he was finally de-mobbed and returned to civilian life in London. He received his Distinguished Flying Cross from the King through the post.