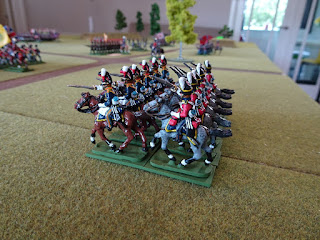 The Blues & Greys
Mustered in: June 2008 (Greys), September 2009 (Blues)
Composition: BN49 x 6, BN60 x 6 (all vintage figures)
Painted by: me
Battle Honours:
Vintage Waterloo (December 2015) – Stationed near Hougoumont, they helped throw back the French Cuirassiers that attacked the ridge towards the end of the battle (allied victory)
Battle for the Road (August 2017) – Deployed from reserve to the extreme left flank of Wellington’s line. Successfully held three French cavalry units at bay just by looking at them, were eventually attacked and routed by superior numbers (French victory)
Battle of the Four Generals (May 2018) - engaged on the right flank where they counter-attacked the French Chasseur/Lancers and routed them (allied victory).