Just in case you thought I had completely stopped painting figures myself here is FN/359 GENERAL LASALLE in pelisse, hat and full trousers (the horse is FNH/11 as I don’t possess the correct one FNH/13). This figure had been shoved to the back of my painting table since January where he had been passed over in favour of various bits and pieces being readied for Vintage Waterloo. 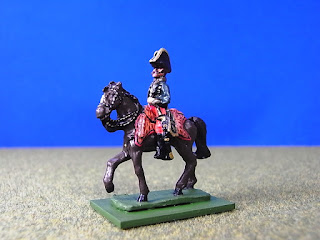 The Comte de Lasalle had a very colourful military career and I’m sure most readers of this blog will be familiar with his exploits. He was a "hard smoking-drinking-fighting-womanising” cavalry leader and rose through the ranks to eventually command a Division under Murat. It seems likely that he would have received a Marshal’s Baton had he survived long enough. 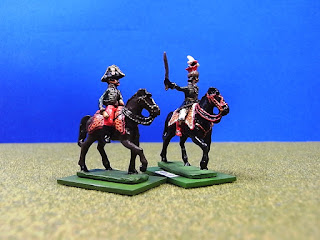 Lasalle is reputed to have said that “Any Hussar who is not dead by thirty is a blackguard!” but he himself lived to the age of thirty-four before an Austrian Grenadier put a musket ball between his eyes at the battle of Wagram. From what I’ve read I imagine him to have been a bit like Lord Flashheart in Blackadder.

Update: I realised that my first photo was a bit dark so I've replaced it with another one and added this close up of the detail on this figure. Amazing how much life Marcus Hinton could breath into these tiny 20mm creations!
Posted by Stryker at 10:23 16 comments:
Labels: French, General Staff

The 30th foot formed part of Halkett’s 5th British Brigade in Alten’s 3rd Infantry Division during The Hundred Days campaign. They were in the thick of the fighting on the ridge between Hougoumont and La Haye Sainte during the closing stages of Waterloo where they took part in the action that repulsed the Imperial Guard. Total losses in the battle were 51 killed and 165 wounded. 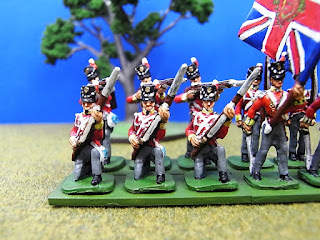 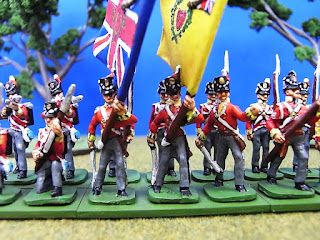 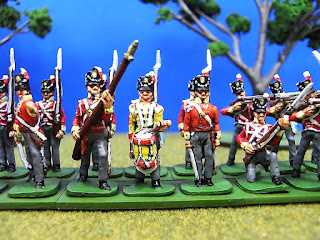 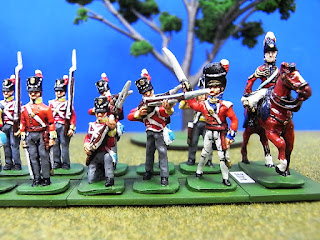 I chose to represent them in miniature simply because I fancied a British unit in yellow facings but having recently read Tim Clayton’s book on Waterloo I have become impressed with their contribution to Wellington’s victory. I had of course heard of the crucial role Mailtand’s Guards played in throwing back Napoleon’s Guard but Halkett’s Brigade were positioned right next to them in the line directly in the path of the advancing grenadiers. 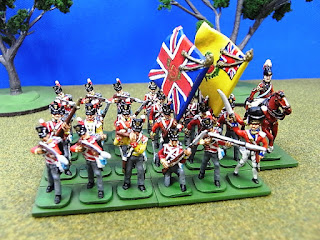 The Battalion in column (the Fifer is BN/11) 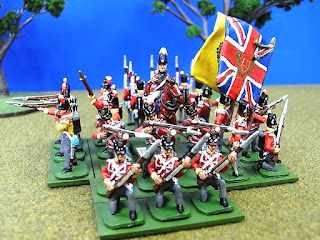 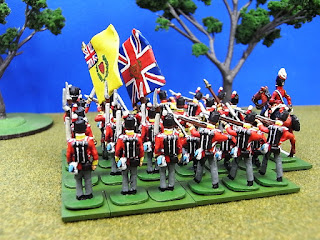 The whole army will advance!

The unit is made up from a selection of different poses because I didn’t have enough of any one type for a unit all in the same pose. I also slipped in a rogue Guards officer just because I liked him. All the figures are vintage Hinton Hunt with the exception of the standing officer and drummer which are DK. The superb brushwork is by Lee.
Posted by Stryker at 09:53 8 comments:
Labels: British, Vintage Waterloo

Those of you who have seen Matt’s recent post (click here) on the work he has done on my Hinton Hunt Uhlans may remember that they are destined to be brigaded with the DK Landwehr lancers to make a single 12 figure unit for Vintage Waterloo. Anyway, I thought I’d better get my skates on and post a couple of pictures of the DK’s before their more well-heeled compatriots arrive. 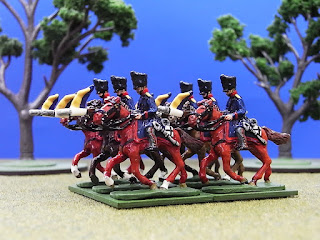 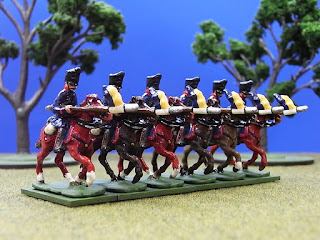 They've already graced the tabletop once albeit just for a dry run - next time it's for real!

Matt’s done great things with these figures and it just goes to show what a bit of superior brushwork can do to lift Der Kreigspieler’s to a place where they are truly worthy to fight alongside their Hinton Hunt brethren.
Posted by Stryker at 20:56 5 comments:
Labels: Der Kreigspieler, Light Cavalry, Prussian, Vintage Waterloo 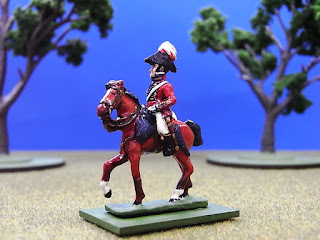 Alten was a Hanoverian who commanded the King’s German Legion Brigade in the Peninsular under Moore and later went on to lead the famous Light Division under Wellesley. At Quatre Bras and Waterloo he was in command of the 3rd Division which included Halkett’s British Brigade, Ompteda’s KGL Brigade and Kielmansegge’s Hanoverian Brigade.

Bruce Quarrie says of Alten that he was “a talented and inspiring commander” but I also found a quote on Wikipedia that has him down as “pedestrian” although to be fair, that was in comparison to Craufurd from whom he took over command of the Light Division. Whatever his abilities there is no doubt that he led from the front as he was wounded at both Salamanca and Waterloo.

This casting is probably a David Clayton one rather than a vintage Hinton Hunt one although it’s very hard to tell – all the Clayton personality figures I have are indistinguishable from vintage ones. The horse though is more easily identifiable as Clayton due to the one long plug mark along the base (vintage castings have two distinct separate plug marks).