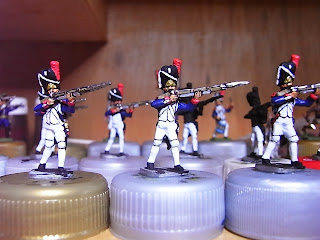 A grand total of seven figures completed in six weeks – not very impressive (but I did also paint that Zulu). At this rate I won’t have the unit finished before Christmas which was the goal I had in the back of my mind.

To chivvy myself along I have stripped and undercoated another batch of figures in the pretence of running some sort of production line. The hope is that this will inspire me to paint more although when I’ve tried this in the past it has tended to have the opposite effect. My problem is that I am very much a plodder when it comes to painting and try as I might I just cannot paint in batches of figures bigger than three.

Things may take a turn for the worse as I am committed to painting three divisions of 1/300th scale ACW figures for use in an upcoming campaign that will run on my other blog Brother Against Brother. Of course these tiny chaps are much quicker to paint than the Hinton Hunt's so I’m hoping production won’t be affected too badly.
Posted by Stryker at 17:29 10 comments:
Labels: French, Guard 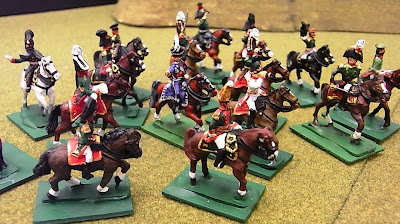 This is a photo that never made it into my battle report on the game I played with Roy back in July (click here). It shows the superb group of mounted officers Roy produced especially for the game (in my rules each infantry and cavalry unit needs a figure to represent the colonel).

Although not all the figures and horses are Hinton Hunt the eagle eyed amongst you will spot some very clever conversions of HH personality figures.

My favourite is the guy in the helmet with telescope (centre of photo) which I guess is converted from RN.85 Russian General – see how many others you can spot (sorry no prize)…

Update from Roy - this is the picture he used as the inspiration for his splendid Hussar! 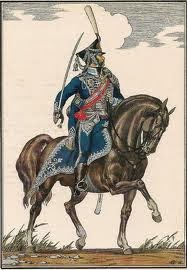 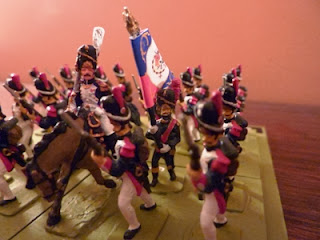 Thanks to everyone who commented on the last post and in particular to Tony who sent me this photo of a genuine Hinton Hunt Old Guard standard bearer he recruited into the ranks of King Joseph’s Royal Guard.

My faith in Marcus Hinton’s work is restored because this chap looks to be a far superior bit of sculpting to the figure I have just painted.

I’ve come around to thinking that the figure I have is possibly a Der Kreigspieler offering as Simon commented that he has an original Hinton Hunt casting and a Clayton one and they are identical.

Does anybody know for sure?
Posted by Stryker at 19:09 2 comments:
Labels: Guard

I finished the command group figures for the 2nd Grenadiers of the Old Guard a couple of weeks ago and thought it was time that I got around to posting them. 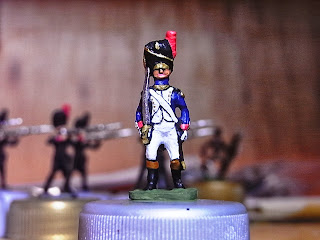 The officer is FN/27 Officer (marching), a nice solid little figure and a genuine vintage Hinton Hunt casting to boot. 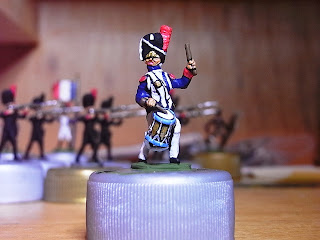 The drummer is FN/25 Old Guard Drummer, this figure wasn’t listed in my Hinton Hunt catalogue circa 1974 but does appear on ‘Additions Sheet III’. A bit weedy looking – would they have had drummer boys in the Old Guard or men? Actually, come to think of it this one is sporting a moustache! 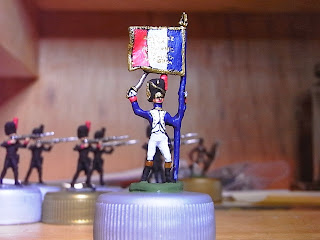 The standard bearer is FN/24 Old Guard Standard Bearer, this figure is also listed on the later additions sheet. A bit of a disappointing figure and hard to believe this was actually sculpted by Marcus Hinton (I suspect not). The figure is almost flat in profile and the left arm holding the flag is so long that it makes him resemble Reed Richards of the Fantastic Four. I included this figure for completeness but my preferred option would have been to convert a charging officer figure if I’d had enough of them.
Posted by Stryker at 09:06 13 comments:
Labels: Guard
Newer Posts Older Posts Home
Subscribe to: Posts (Atom)