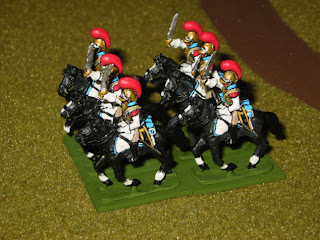 A squadron of Carabineers resplendent in red crested helmets - surely the most colourful of the French heavy cavalry? No French Napoleonic army is complete without them. Here we have:

One-piece Hinton Hunt cavalry castings are a bit marmite - you either love them or you hate them! They’re not the best of sculptures and generally came with more flash metal than figure. The detail such as cross belts tends to disappear annoyingly as you attempt to paint it so a good deal of imagination is required to animate the figures. However, for all their faults, I find myself strangely drawn to them. Perhaps it is because they were the only Napoleonic cavalry figures you could get when I started wargaming (unless you wanted to painstakingly convert Airfix US cavalry figures).

The two-piece castings are much better figures being easy to paint and compare well to those produced today. Presumably Hinton Hunt introduced them to replace the earlier one-piece castings although the two types remained in production together. I have enough castings left to make up another squadron to which I will eventually add some Cuirassiers to form a heavy brigade.
Posted by Stryker at 19:19 No comments:
Labels: French, Heavy Cavalry

The old ads are the best 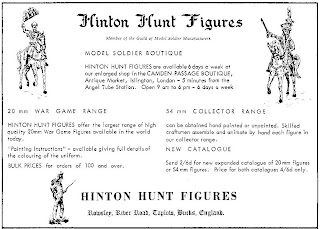 This is the advert that started it all for me – from the inside back cover of the July 1968 issue of Miniature Warfare. The advert proudly boasts that Hinton Hunt offer “the largest range of high quality 20mm war game figures in the world” – heck!

I was intrigued by the drawings of the mounted figures although I had no idea who they were supposed to represent. I just knew I wanted models like that and strangely enough, I now have both of them. The chap on the left turns out to be Marshal Davout and the one on the right is Marshal Murat. They don’t come much more dashing and exciting than Murat although apparently he was a pretty poor general – great taste in uniforms though.

I did eventually get to the Hinton Hunt model soldier boutique in Camden Passage in about 1974 but was disappointed to find it only stocked 54mm figures. For some bizarre reason I bought a 54mm Caledonian Warrior.

Click on the image to zoom in and read the text.
Posted by Stryker at 18:26 2 comments:
Labels: Waffle 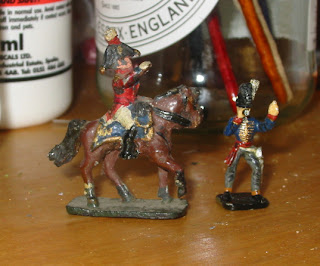 Two British officers confer on my worktable whilst awaiting the issue of new uniforms. They may have to wait some time as there are quite a few fellows queued up in front of them.

The mounted figure is a one piece casting of a British General. This is one of the better of the Hinton Hunt mounted figures, full of character. The foot figure is a Royal Horse Artillery officer, quite nicely painted although not in my preferred style. The figures are:

I have decided on four figure crews for my artillery. The RHA officer currently has two gunners to command and is just waiting for one more recruit (and a cannon) before he can go into action.
Posted by Stryker at 10:29 No comments:
Labels: British, General Staff 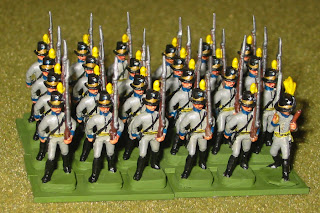 This is the first of my Swedish units on parade after refurbishing and rebasing. Rather than striping the old paint off and starting again (my usual process) I decided to give them a makeover as some of the existing detail is pretty good. I probably spent a quarter of the time that I would have if I’d painted them from scratch. This improves the chances of my completing all nine of the twenty-four figure units before my enthusiasm runs out (yeah, right!).

When the Swedes arrived I knew zilch about the Swedish army of the Napoleonic wars and my knowledge is still pretty sketchy. I did finally manage to track down a copy of Osprey’s ‘Scandinavian Armies of the Napoleonic Wars’ and have cobbled together some other uniform information too.

This unit is apparently the 3rd Alderkreutz regiment and consists of 23 x SWN7 Swedish Infantry Marching plus an S range Minifigs officer. Now I know that strictly speaking I shouldn’t have any Minifigs in my army but I thought I would preserve the unit intact. I am reliably informed (thanks Clive) that the officer is actually an Austrian Tyrolean Jager figure AN14s.