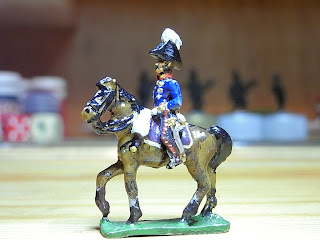 Years ago I remember my father (who was a WWII RAF Navigator W/O) telling me that after one successful attack on the German Battleship Gneisenau the wags in the RAF sent back a Morse code signal to base saying “The Gneisenau is not so Gnice now”. This has nothing whatsoever to do with this Blog except that…

One of the things Santa brought me this year was this casting of PN/61 General Gneisenau mounted on horse PNH/1. A nice little figure with a good paint job too (although not quite in my own style). He will probably survive without a repaint but we’ll see.

I’m pleased to have him as he more or less completes the General Staff for my Prussians and recreates the Command Group I had with my original Prussian army back in the early 70s. One of the aims of this project was to build up a Hinton Hunt Prussian force if I could find enough figures (which I now have) so it’s probably time that I turned my attention to painting a few more of them!
Posted by Stryker at 13:44 5 comments:
Labels: General Staff, Prussian 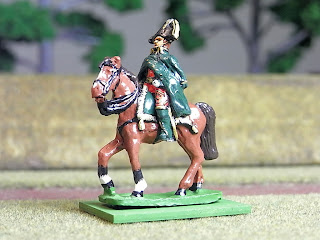 Grouchy was a Johnny-come-lately amongst the glittering ranks of Napoleon’s Marshals, being the last of them to receive a Marshal’s Baton in April 1815. His career wasn’t particularly distinguished – in fact during the battle of Novi in 1799 his attempt to surrender himself to the Austrians was misinterpreted as an ambush and he received 14 wounds before they realised their mistake. Fortunately for him the story that came out after this incident was of his heroism in trying to “resist” capture.

The Marquis was a cavalryman and he commanded the Heavy Cavalry in both Spain and Russia and led the Emperor’s personal bodyguard during the retreat from Moscow. He didn’t do much to endear himself to his colleagues – on one occasion he begged Marmont to give him a sword his men had captured from Prince Yurosov (saying that his own sword was hurting an old wound by rubbing on his hip) he then showed it off in Paris claiming to have captured it himself. It’s not surprising then that history has pinned a large part of the blame for Napoleon’s defeat at Waterloo upon him. Whether this is fair or not I really do not know.

I adopted a novel approaching to varnishing this figure – after spending two evenings carefully painting him I managed to accidentally drop the poor Marshal directly into my pot of Humbrol Satin-Cote. Rather bizarrely, when I had fished him out and brushed him off, he actually dried with a proper sheen rather than the annoying glossy effect I’ve been achieving of late. Perhaps this is the answer to my varnishing problems.

Hinton Hunt didn’t make a figure of Marshal Grouchy so I used FN/354 Marshal Ney with riding coat worn over his shoulders mounted on horse BNH/10 instead. This is a repaint of the scary looking figure originally posted here.
Posted by Stryker at 19:53 8 comments:
Labels: French, General Staff

“In most battles the Guard Artillery is the deciding factor since having it always at hand, I can take it wherever it is needed.” -Napoleon Bonaparte 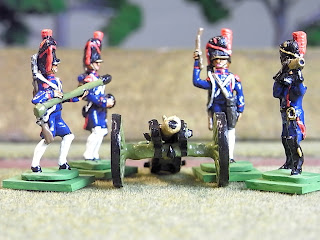 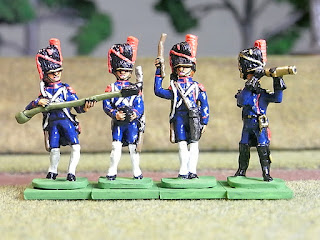 In my House Rules the Guard Artillery are allowed to re-roll 4 dice when firing. I’m looking forward to trying them out on the table.
Posted by Stryker at 17:54 5 comments:
Labels: Artillery, French, Guard

During our visit to London back in the summer we spent half a day looking around The Tower of London. While we were there I snapped this picture of some Napoleonic French artillery pieces that had been captured during the Waterloo campaign. 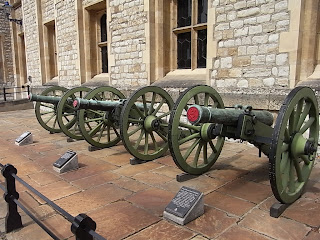 Captured French artillery pieces at The Tower of London

It wasn’t really clear if these pieces had been captured on the main battlefield or if they were acquired at some other point during the campaign but it was slightly eerie to see such a tangible link to the Napoleonic past. Only the cannons themselves are original, the carriages being later – but accurate - reconstructions. I took the picture mainly to help me try to get the right colour green for my own model guns and I finally settled on Foundry 28B Phlegm Green as the closest match. I am lucky to have been given two Hinton Hunt French guns (A/3) some time ago and wanted to give my Guard Foot Artillery crew one of these original HH models to serve. 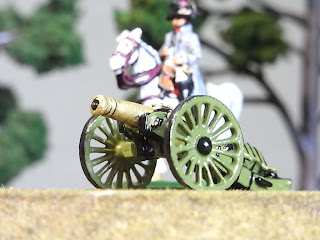 The Emperor with his daughter  (Hinton Hunt A/3)

I have mentioned before that Hinton Hunt artillery models are a bit out of scale with the figures being on the small side. However, it seems only right and proper to assign one of these rarities to the Guard.
Posted by Stryker at 20:25 7 comments:
Labels: Artillery
Newer Posts Older Posts Home
Subscribe to: Posts (Atom)