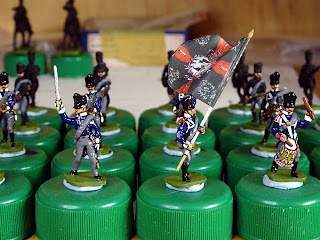 It’s been a busy few weeks with not much painting time and even less blogging time, but I have managed to churn out the first half of my final Prussian Musketeer unit. This one is a Colberg regiment with white collar and cuffs and red shoulder straps.

Being the final of the three charging figure units I’ve had to scrape the bottom of the barrel for recruits with a mixture of vintage (not many), reproduction and Clayton figures to make up the numbers. The Clayton’s, although ‘official’ castings, are the weediest of the bunch and are orientated slightly differently on their bases to the original figures and their muskets are held at a lower angle.

I’m not sure how long it’s going to take to get these finished as we have a few more busy weeks ahead, but I’m aiming to get them done by the end of June.
Posted by Stryker at 19:31 10 comments:
Labels: David Clayton Figures, Prussian

The Battle for the Hill

Yesterday I was joined by Wellington Man, Goya and the Archduke (Nigel) for a game of soldiers. WM had brought a small French expeditionary force with him comprised of three infantry units, the Guard Chasseurs and 7th Polish Lancers. Despite some minor damage in transit from New Zealand WM’s troops still looked splendid when they took their place in the French line.

The French army (Goya and Nigel) was opposed by my Prussians supported by Austrians and Russians (Myself and WM). In theory the two armies were balanced at 12 infantry and 5 cavalry each however due to some poor staff work on my part the French had a 6 to 4 advantage in cavalry which was to have a significant influence on events.

The scenario was simple, there were 3 victory locations in the centre of the table each worth 5 VP’s. Additionally, 1 VP was awarded for each enemy routed unit. The side with the most VP’s at the end of play was the winner. The rules as ever were Muskets & Marshals, here are the highlights -

Thanks to WM for bringing his troops (and himself) halfway around the world to the game and to Nigel for making the 7 hour round trip across the border and back. Thanks also to Goya for producing 3 units for the game finished in gloss varnish even though this was against his principles (I believe they are being doused in matt varnish as I write!). Another good game played in great company.
Posted by Stryker at 20:34 22 comments:
Labels: Battle for the Hill, Playing Soldiers
Newer Posts Older Posts Home
Subscribe to: Posts (Atom)