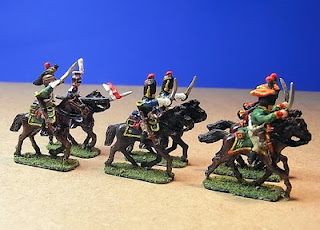 I am pleased to say that the ranks of the Imperial Guard were increased in number this morning with the arrival of this splendid composite squadron of cavalry. These figures are all Der Kriegspielers rather than Hinton Hunt but they very closely resemble the latter and are not as thin as some other DK types in my possession. They are:

The figures are courtesy of Don who sent them all the way from the US and the Emperor in particular was very pleased to see them. My favourites are the Chasseur-a-cheval with their nice green and red uniforms.

The arrival of this squadron following so closely on the arrival of the Poles has got me into Imperial Guard mode. A quick look through the inventory shows me that I now have (in addition to the two cavalry squadrons) 1 x battalion Old Guard, 1 x battalion Young Guard, 2 x foot batteries, 1 x horse battery and nearly a whole battalion of Marines. I just wish that my inventory also included unlimited painting time.
Posted by Stryker at 18:17 5 comments:
Labels: French, Guard 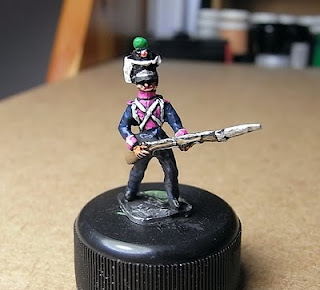 I have allowed myself to become distracted from painting French Grenadiers into trying out a test figure for my unit of Polish infantry. This chap is WN13 Grand Duchy of Warsaw, Fusilier, charging.

I think it is the lancer style cap (czapska) that appeals to me but I have always thought that the Polish contingent of Napoleon’s Grand Armee was the most dashing. I have painted this one up as a member of the 8th Infantry Regiment (with help on the uniform from Rafa) and the final unit will comprise two companies of Fusiliers, one of Grenadiers and one of Voltigeurs.

I find it takes me a few sessions to come up with a final look when painting up Hinton Hunts and in this case I’m trying to work out if I like the blue of the uniform. I’ve used the Foundry French Blue for the first time but am a bit disappointed, as it looks too dark. This may be a problem of using their 3-shade system where I’m only selecting a single shade for block painting. The dark shade is too dark and the medium shade too light so I’ve had to try a bit of highlighting but I’m still not sure – any thoughts?
Posted by Stryker at 09:32 8 comments:
Labels: Polish

I had a copy of The Battle of Lansdown by John Wroughton for my birthday and last weekend finally managed to get out and do the full battlefield walk it describes. I had done part of the walk many years ago but that was before the recent signage had been put in place by the Battlefield Trust that makes understanding the landscape a whole lot easier. 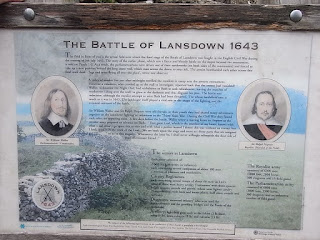 My companion for the morning was Andy who is a keen walker rather than a military history buff and who kindly put up with my ill-informed historical ramblings as we trudged across the field. Being a proper walker Andy also came prepared with a supply of Eccles cakes to stave off hunger and I was pretty glad of this by the time we got half way around. 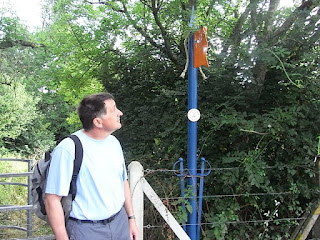 We parked on the road near the monument and followed the lane to the left that leads to Hanging Hill and the extreme left of the Parliamentarian position. The view from this point takes in the whole valley below and Freezing Hill beyond where the Royalists were initially encamped. 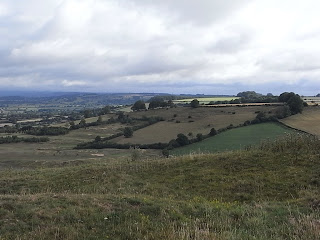 Cutting across the field to our front the footpath dropped off quite steeply down towards the valley where we joined the lane that leads to the foot of Freezing Hill. On the morning of 5th July 1643 Hopton’s Royalist army was entrenched on the top of this hill facing Waller’s Parliamentarians across the valley. 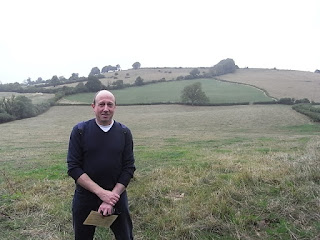 Looking up Freezing Hill - it looks a lot steeper on the ground!

We climbed to the top of Freezing Hill through the site of the old earthworks and I admit I found it pretty hard going carrying a small rucksack and an Eccles cake, just how you would carry a sixteen foot pike up that hill I really don’t know. From the top it’s hard to understand why the Royalists ever decided to quit the position and attack the enemy on the other side of the valley but that’s what they did and with some success. 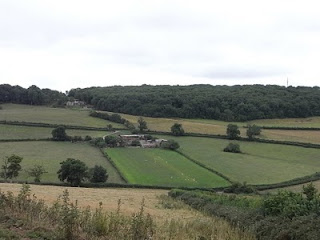 Looking from Freezing Hill towards Lansdown

Descending Freezing Hill we took a left and, crossing the main road, (do be careful it’s a very busy road) followed the lane to Lower Hamswell then up again by a path to the point where the extreme right of the Parliamentarian line had been. For a while here the path forms part of the Cotswold Way and the views of the surrounding countryside are fabulous. Finally we ended up at Waller’s wall, which was the scene of the final act of the battle where Waller’s men made their last stand before slipping away to Bath under cover of night. The battle was claimed as a Royalist victory but was really pretty much a draw. 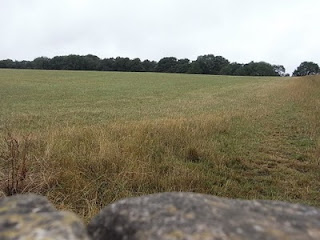 The whole walk took about three hours and although there are some steep bits there’s nothing that the average fifty-something can’t manage without lots of stops, a litre of water and, of course, an Eccles cake.

If you’re tempted to have a go then you must buy John Wroughton’s book, which comes with a separate waterproof laminated map of the walk. The correct sort of Eccles cakes can be obtained from any branch of Sainsbury’s.
Posted by Stryker at 20:12 12 comments:
Labels: Off Topic 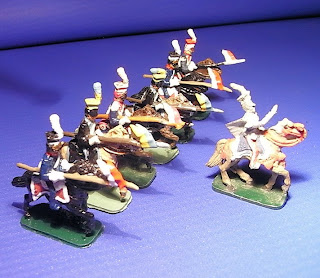 These are the most recent additions to my lead pile being part of a swap with another Hinton Hunter. The lancers are FN43 Lancer (mounted) charging and I’m particularly pleased to have them as previously I had no Imperial Guard cavalry at all. The HH catalogue says that they can be painted as either the Polish Lancers or the 2nd Red Lancers, I’m not sure yet which one I will go for. The whole lot will be stripped and repainted just as soon as I can find a space for them in the production line.

The personality figure leading them is none other than marshal Josef Anton aka Prince Poniatowski. In the HH catalogue Marcus Hinton wrote, “Prince Poniatowski was not only a hero of Poland but was one of Napoleon’s most dashing marshals. He cut a splendid figure in Lancer style uniform and fur cloak with his horse in an elaborately trimmed and tasselled harness” – can’t wait to paint this one.

I’ve mentioned before that these old one-piece figures sculpted by Marcus Hinton are something of an acquired taste being a bit on the chunky size. The lances are a weak spot on the castings and as a consequence have been over compensated for by making them rather thick and out of scale. The resulting telegraph pole effect is just another of the endearing traits of this great old figure range.
Posted by Stryker at 09:23 13 comments:
Labels: Light Cavalry, Polish 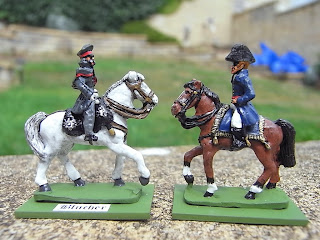 The Duke and marshal Blucher meet on the battlefield of Waterloo to swap notes and partake in some general chitchat about the day’s events. The Duke is on his trusty horse Copenhagen whilst the identity of Blucher’s mount is a bit less certain.

The setting is actually our garden wall and the battle scene is rather thin due to my lacking a suitable model of La Belle Alliance. Hovels do make a nice 25mm model of the famous Inn and I will be treating myself to this in due course.

Whilst Copenhagen is in fine fettle I have made a slight change to Blucher’s mount in line with a suggestion made by Roy some time ago and have turned the hoofs a more realistic grey colour. I really like all of the Hinton Hunt personality figures but I would have to say that the figure of Blucher is my favourite out of these two.
Posted by Stryker at 10:11 4 comments:
Labels: General Staff
Newer Posts Older Posts Home
Subscribe to: Posts (Atom)