I won’t Boer you with the details 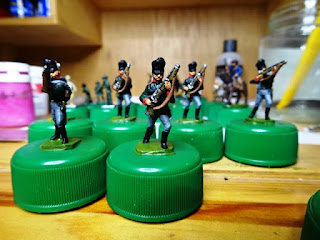 With Vintage Leipzig now rapidly approaching I am beavering away painting up… Boers…eh what? Please, you’ll just have to humour me and take a look at my little side show blog here (if you haven’t already) and perhaps leave a comment there telling me to pull myself together and get back to the Hinton Hunts.

Well I have actually been painting some – six Prussian Jagers to be precise. The idea is to expand my existing unit of 18 to a full 24 figure unit. It became pretty obvious some time back that my individually based skirmisher figures were never going to get a look in on the wargame table as they are too fiddly to use in the large games we have been playing. Reluctantly I decided to increase the unit size and will be rebasing them for use as close order units but still with the capability to deploy as skirmishers if I wish.

This does have an upside though as I have 5 units of skirmishers which means if I paint just 30 figures I will increase the order of battle significantly without having to go through the tedium of painting 24 figures at a time. After the Prussians I will turn my attention to the Austrian Tyrolean Jagers in the hope of having them ready for the great day.
Posted by Stryker at 20:22 13 comments:
Labels: Prussian, Vintage Leipzig

In a project already crammed with nostalgia (for me) here is possibly the most nostalgic unit of them all – the 2nd East Prussian Cuirassiers. All these figures bar one are vintage Hinton Hunt castings of PN.77 Prussian Cuirassier (mounted) charging and the odd one is a Clayton casting of superior quality. They’ve taken me the best part of six months to complete and involved painting somewhere in the region of 380 buttons. I hope you like them.