These boys are some of the oldest Old Guard around, all of them are vintage Hinton Hunt figures and many amongst them date from the mid nineteen-sixties making them nearly 50 years old. 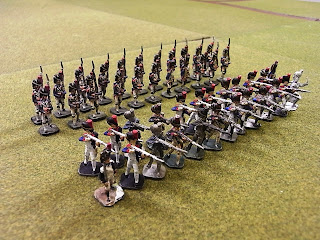 All old timers, except for the dubious drummer at the end of the line!

The marching pose (FN29), were in the first batch of figures I bought from eBay at the start of this project and are really the stars of my collection. The quality of the castings and the ageing paint job confirm their provenance and they are simply superb examples of Marcus Hinton’s work. 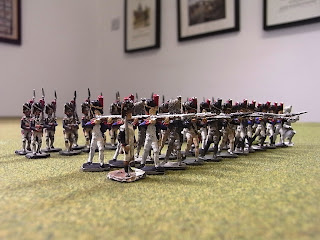 If anyone can take on those British Guards surely it's these lads...

The firing figures (FN23) have come from a variety of sources and it has taken me some time to accumulate the 24 that I need to make up a unit. I have a fondness for this particular figure because it was the very first Hinton Hunt casting I ever saw. This was because Dave and I received one as a sample with our first Hinton Hunt Catalogue in about 1968. I kept that figure for years and years and unbelievably must have thrown it away in a clear-out because I no longer have it – doh! 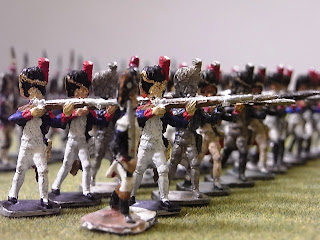 Lovely figures deserving of a better paint job than this!

I’ve decided that the time has come to tackle the Guard and they will be the next units that I paint. The old paint will be stripped from the figures, using my usual bleach method, and after any repairs (one or two need bayonets) I will begin the re-painting process. This will probably take me quite a long time, and I still have to finish those French Light Infantry, but hopefully I’ll eventually be able to return these figures to the wargame table, which is where they belong.
Posted by Stryker at 11:10 7 comments:
Labels: French, Guard
Newer Posts Older Posts Home
Subscribe to: Posts (Atom)