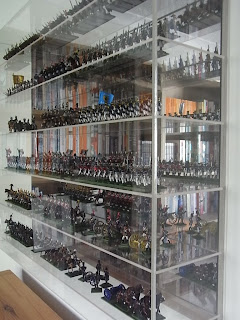 I’ve finally got the troops back in the display cabinet and in keeping with the excitement (not) of the forthcoming UK election I have had my very own cabinet reshuffle. When Mrs S gave me the cabinet four years ago I didn’t have very many completed Hinton Hunts to put in it so they were forced to share with a motley collection of 15mm Napoleonic and ACW types. My new rule is that only my HH and DK figures will be displayed and as new units are added they will be given this honour in rotation – a bit like mounting guard at Buckingham Palace.

The cabinet is almost impossible to photograph because of the glare from the acrylic front and the reflection from the mirrored back. Also, any attempt to take a picture from the front results in a lovely reflected picture of me and the camera and not very much of the figures on display. This is about the best I can do and I suppose I could pretend it was a deliberately arty shot with the reflection of the bookshelves superimposed on the back of the cabinet. Anyway I hope it gives the general idea.

All that remains now is to properly unpack the painting gear and get painting Hinton Hunts again. This may well be a little way off as I still have a few outstanding DIY jobs to complete. We’re also supposed to be heading to New York for a few days soon as part of Mrs S’s birthday extravaganza but I’m keeping my eye on that darn volcano.
Posted by Stryker at 10:05 6 comments:
Labels: On Manoeuvres, Waffle

I managed to find time yesterday to fix the display cabinet to the wall of my new study/hobby room. I’m still a little way off resuming painting but I hope to unpack all the Hinton Hunts soon and get them back into the cabinet at least. 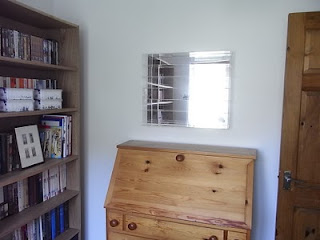 The display cabinet in situ in my new study. You can just make out some of the troops waiting patiently in boxes full of the dreaded poly-beads on the bookshelves.

The display cabinet is pretty neat because the shelves have a mirrored back to them so you can view the front and rear of the figures at the same time. The whole thing is covered with an easy to remove Perspex case and all the fixings are cleverly hidden so it looks nice and sleek. The only figure on show at the moment is marshal Ney because he came into my possession just before our move and after the rest of the lads had already been packed away. 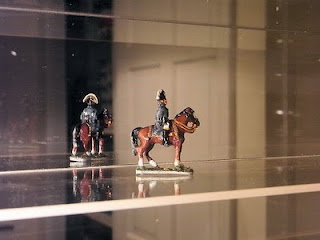 Marshal Ney - a rather dashing if somewhat lonely figure at the moment.

Back in the early 70s my Dad helped me make a wooden cabinet for my original Hinton Hunt collection. It was a bit more rough and ready than this one but it had sliding glass doors and was big enough to take my entire HH Prussian army plus my Minifigs ECW Royalist army.

The next problem – as several of you have helpfully pointed out – is how to extract the figures from their transit boxes and the grip of those poly-beads.

A quick update in response to DC’s query about the supplier of my display cabinet. I can’t find the exact item with the mirrored back on their website anymore but this is the nearest one. The company is called “Acrylic Display Cases” (clever name eh?) and they can custom make them. Not cheap but they are the bee’s knees!
Posted by Stryker at 19:10 8 comments:
Labels: Waffle

A bit of DIY 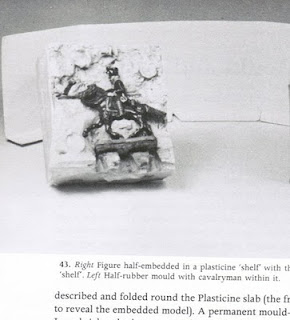 We were in Twerton chippy the other night (great veggie burger) when I chanced upon a copy of Donald Featherstone’s Better Military Modelling (1977) for sale on their charity bookshelf. I thought a quid was a fair exchange for this rather obscure title if only for the pictures of various military modellers with 70s pointy shirt collars doing strange things to Airfix figures.

As I flicked through the pages I was amazed to see that Chapter Five How to Mould and Cast Figures featured a picture showing you how to cast your very own Hinton Hunt cavalry lancer! Well I know that it has been said that Hinton Hunt Figures have suffered more than most from piracy over the years but this did seem a bit in your face. The book does say “To sell such copies not only invites prosecution but, by discouraging manufacturers, kills the goose that lays the golden eggs.” So don’t try this at home folks.

I haven’t actually tried this kind of DIY myself but I have been engaged in quite a lot of the regular variety since we moved which explains the lack of posts. The house is getting to the point where it is almost straight and I’m hoping to unpack the soldiers within the next week or two. The final DIY job will be to put up the display case and get the lads back on the shelves where they belong.
Posted by Stryker at 21:05 17 comments:
Labels: Waffle
Newer Posts Older Posts Home
Subscribe to: Posts (Atom)