There are rumours (unsubstantiated) that the French have advanced as far as Wiltshire... 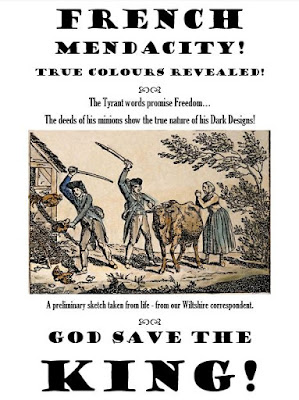 The War of Words

Both sides have been cranking up their propaganda machines as the French make a landing at Bournemouth. 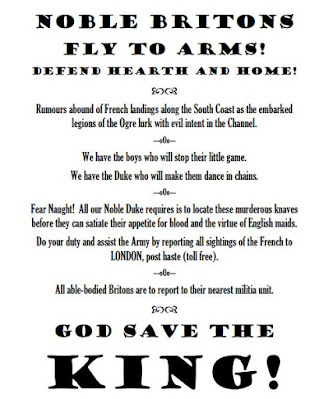 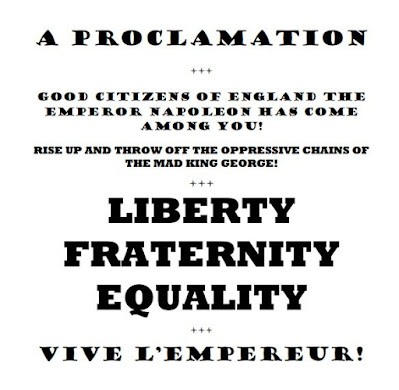 Not sure who will win the misinformation war?

The Napoleonic Invasion of Britain 1969

Back in the late 60s and early 70s I had a subscription to Miniature Warfare Magazine, the first 'proper' wargame magazine produced by John Tunstill. The content of the magazines was of variable quality and went downhill dramatically after 1971 but every now and then there would be something published that caught my imagination.

The January/February 1970 issues carried such an article entitled The Napoleonic Invasion of Britain by Bletchley Wargames Group. That sounds like a fun game I thought, Napoleon invading the green and pleasant land and the British throwing him back into the sea! At that point I didn’t have a British army or even a French one for that matter, so I never got to try out my own invasion, but the idea stuck in the back of my mind. Having recently stumbled on a link to the Murat Maps I thought the map of Southern England would be perfect for an attempt at this piece of 70s nostalgia. Better than the map used in the original game, which was a modern Ordinance Survey Map - somehow ordering Ney to “advance up the A24 and take the second exit from the Horsham roundabout on to the A264” never really did sound right to me. The Murat Maps (click here) are a great free resource with potential (perhaps one day) to provide the basis for a huge Napoleonic campaign. 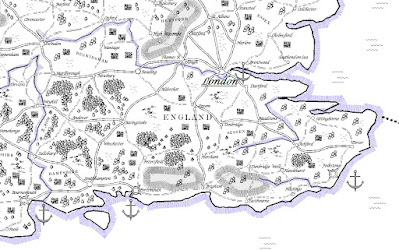 So, fortunately Rob has agreed to be my opponent in a play-by-email version of the campaign, and I’ll fight any resulting table battles as solo affairs. For hidden movement without an Umpire we will be using a 21st century version of Featherstone's 'Matchbox' system using the tabs on an Excel spreadsheet instead of matchboxes.

I have split the OOB’s for each army into quite small forces in the hope the campaign will throw up some interesting smallish scenarios that should be fun as solo games. I’ll see how we get on and keep you posted.

As part of my continuing project to increase all my 6-figure cavalry squadrons to full 12-figure units I thought it was time to turn my attention to the French. You may recall that I have some line lancers (FN/118 one-piece Lancer) that Don gave me that form half of my Lancer/Chasseur unit and these have been designated as next in line for an upgrade. 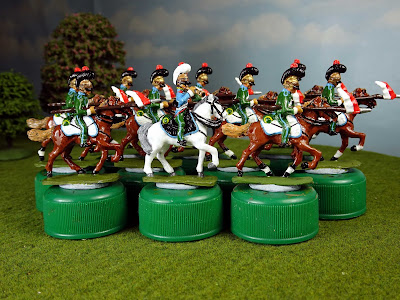 This has proved more time consuming than I had hoped as I have pretty much had to repaint the existing figures as well as paint up six additional ones. I find retouching existing paintwork is generally more work than starting from scratch because apart from colour matching I have to adapt my style to fit in with the original painter’s work. In this instance I’ve had to get by without any black lining which I find hard.

With the addition of sky-blue facings, the unit will now represent the 5th Chevau-Legers-Lancers as per the Hinton Hunt painting instruction sheet. I did have fun making the trumpeter conversion (from FN/320 2-piece Lancer) possibly my favourite conversion so far. I have two more figures to paint and then they'll be ready for basing.

I painted the first six figures for this unit some 12 years ago, but I’m pleased to have finally expanded them to a full regiment which is no less than these splendid gentlemen deserve. They should be mounted on black horses, but I didn’t know this when I started work on them, so they are mostly on a mixture of dark brown mounts. All the figures are vintage Hinton Hunt castings of BN/60 Household Cavalry Trooper (mounted) charging. 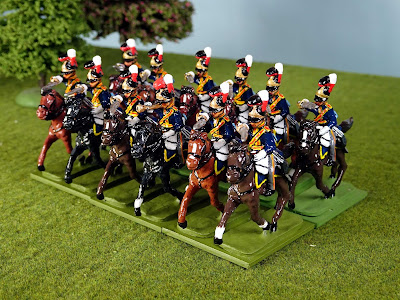 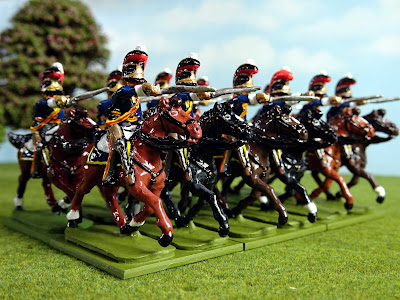 Next I'll be evening things up a bit by working on some French cavalry.
Posted by Stryker at 19:56 20 comments:
Labels: British, Guard, Heavy Cavalry

I’ve just put the finishing touches to the last of the Blues ‘officers’ so they just need to be based and the unit is done. They do look quite smart, and painting these has certainly made a bit of a change from all those red heavies. 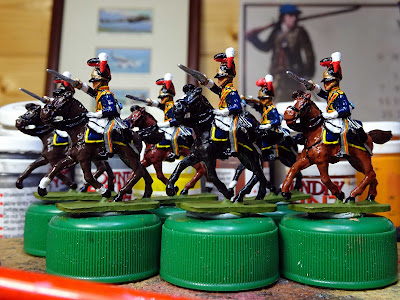 This means that I now have four regiments of British Heavy Cavalry which is a bit excessive I admit but one great thing about a retro project like this is that you can do whatever you want. I’m sure that back in the day we all took part in wargames that had a whole Division of Scots Greys, and three battalions of the 95th Rifles so why not?

There will eventually be one more unit of heavies as I can’t really ignore the Life Guards can I?