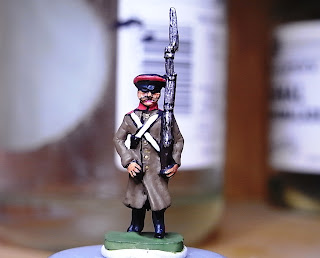 Painting time has been a bit thin on the ground here so far this year but by a herculean effort I managed to finish this single figure. He is an Imperial Russian infantryman in soft cap and long greatcoat - RC/17 Russian private, marching.

At a stroke this chap doubles my Hinton Hunt Crimean War collection. Will there be more? Well, probably not although I do find myself strangely drawn to the British 17th Lancer figure glinting at me from the lead pile.

The Crimean Russian figures are not amongst the best of Marcus Hinton's sculpts being a bit spindly. Even back in the day I wasn't sure about them after seeing a photo review in Miniature Warfare magazine (probably a late 60s issue) which was a shame because I might have otherwise been tempted to buy some.

This figure is another of the ones kindly sent to me by John C.
Posted by Stryker at 20:37 9 comments:
Labels: Crimean War 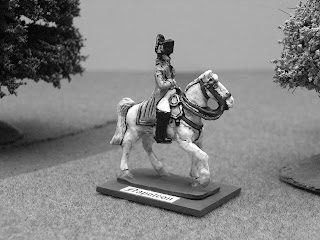 Following the recent play test and rule revisions, I finally got around to finishing version 4 of my Napoleonic rules Muskets & Marshals. These rules have been written specifically for use with my Hinton Hunt armies with the idea of producing a fun game that’s quick to play. I’m not totally happy with the finished result (more like 90% happy) but I thought it was time I made the rules available because I know quite a few of you would like to see them.

In addition to the full rule set I have also produced a sheet of order markers and one of morale markers for use with the game.

As the rules have been written for my own use there will undoubtedly be bits of missing or unclear explanation so please feel free to contact me with any questions (an email link is available via my profile). I’d also be very grateful for any feedback or suggestions from those of you who decide to try them out on the tabletop.
Posted by Stryker at 19:20 7 comments:
Labels: Muskets & Marshals, Playing Soldiers
Newer Posts Older Posts Home
Subscribe to: Posts (Atom)