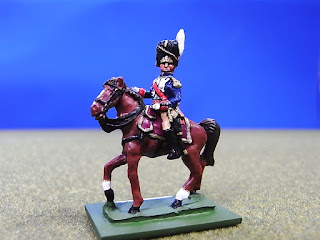 Jean Dorsenne first came to Napoleon’s attention in the early Revolutionary campaigns in Italy and Egypt where his heroic conduct won him promotion to chef de battalion. He was admitted to the Guard when it was formed in 1805 and his performance at Austerlitz won him further promotion to full Colonel followed swiftly by elevation to the rank of Brigadier General.

Soon Dorsenne was given command of the Foot Grenadiers of the Imperial Guard which he commanded at Eylau. He later served in Spain before being recalled by the Emperor in time to fight at Ratisbon and Aspern-Essling where he received a serious head wound from a cannonball. He recovered enough to take part in the battle of Wagram and was then shipped off to Spain once more to serve as governor of Burgos. In 1812 he began to suffer severe headaches caused by his wound (hardly surprising when a cannonball has bounced off your head) and died after an operation.

This figure FN/360 GENERAL DORSENNE in uniform of Colonel General of Grenadiers on horse FNH/10 will be commanding my own 2nd Grenadiers of the Guard until such time as the 1st battalion is mustered. General Dorsenne was last seen here (click) on this blog.
Posted by Stryker at 20:46 11 comments:
Labels: French, General Staff, Guard

Matt sent me the other half of the Brandenburg Uhlans a couple of weeks ago and I’ve finally found time to base them up. The figures are PN.89 Prussian Uhlan Lancer (mounted) Charging and Matt has done a truly superb job of painting them – click on the images to zoom in and admire his handiwork. 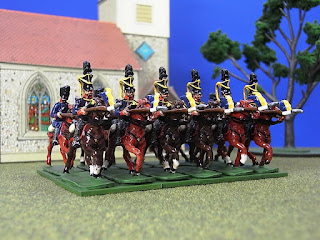 As you can see the 6 Uhlan figures have been combined with my 6 Landwehr figures to make up one full 12 figure unit. This is because I didn’t have enough of either type to make a unit of identical figures but I think they mix together well. Anyway I guess it’s not completely inconceivable that such a mix of uniforms may have existed in a Prussian unit at the time of Waterloo. 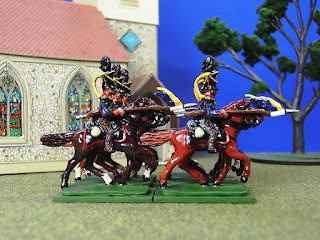 These Uhlans are particularly well travelled having been sent to me by Don in the US a few years ago. They are original Hinton Hunt castings (amongst the best I’ve ever seen) so I’m sure Don must have bought them direct from Marcus Hinton in the 70s. Having made the trip across the pond twice they then went on a bit of an adventure to New Zealand (where they nearly got lost in the international postal service) and then of course back again. Total air miles 33,370 - equivalent to marching from Berlin to Paris and back 25 times. 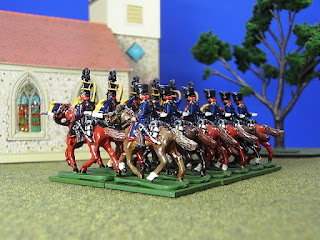 This is the last of my commissioned units for Vintage Waterloo, from now on things will slow to their usual pace as I pick up my own paint brush once again.
Posted by Stryker at 17:00 5 comments:
Labels: Light Cavalry, Prussian, Vintage Waterloo

More from Roy on Vintage Waterloo

A couple of weekends ago Roy hosted two games of Vintage Waterloo at his house with various other wargamers, none of whom had played my rule-set before. Sadly I wasn’t able to attend myself but Roy now has so many figures painted and based for Muskets & Marshals that I doubt if he missed the presence of my own troops on the table. 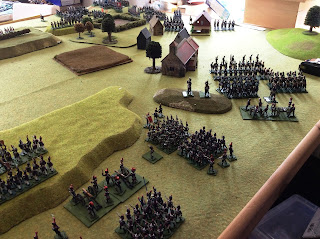 The French flank - a view from just behind Plancenoit. 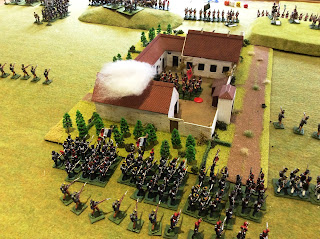 The French attack Hougoumont - apparently they found it impossible to dislodge the British foot guards within. 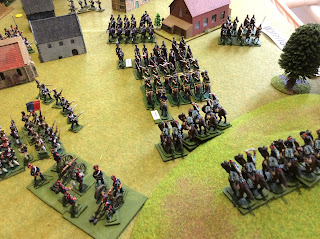 A cavalry clash at Plancenoit - I believe the Prussian lancers came off best in this encounter. 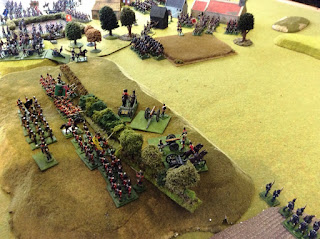 Picton's division on the ridge. 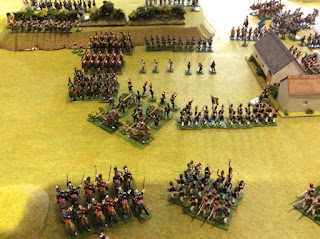 Action near La Haye Sainte - an advance by British cavalry seems to have rattled the French enough to order at least one battalion into square. 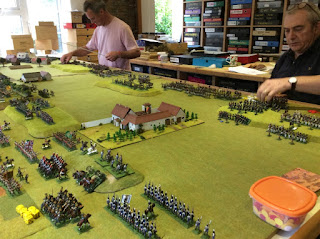 It seems from Roy’s account that the rules were well received although the brutal nature of the firing and combat system apparently took some veterans by surprise. I was very pleased to hear that on both days they managed to play about 12 game turns with 2 – 3 players per side and Roy umpiring. 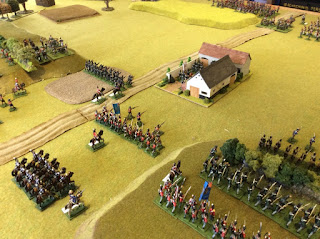 The British position behind La Haye Sainte - the terrain looks slightly shifted from the play-test game I had with Roy but at least the farm is on the correct side of the road! 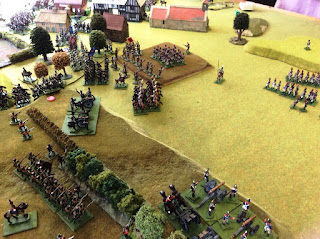 The view from behind the british left - there seems to be a fair bit of action in the area of Plancenoit. 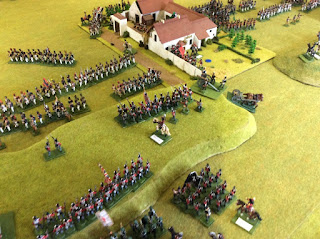 French attacking the ridge between La Haye Sainte and Hougoumont - the Duke is under pressure but still appears to have some reserves.

I’m heartened that the rules were so well received and it does seem that Roy and I have play-tested and revised them now to a point where they are giving exactly the sort of game we wanted all along. Roy and I are hoping to play our own game of Vintage Waterloo at the end of October and I am of course really looking forward to it.

All photos are by Matt B, for the latest version of my rules Muskets & Marshalls click here.
Posted by Stryker at 11:09 11 comments:
Labels: Guest Appearance, Vintage Waterloo
Newer Posts Older Posts Home
Subscribe to: Posts (Atom)