The Russian are Coming! (part 3)

While the cavalry battle was in full swing on the western flank the Emperor had been advancing in earnest against the Russian right flank. The 45th ligne and the 4th Swiss were leading followed closely by the 8th Polish regiment. Behind them in support came the columns of the combined grenadier battalion and the Austrian 51st Gabriel Spleny regiment. This whole force was screened by clouds of French skirmishers. The Russians meanwhile stayed rooted to the spot preferring to let the French take the initiative. 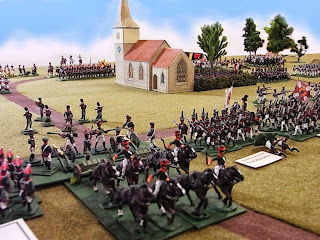 The view from behind the Russian lines (left centre) at the start of turn 4. French columns are advancing past the churchyard in the distance whilst Prussian Jagers take pot shots at the Russian gunners (foreground).

The Swiss quickly took possession of the churchyard where they deployed along the hedge gaining one vital victory point in the process (each of the major terrain features on the table was worth one VP to whoever occupied them). Meanwhile the French skirmishers were beginning to make their presence felt as they came within range of the Russian gunners and infantry. 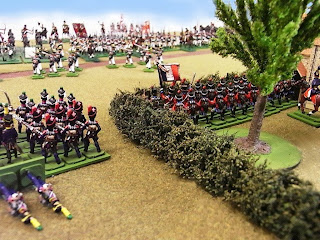 The 4th Swiss infantry regiment have occupied the churchyard while the 8th Polish regiment continue to advance and start to take casualties. 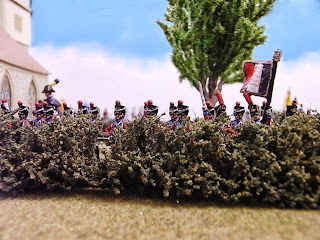 The Swiss peek over the churchyard hedge hoping that it will protect them from the Russian guns on the other side!

Soon the French columns started to come under canister fire from the two Russian batteries opposite the churchyard. The men marched determinedly on into this storm of iron with the 8th Polish infantry taking the brunt of their fire losing many casualties including the brave Prince Poniatowski. 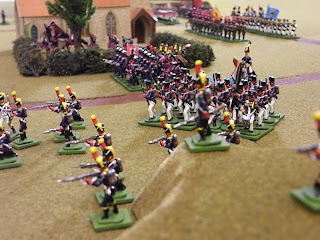 The 45th ligne advance in column on the extreme left of the French army covered by skirmishers from the elite 10th legere. 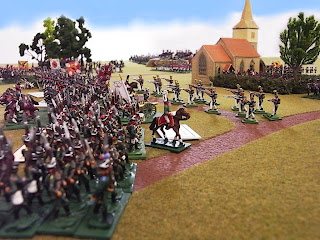 A solid wall of Russians await the advancing French - unfortunately we never got to find out what would have happened if the two lines met.

By the end of turn 6 the French attack was about to close on the Russian line whilst on the opposite flank the Russian Lancers were now bearing down on the French guns and infantry forcing two battalions into square. The battle still hung in the balance but we had run out of playing time. A quick count of VP’s yielded 3 for the French and 2 for the Russians – a technical (but not very convincing) victory for the Emperor. 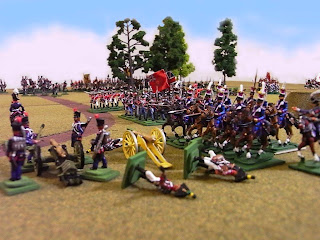 Russian lancers start to roll up the French right flank by taking out the Austrian field artillery. Behind them the British Guards have been forced into square. 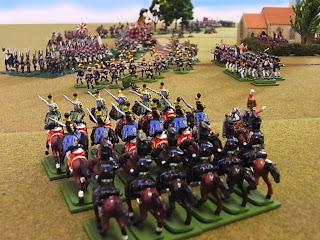 My thanks to Roy for a very enjoyable game and also for going to so much trouble to rebased his Russian army specifically for play with my Muskets & Marshals rules. It was great to have so many nicely painted Hinton Hunt figures on the table - in excess of 600 - something that may not have been seen for quite a few years! 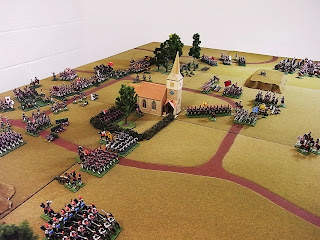 The table at the end of turn 6 - game over. Click on the image to zoom in and take a close look!

As a result of the game I have made a few tiny rule tweaks to Muskets & Marshals – the full rules are available for download here.
Posted by Stryker at 20:23 12 comments:
Labels: Battle Russians are coming, Playing Soldiers

The Russian are Coming! (part 2)

By the start of turn 3 Roy was beginning to develop his flanking attack on my right by moving three cavalry units out past the West Woods in line abreast. This cavalry force was closely supported by several infantry battalions moving up behind in column of march. Napoleon reacted to the Russian move by ordering Murat and Ponsonby to extend to the right to oppose the enemy cavalry. 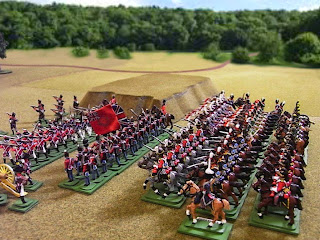 The initial dispositions on the 'French' right. The Naval battalion and Guards infantry are in line beside Western Hill. Behind them the massed ranks of Ponsonby's Union brigade and Murat's French light cavalry.

Murat moved off first with the French light cavalry followed by Ponsonby and the heavies of the Union brigade. Meanwhile Mercer’s RHA battery moved onto the Western Hill and unlimbered ready to open fire on the Russian horsemen as they approached. The Emperor was quietly confident that his forces would stop and repel the Russians. 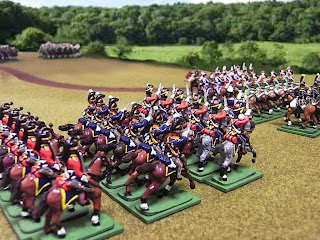 The cavalry move out to the flank. The Union brigade present a splendid sight as they pass by with the Greys to the fore. The Russian cavalry are just visible in the distance. 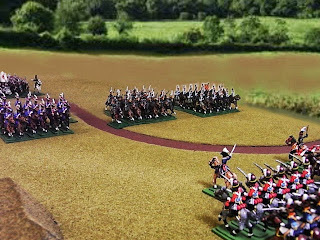 The Russian cavalry prepare to charge (Just to reassure you - these are genuine shots taken during the game, the backdrop was inserted later by Dave using some digital wizardry!).

At the start of turn 5, with both cavalry lines fully deployed, Roy ordered all three of his units to charge. I had taken the precaution of ordering my own cavalry to counter-charge but as Roy had declared his charge first it was up to me to take the first morale test. No problem I thought, unless one of my units rolled a 2 on an average die and became disordered – not very likely. I then proceeded to roll two 2’s – doh! – both my cavalry units were now disordered and therefore unable to counter-charge putting them at a considerable disadvantage in the following melee. 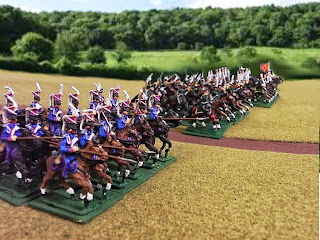 The Russian cavalry move in for the kill. The figures nearest the camera are RN42 Russian Lancer (mounted) charging. Roy has replaced the cast-on 'tree trunk' lances with wire ones - they look superb!

The jubilant Russian Cuirrassiers and Chasseurs now ploughed into my line where thanks to some more duff dice rolling coupled with some nice modifiers, they succeeded in routing both my units including the “A” rated Union brigade – the shame of it! 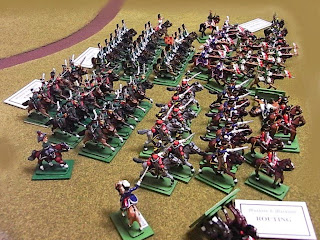 Not a pretty sight - my cavalry in full rout...

Meanwhile Roy’s lancers had conducted a neat right-wheel and charged straight for the mouths of Mercer’s guns. The British gunners got off a round of canister at close range that took out 5 of their number forcing a morale test, surely this time the dice would fall favourably for the Emperor? 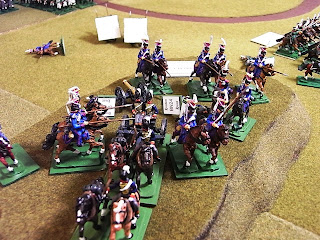 The Russian Lancers in amongst Mercer's battery - definitely not cricket.

Sadly not – the Russian troopers were soon in amongst the guns and limbers running Mercer’s poor men through with their lances in a most unsporting manner. The French right flank was wide open.

To be continued.
Posted by Stryker at 19:14 8 comments:
Labels: Battle Russians are coming, Playing Soldiers

The Russian are Coming! (part 1)

It had been rumoured for some time that a Russian army was massing across the river Avon in the heart of Gloucestershire. Now at last the Emperor was receiving firm reports that Roy had indeed raised an entire Hinton Hunt Russian army based and organised for play with Muskets & Marshals, and was marching it south down the A46. 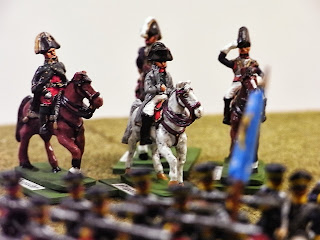 The Emperor receives word that the Russians are coming!

The battlefield - click on the image to expand it.

The Emperor remained calm and hurriedly assembled a Grand Armee to repel the invader. Drawn from the forces available the army comprised French, Poles, Austrians, Prussians, Nassauers and renegade British. Sadly the force did not include the Imperial Guard who were still awaiting a refit on my painting desk. 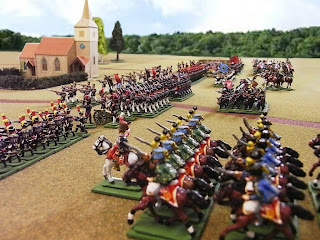 The initial dispositions of the "French" forces - Stapleton Cotton is leading the Austrian Hussars in the foreground.

The French deployed and awaited the arrival of the Russians who were slightly delayed due to a fuel spill that had caused gridlock in the centre of Bath. Roy eventually arrived and without even waiting to take a sip from his mug of coffee or a single bite from a chocolate-chip hobnob, set about deploying his troops. 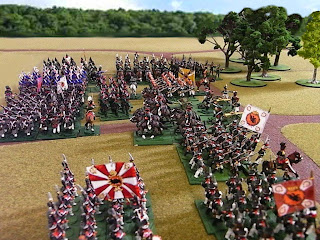 The initial Russian deployment - Roy has massed cavalry and infantry on his left flank. 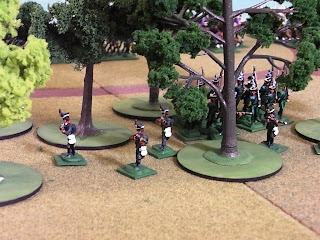 It became apparent to the Emperor that the Russians were massing cavalry and infantry behind the West Woods with the obvious intention of turning the French right flank. The Russian right flank was however refused and Napoleon saw an opportunity to advance and attack the enemy at this weak point and duly ordered his columns of infantry forward covered by clouds of skirmishers. 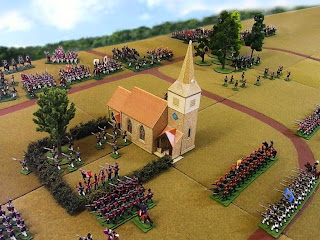 The French left advances towards the Russian line.

At the start of turn two we were both allowed to bring a further two units of infantry and one of cavalry on to the table. I decided to commit all these reserves on my left but that sly old fox Roy chose to keep his reserves off table – for now! 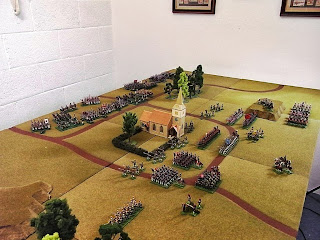 A general view of the table at the end of turn one. 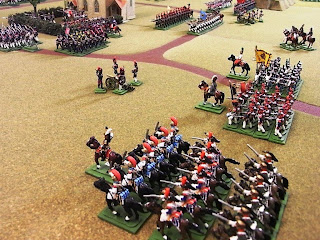 The French reinforcements arrive at the start of turn two.

My infantry continued to advance on the left and soon the 4th Swiss Regiment were in the Churchyard securing our first victory point. Elsewhere the action was confined to a long range artillery bombardment which started in a fairly desultory way but eventually gained in effectiveness on both sides. 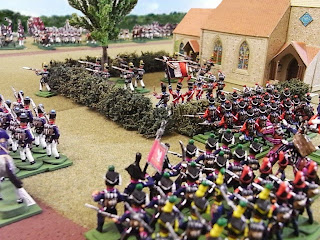 The 4th Swiss infantry occupy the Churchyard supported by the 8th Polish regiment. 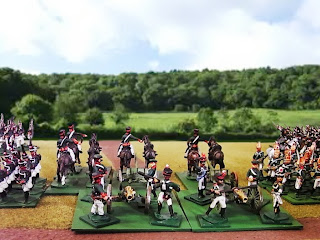 The Russian guns open fire (Roy completed those limbers the night before the game!).

Meanwhile, over on the west flank, the Russian cavalry began moving forward in force!