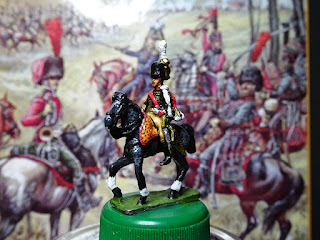 Eugene was Josephine’s son by her first marriage and was officially adopted by Napoleon in 1806 although he was excluded from the line of succession. Most accounts say he was the ablest of the family members and he retained a field command right up until the first abdication.

He served as Napoleon’s aide-de-camp in Egypt and then as a Captain in the Guard Chasseurs a Cheval at Marengo where he led a cavalry charge that wiped out half his command. He was promoted to commander of the Imperial Guard and then to C-in-C of the Army of Italy. Eugene fought at Raab, Wagram, Borodino and Lutzen but took no part in the 100 Days.

FN/352 Eugene de Beauharnais uniformed as Colonel of the Chasseurs a Cheval on modified horse BHN/11. I didn’t have the Hinton Hunt painting instructions for this one so based him on an illustration from a link sent to me by Roy.

Eugene will shortly be getting another chance to fight the Battle of Raab.
Posted by Stryker at 19:23 14 comments:
Labels: General Staff 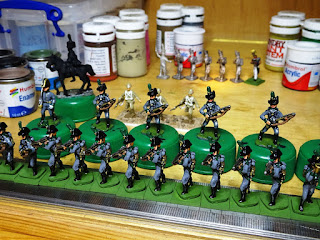 These guys are not lonely goatherds but rather rough tough Austrian Tyrolean Jagers. They can fight just as well as they Yodel being crack shots with their rifles.

According to the napoleonistyka website General de Ligne wrote: "You should not tell a recruit: 'I will make you into a jager !' You must instead take them from the forests. They know how to perch on a rock, how to conceal themselves in one of those fissures which open in the ground after a great drought, or hide behind a mighty oak. They make their way slowly and softly, so as not to make any sound, and in such a way they can creep up on a post and take it by surprise, or shoot down the enemy generals.

Sound like a very good unit to have on your side. All I need to do now is re-base these lads to my new light infantry system.
Posted by Stryker at 17:36 12 comments:
Labels: Austrian, Skirmishers

Careful with that modelling knife Eugene 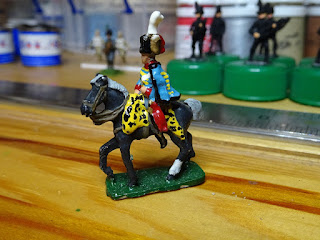 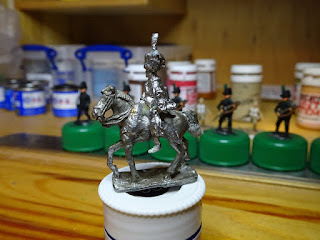 I can’t remember exactly how I came by this casting of FN/352 Eugene De Beauharnais but he has languished at the bottom of my lead pile for some time as I assumed from his rather hideous appearance that he was a poor copy of the Hinton Hunt figure. However when Tony asked me if I had a Eugene available to command the Franco-Italian army in our forthcoming game I thought I’d dig him out and see what, if anything, could be done with him.

The figure had been painted with a thick coat of gloss paint which hid most of the detail and I was pleasantly surprised to see this reappear as the casting emerged from its overnight bleach bath. Far from being a copy it turns out that the figure is almost certainly a Clayton one whilst the horse is a vintage casting of BNH/11.

The rider had been ‘welded’ to his saddle with copious amounts of Araldite so I didn’t want to try to remove him to put him on a more appropriate mount. Instead I have added to the horses docked tail to make it look more French (if a horse can look French that is) and also given poor Eugene some feet as these were missing. I’m now looking forward to painting this one.
Posted by Stryker at 17:45 17 comments:
Labels: French, General Staff 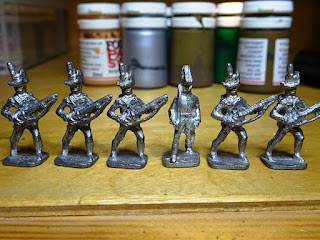 I am amazed to see that it is ten years since I painted my unit of Tyrolean Jagers (click here). They haven’t featured very heavily on the blog since and this is mainly due to them being an 18 figure strong individually based skirmish unit. As I’ve noted before we haven’t used the individual skirmishers in the large games played of late.

So in line with my new policy of making my 18 figure units up to 24 figures the Jagers are about to be expanded. The advancing figures are actually DK101 but they are a perfect fit with their Hinton Hunt brothers. The marching officer is a genuine vintage Hinton Hunt casting and a very nice one too.

There is a bit of a sense of urgency about this as I want to get the unit ready for a game to be hosted by the famous Goya. It will be another C&C game featuring Austrians against Tony’s French forces on an expanded board. Let’s hope my beginners luck with the dice holds out.
Posted by Stryker at 09:25 16 comments:
Labels: Austrian, Der Kreigspieler, Skirmishers
Newer Posts Older Posts Home
Subscribe to: Posts (Atom)