Yesterday we knocked the snow off our boots and convened at Goya’s house to play another Commands and Colours game; this time it was the Battle of Möckern, October 1813. For this scenario we used a standard board as we were only fighting the French left flank position. I played the French and Goya the Prussians, Tony acted as aide-de-camp and umpire.


It was another great day of wargaming (and talking toy soldiers) with a superb warming lunch served by Goya. This time however we gave the garden a miss as, being a soft southerner, zero degrees Celsius was a bit chilly for me although Goya and Tony would have been out there in their T-shirts and kilts given half a chance.
Posted by Stryker at 17:20 14 comments:
Labels: Commands & Colors, Playing Soldiers

I spent many hours in my youth leafing through my Hinton Hunt catalogue (I didn’t get out much) but one page held a particular fascination for me, the very first one. This is the page that had all the listings for the Imperial Guard. I had heard of the Old Guard thanks to the film Waterloo but the Young Guard was a bit of a mystery as the only information I had was that written by Marcus Hinton:

"The Young Guard was formed to increase the numbers of Imperial Guard Regiments on which Napoleon greatly relied and also to eventually be recruited into the ranks of the Old Guard. The Young Guard wore corded shakos, short tailed coats, waistcoats, knee breeches and short gaiters. The Tirailleurs wore round pom-poms on their shakos and had pointed shoulder straps. The Voltigeurs had tall plumes in their shakos and wore fringed epaulettes on their shoulders."

In the end I was too baffled by it all to order any Guard figures and perhaps also back then I didn’t feel my painting ability would do justice to Napoleon’s finest. Since I started this project however I have wanted to paint up a unit of Young Guard but it has been a painfully slow process to collect enough vintage figures. Finally, thanks to Clive, I have managed to assemble enough castings for a unit of Voltigeurs and have been able to make a start.
Posted by Stryker at 13:17 15 comments:
Labels: Guard 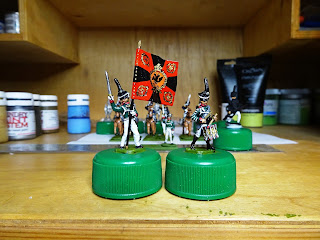 These are the really superb command figure conversions that Matt did for me together with one of his sublime Coke can flags (other soft drinks are available). I can’t tell you how pleased I am to finally have such splendid command figures for my unit of Russian Grenadiers. Marcus Hinton never produced flag-bearers or drummers for the Russian range although David Clayton did later produce some rather inferior ones so having these unique creations is great.

The Russian Grenadiers were the first unit I completed for this project over 11 years ago (before I even started this blog) and back then I never thought I would ever have more than a handful of Hinton Hunt figures. The collection has grown considerably since then but the Grenadiers are still the only completed Russian unit. Fortunately I’ve kept a notebook recording the colour shades used for this project so painting these to blend in with the earlier figures has been relatively easy.

My thanks to Matt for providing this senior regiment with its colours at long last!
Posted by Stryker at 20:35 17 comments:
Labels: Conversions, Russian

It’s all Tony’s fault that I painted these six figures as, if he hadn’t kindly donated the Brunswick Hussars to me, I wouldn’t have had the problem of having half a unit of Light Dragoons spare. Having said that though I’m really pleased to have got to grips with these castings which otherwise may never have seen the wet end of a paint brush.


The reason I may never have painted them is that all but one of them are reproduction castings and I have been trying to concentrate on working through my genuine vintage Hinton Hunt stash in line with the title of this blog. The reproductions were produced a couple of years ago to fill a big gap in my British line of battle namely my complete lack of light cavalry.


When I came to sort the figures out to complete the unit I found that I only had five useable castings so it seemed like the right thing to do to use the original vintage casting they were cloned from to complete the line up. Actually it’s almost impossible to tell the difference between the original and his children and I’m happy with the final result although of course this lot will never qualify to be more than ‘B’ grade in my rules due to their pedigree.
Posted by Stryker at 12:35 12 comments:
Labels: British, Light Cavalry

Rather predictably (for anyone who knows me) I changed my mind about the building bases I completed a few weeks ago. The plain green bases just weren’t working for me so out came the brown paint and flock, lots of flock. 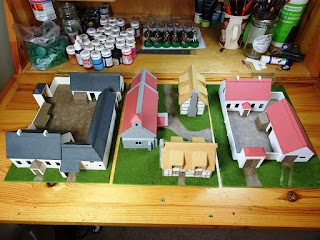 My original idea was to go for an old school look rather than a more mainstream effect however because I wargame on flocked terrain tiles the bright green bases just stood out too much. I’m happier with the way they look now being somewhat more scenic but not too much so. 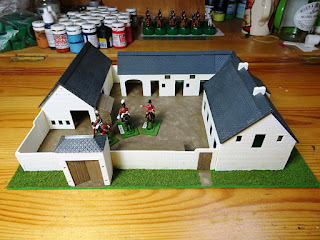 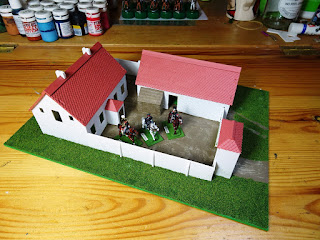 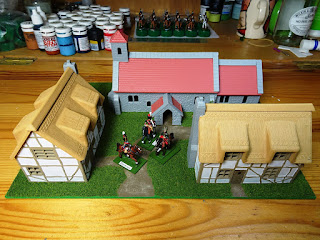 This has been a pleasant distraction from finishing the British light dragoons but hopefully I’ll have those done by the end of the week.
Posted by Stryker at 15:58 18 comments:
Labels: Scenery 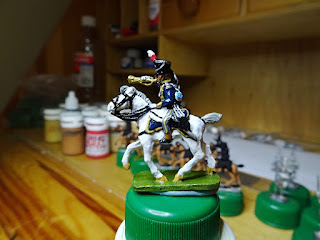 Or is it a bugle? I have no idea but whatever it is my completed and painted conversion for the 11th Light Dragoons is holding it.

I’ve said it before that I find Hinton Hunt one-piece cavalry castings can be tricky to paint and they’re certainly not everyone’s cup of tea aesthetically. The later two-piece castings are less chunky and perhaps more pleasing to the eye. However, I like the challenge these older figures present and I’m quite happy with the way this one turned out.

The first half of this unit was painted by Matt G a couple of years ago before I managed to get hold of a copy of the Hinton Hunt painting instructions (thanks Clive) otherwise I would have chosen them to represent the 12th regiment as specified. One thing I have noted is that there is a lot more uniform detail mentioned in the instructions than I could ever hope to paint (or for that matter find) on the figure. This may stem from the fact that Marcus Hinton was an expert on Napoleonic uniforms and perhaps some of the detail just never made it onto the figures e.g. the shabraque “yellow crown above G.R. with XII below and L.D. beneath” – hmm, I think a blob will do!
Posted by Stryker at 13:55 16 comments:
Labels: British, Conversions, Light Cavalry

I finally have one part of this project which I can categorically say is completed – the Prussian artillery. I know it’s definitely done as I have used all bar two of the Prussian artillerymen in the lead pile. These extra figures and guns bring the total to four batteries which is the maximum I will need for my projected Prussian army.


The figures used are mostly Clayton castings with one or two vintage figures and a couple of DKs thrown in for good measure. Interestingly there are virtually no differences between the three manufacturers output although one or two of the Clayton’s had miscast bases which had to be made good before painting.


For a touch of nostalgia I have tried to recreate a photo from a 1971 (annoyingly this one is printed without the issue number) edition of Miniature Warfare. The original photo was a huge inspiration to my 14 year old self being one of a series showing the collection of Hinton Hunt Prussian figures belonging to Stephen Connolly.