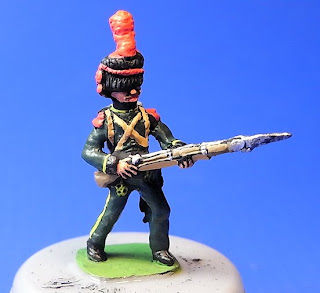 This is a test figure of NN2 Nassau Grenadier (charging) that I painted a couple of weeks ago. I really like the pose of this one and he was relatively straightforward to paint. It’s a strange thing with the figures Marcus Hinton produced how some are really excellent sculpts while others do seem to be a bit lacking. I’m not sure if Hinton sculpted all the figures himself but certainly this one is one of the better offerings.

I’m very fortunate that Matt (my secret weapon) has agreed to paint up the rest of the unit for me. This means that I have had the fun part of working out the way I want them to look without the hard work of mass production. Matt’s work is superb and he puts me to shame with the sheer speed of his output but at the moment this is a huge help to me.

Now I do feel a bit guilty about all this as part of the point of this project was that I was going to paint all the figures myself. However a couple of things have changed since I started this blog; firstly I have accumulated way more figures than I ever thought possible and secondly I have less time to paint them than I did back then. The result is (as regular readers may have noted) a bit of a drought of painted figures, in fact I still haven’t completed the unit of French grenadiers I started last autumn. I do intend to rectify this in the future but for now I am very glad of Matt’s help.
Posted by Stryker at 17:27 3 comments:
Labels: Nassau

Checking back through my postings I see that I completed my first version of the famous French 45th Regiment of the Line back in April 2008. Since then they have been staring back at me from the display cabinet proudly showing their two Imperial eagles. The fact that they had an extra eagle was not just a contingency in case they lost one to the Scots Greys (who’ve been eyeing them up from the middle of the same shelf) but because I was short of three fusilier figures to make up the numbers.

Thanks to the generosity of Paul however the three missing figures of FN5 Fusilier (charging) turned up here a few weeks ago and I have finally got around to painting and basing them up. The result seemed so pleasing that Marshal Lannes just had to assemble the battalion and put them through some drill. 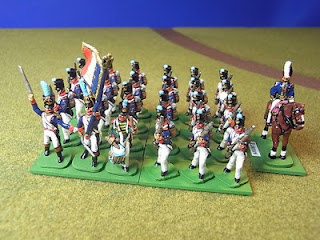 The battalion form column of attack 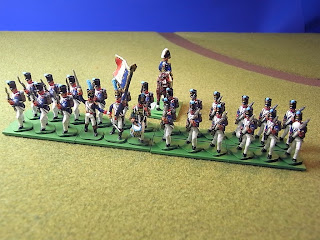 They quickly manoeuvre into line 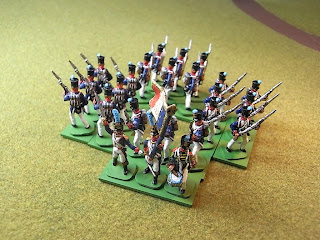 And then into square (this is one they really do need to get smarter at!) 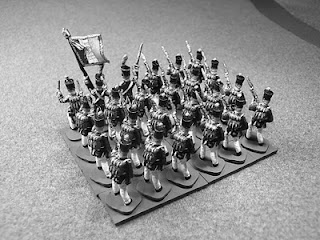 And finally they go back in time to the 1960s
(Apologies for the poor lighting in the above photos but I still haven’t properly set up a studio area since we moved to our new house)
Posted by Stryker at 19:59 6 comments:
Labels: French 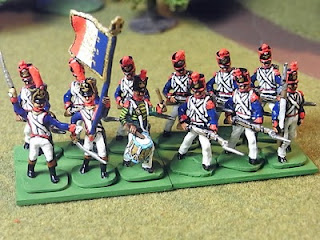 Those of you who have read through my old post may remember that my French fusilier unit (the 45th regiment) was short of three figures to make up a full complement of 24. I got over this problem by introducing a second command group but this solution has slightly bugged me ever since because it doesn’t really look right.

As a result I decided to reorganise my French infantry by mixing grenadier figures (of which I have a full 24) in with the fusiliers so that I would end up with two units each with 12 fusiliers and 12 grenadiers. This was the route I settled on and I duly started painting up grenadier figures – albeit at an exceptionally slow pace. However, Paul managed to convince me that my original plan to have a full unit of fusiliers was better than mixing them up and went so far as to send me the three extra figures I needed to achieve this.

This means that the grenadiers are now being formed into their own unit, which is ok historically as the grenadier companies of several battalions were sometimes formed into composite units anyway. It has also freed up my extra command group, which after a quick repaint of plumes have been transformed into grenadiers. Now I know that grenadiers didn’t actually carry standards and eagles but I do like to see a flag with my units. Anyway, the picture shows my grenadier battalion so far and I just need to paint up another 12 figures to complete it - no problem.
Posted by Stryker at 08:41 3 comments:
Labels: French
Newer Posts Older Posts Home
Subscribe to: Posts (Atom)