I still haven’t got those French grenadiers finished although the last three figures are sat on my work table in black undercoat looking a bit sorry for themselves – I will get them finished before Christmas. In the meantime I thought I would take the opportunity to post some more pictures of the splendid work Matt did on my Swiss infantry.

The 4th Swiss in line. 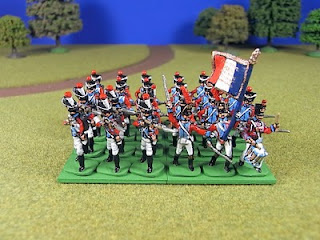 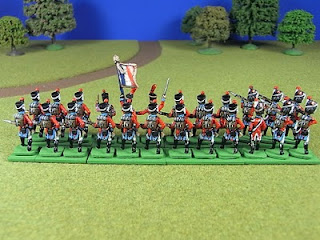 Here they are from the rear – not running away, this is the view their supports would have. 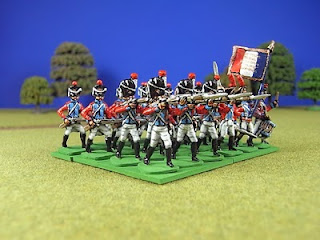 One of the reasons I’ve not been painting recently is that we took a trip north of the border last weekend to visit our daughter in Perth (that’s the original one in Scotland not the one in Oz). Whilst up there we were taken to Killiecrankie ‘gateway to the highlands’ where we walked to soldiers leap. This is a rock in the middle of the river Garry where a government soldier made a huge leap to safety on the opposite shore pursued by Jacobite forces in the aftermath of the battle. 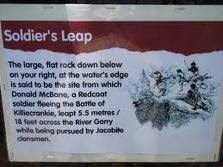 Another sign told us that Queen Victoria visited the place once and proclaimed the jump ‘impossible’ – I’m not sure how she came to this conclusion as I am guessing she was never chased by a bunch of claymore wielding highlanders. 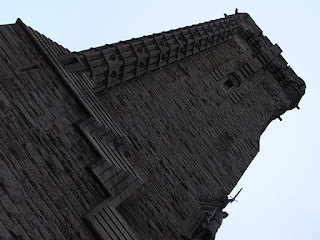 It’s a bloody long way up.

We also went to see the Wallace monument near Stirling which to be honest I’d never heard of before but turned out to be a wacky gothic tower erected in the 19th century to honour William Wallace. It’s a long way to the top (and I didn’t make it all the way) but one of the chambers contains Wallace’s actual sword, which was impressive – he must have been a big bloke. As you may detect there was a bit of a theme running through the weekend namely the Scots thrashing the English, next time I hope to make it up to Culloden for a bit of balance.
Posted by Stryker at 17:27 11 comments:
Labels: French, Waffle

These two-piece Hinton Hunt French Chasseurs (FN319) were among the first figures I painted when I started this project. Looking back over my old posts I realised that they had never had a decent showing so I thought I’d rectify that now. 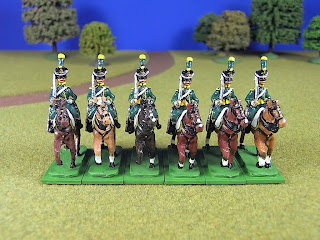 They really are lovely little castings that are amongst the best in the Hinton Hunt range in my humble opinion. 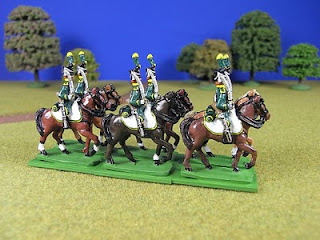 Chasseurs of the Line are perhaps a bit under represented on the wargame table being less glamorous than their friends in the Hussars and lancers. However, I hope you will agree that these lads are looking pretty smart. I have a couple of squadrons of the one-piece version to add to their ranks – eventually.
Posted by Stryker at 20:12 6 comments:
Labels: French, Light Cavalry

I managed to get them varnished and based up during the week and ready for a parade today. So here they are:

The figures are vintage Hinton Hunt castings and all but one (no prizes for guessing which one) were painted by Matt Golding.

The full battalion on parade 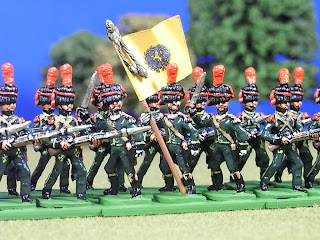 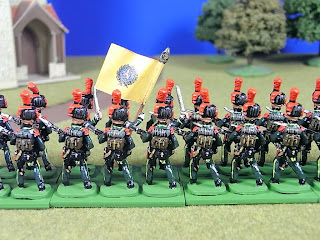 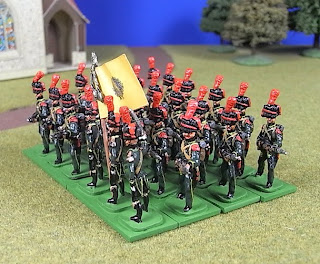 Inclining to the left (really I should have stuck them on the diagonal but that’s a bit fiddly). It’s bugging me slightly but I won’t re-base them, er, not today anyway...

I’m very pleased with them and they are a useful addition to my Hinton Hunt army especially as they can be used to fight either with or against the French. I suppose that given recent developments in the entente cordiale it would probably be best if I choose the latter option, as my British forces may no longer be available to fulfil that role.