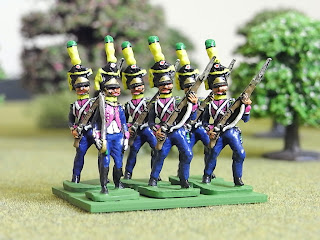 Well unbelievably it appears to be almost an entire month since my last post. My apologies to those of you requiring a more regular Hinton Hunt fix.

I haven’t painted any Hintons at all in these last few weeks as I’ve been painting stuff for another project but that’s nearly finished now, so I’ll be returning to the Poles shortly. In the meantime here’s a shot of the completed Voltigeur company of the 8th Regiment. The figures are:

Only one of the figures pictured here is a genuine vintage casting but you’d be hard pressed to tell him apart from his colleagues and I’ve already lost track of which one it is.
Posted by Stryker at 16:16 5 comments:
Labels: Polish
Newer Posts Older Posts Home
Subscribe to: Posts (Atom)