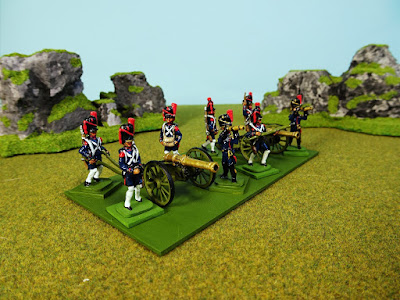 According to this blog I apparently completed my Guard Foot Artillery in 2011 (click here) but I decided after the recent battle that the expanding French army needs a bit more clout in the ‘Emperors Daughters’ department. This was brought home by the fact that the Austrian Artillery had to be drafted in to the French line of battle to bring it up to the six batteries required.

My intention is to take the French Artillery to a total of eight batteries which is the top limit per side on my maximum 8’x4’ playing area. This will be made up of four line foot batteries, two Guard foot batteries and two Guard Horse Batteries. Unusually, all the artillerymen will be vintage Hinton Hunt ones although the guns are a mishmash of Hinton Hunt, Hinchliffe, Newline and RSM.

I applied three layers of gloss varnish to the new figures as a bit of an experiment. This meant I had to re-varnish the original four gunners as these had been completed with my old satin varnish. I’m still not totally sure about a high gloss finish for my figures as I find it does make seeing some of the detail harder although in the long run this may be an advantage.
Posted by Stryker at 20:09 12 comments:
Labels: Artillery, French, Guard

Battle of the four Generals (conclusion)


My thanks to my fellow players Tony, Goya and WM for a great game and to Mrs S for lunch.
Posted by Stryker at 11:29 18 comments:
Labels: Battle of the Four Generals, Playing Soldiers

Battle of the four Generals (part 3)

Battle of the four Generals (part 2)

I had set the troops out on the table before the three visiting generals arrived trying to put roughly equal forces in each half of the battlefield. As guest of honour WM got to choose his command first and plumped for the French left comprising both the Austrians and the Imperial Guard. Tony took the French right and Goya the allied right which meant I commanded the Prussians on the allied left. This is how the battle progressed:

Battle of the four Generals

On Saturday I hosted a game of Muskets & Marshals for attendees Foy, Goya and guest of honour Wellington Man. WM brought his Prussian expeditionary force all the way from New Zealand bringing the total number of Hinton Hunt’s (and DK’s) on the table to just over 1,000.

The scenario was simple enough – two fairly equally balanced forces with a Franco-Austrian army taking on an Anglo-Prussian-Russo-Swedish one (fans of historical scenarios please look away now). There were three objectives in the middle of the table and the idea was for each side to try to gain possession of them. No hanging about in this game it was attack or lose.

I thoroughly enjoyed the game and it was great to get every single figure in my collection on the table. It was also a huge bonus to have WM present and to see some of his splendid figures for real and get to command them in action.

I took quite a few photos so I’m spitting this into several posts, this first one shows the initial dispositions – enjoy!