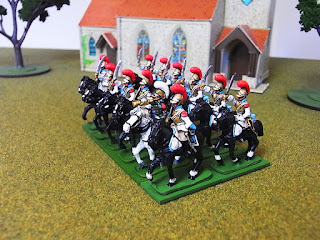 Carabiniers
Mustered in: July 2015 (as a full strength unit)
Composition: FN106 x 9, FN311 x 3 (all vintage figures)
Painted by: me
Battle Honours:
Vintage Waterloo (December 2015) – Posted on the French left flank beyond Hougoumont. It’s not clear from the historical record exactly what happened to them but it is known that they routed and quit the field (allied victory)
Vintage Leipzig (October 2016) – Assigned to Augereau’s corps and took part in the fighting between Connewitz and Markkleeberg. Although being in the thick of things opposing the Russian advance they survived the battle without any casualties (French victory)
Battle for the Road (August 2017) – Deployed from reserve to the extreme left flank of Napoleon’s line. Charged and routed the British light cavalry before being routed in turn by British hussars (French victory)
Battle of Windmill Hill (November 2020) - Posted on the right flank and routed by the Prussian Dragoons (French victory).
Invasion Britain (2021) - Only saw action at the Battle of Andover where they suffered the indignity of being routed by long range artillery fire (allied victory).
Grenadier a Cheval
Mustered in: July 2021 (previously brigaded as a half unit with the Empress' Dragoons)
Composition: FN300 x 6 (vintage figures), DK 46/1 x 6
Painted by: me 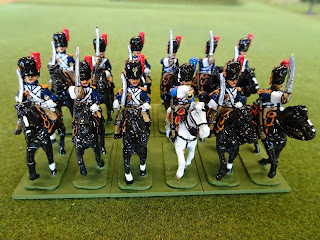 Battle Honours:
Vintage Waterloo (December 2015) - Brigaded with the Polish Lancers they took part in the 'Rocket Death Ride' near Hougoumont where they rode down the British Rocketeers (allied victory).
Vintage Leipzig (October 2016) - History does not record their role in this battle but they were certainly there (allied victory)
Battle of Windmill Hill (November 2020) - Advanced on the extreme left and routed the Silesian Hussars before turning to roll up the allied flank (French victory).
Invasion Britain (2021) - Crossed swords with the Scots Greys at the Battle of Southampton managing to rout them before being routed themselves by the Royal Dragoons (allied victory).