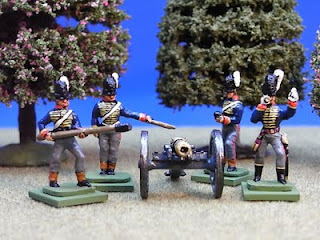 Captain Mercer’s battery of Royal Horse Artillery was probably the third most popular Napoleonic wargame unit in the old days (i.e. 1970’s) coming just behind the Imperial Guard Grenadiers and Scots Grey’s in ranking. It’s only fitting therefore that my little group of Hinton Hunt RHA gunners will represent the gallant Mercer’s men in my army.

These figures are all vintage castings that I have stripped and repainted. In my opinion the artillery crews sculpted by Marcus Hinton are among his better creations and I think that these lads have bags of character. In the end I settled for ochre for the froggings (Foundry 4C) for all ranks having taken Matt’s advice not to use gold for the officer. The bright yellow I used originally (see last post) just didn’t look right but I’m pretty happy with the final result. The gun is a contemporary Newline Designs model. The figures are as follows: 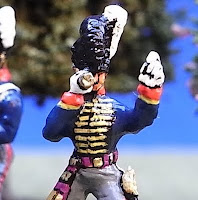 I just have a couple of limber horses to complete now and the British heavy cavalry contingent will be finished. Once I’ve done this a full parade will be ordered for General Ponsonby’s inspection - it’s possible that the Duke himself may attend although rumour has it he’s not a great fan of the cavalry.
Posted by Stryker at 15:59 4 comments:
Labels: Artillery, British 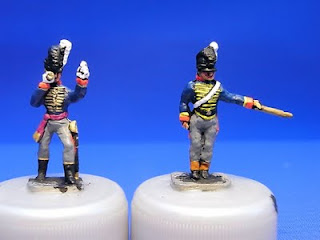 I’m having a bit of a problem painting the lace on these Royal Horse Artillery gunners. Apart from the fact that in true Hinton Hunt style the detail is not easy to follow with the brush I just can’t decide what colour the braiding is supposed to be.

According to the pictures in my Blandford Uniforms of Waterloo it appears to be almost a gold colour for all ranks and I have tried this on the Officer on the left. However in my copy of Military Dress of the Peninsular War it says it should be yellow for the rank and file so that’s what I’ve done to the gunner on the right. I don’t think that either really looks right and every picture I find seems to show a different shade of yellow/gold.

So what colour should they be? Answers on a postcard please (or perhaps just leave me a comment).
Posted by Stryker at 19:49 4 comments:
Labels: Artillery, British

Got the blues again 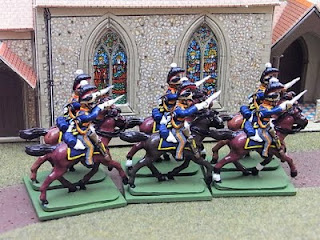 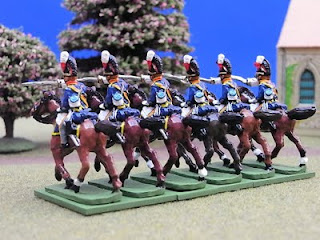 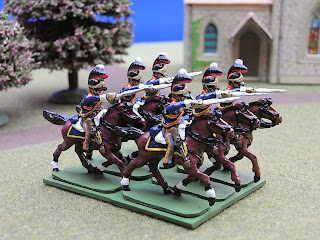 Since I started hoarding vintage Aint’ got no piles of cash All I got is BN60 With a hefty chunk of flash Got those Hinton Hunt blues baby It’s Vintage Hinton all the way I’ve tried to kick the habit But then I’m right back on eBay Repeat and fade out...
Posted by Stryker at 14:19 7 comments:
Labels: British, Heavy Cavalry
Newer Posts Older Posts Home
Subscribe to: Posts (Atom)