The Duke of Wellington and Lord Hill have been out inspecting the Allied gun line. 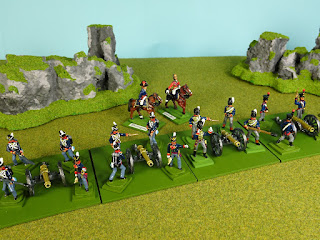 The two new Royal Field Artillery batteries are made up of: 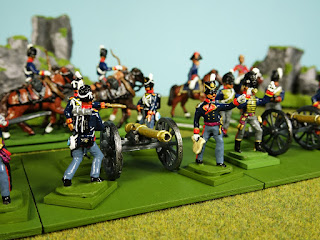 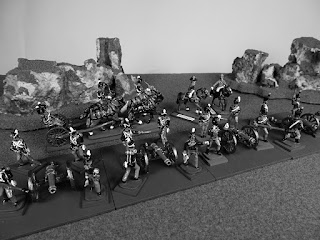 This is now a substantial weight of artillery to deter any attack by the French.
Posted by Stryker at 16:28 20 comments:
Labels: Artillery, British 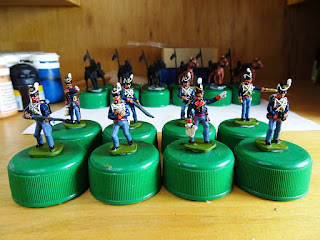 I’ve finished painting the current batch of eight British Foot Artillery gunners and have just applied the first coat of gloss varnish. I have to say I’m pleased with the result and I hope to have them based up and ready to take their place on the Duke’s firing line by the weekend.

Nigel made a comment recently querying whether the two figures carrying a cannonball were genuine Hinton Hunt or a variation. I was confused on this point myself at first because it seemed odd that Marcus would produce two such figures. However, the mystery is solved as one of them (second from left in the photo) is the ammunition carrier BN.145.

All the other ammunition carrier figures made by Hinton Hunt have a canvas bag on a strap that goes around their shoulders and I was expecting the British one to be the same. The identification is confirmed via the code on the figure base and by referring to the Hinton Hunter.
Posted by Stryker at 19:50 10 comments:
Labels: Artillery, British

Gunners for the Duke 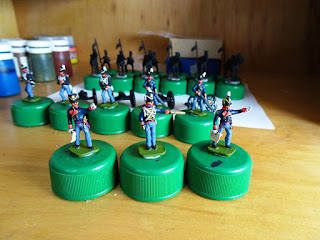 In the ten years or so since I started this project I have come across very few British Foot Artillery figures. I assume this is because their comrades in the Horse Artillery have always been more popular with wargamers and therefore proportionally fewer foot castings were made. However, I have finally assembled enough vintage figures to produce three artillery batteries and the first batch are on the painting desk now.

I’m a bit annoyed with myself though as I broke my golden rule of always painting a test figure before going into mass production. I think this was a bit of laziness on my part but I’m regretting it now as I’ve had to repaint several things across all the figures. I used the Hinton Hunt painting instructions for the officer (thanks to Clive) but without the same for the gunners I found it surprisingly hard to get uniform details. My reference books and the web are inconsistent and nobody shows a gunner with full equipment, the way Marcus Hinton modelled them.

Painting Hinton Hunt figures is tricky, and it takes a bit of trial and error to decide what detail to include, leave out or invent. Sometimes less is more and the test figure is worth doing to make sure the finished result looks right to me. In the end I had to abandon the batch painting and complete one figure to sort it all out, serves me right.
Posted by Stryker at 20:01 23 comments:
Labels: Artillery, British

The subject of the rather disappointing Hinton Hunt cannon models has come up before on this blog. The real problem with them is that the wheels are too small making the models look out of scale with the figures. The actual cannon models themselves are quite nicely proportioned but the tiny pram wheels make the overall effect unappealing.

Original Hinton Hunt models are however quite rare so when I do come across the odd one I like to include it in my forces. I have two French guns (click here) and two Austrian ones (click here) but the remainder of my guns are mostly contemporary ones by Newline Designs, which I think fit in quite well.

During my trawl of eBay over the summer I turned up one British gun A.2. Field Gun (British) which I determined to add to the Dukes arsenal. However, it just looked too puny beside my existing Newline gun, so I took the radical decision to swop the wheels with Newline ones. I’m pleased with the result even though it seems a bit sacrilegious.
Posted by Stryker at 19:19 14 comments:
Labels: Artillery, British

Following my recent splash on eBay it was Goya who helpfully pointed out to me that my Guard Horse Artillery figures were probably worth their weight in silver. I think he was exaggerating but I thought I should paint them rather than leave them too long in the lead pile to get full value for money. 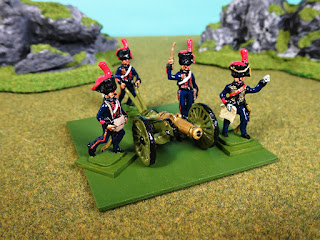 The figures (all vintage ones) are: 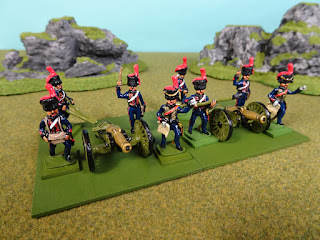 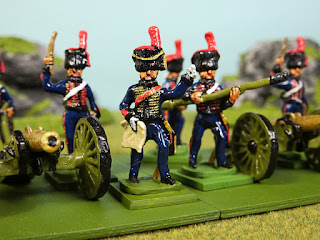 When I pulled out my other gun crew (painted ten years ago) I realised that I’d made a few mistakes with the uniform. This meant I had to do a little bit of updating so that both crews matched, and I also re-varnished them in gloss to conform to the new house style.

Footnote: FN/85 Gunner, with ammunition bag does not appear in my old Hinton Hunt catalogue (circa 1974). My suspicion is that the listing was left off in error as it should be at the bottom of page 2, the figure is certainly a vintage one.
Posted by Stryker at 20:06 20 comments:
Labels: Artillery, French, Guard
Newer Posts Older Posts Home
Subscribe to: Posts (Atom)