Having cleared away the figures and scenery from the latest ACW battle I found myself with an empty table and a little bit of time to try out a quick solo playtest of my Napoleonic rules Muskets & Marshals. I wanted in particular to see how my re-vamped melee rules worked so I tried a simple cavalry versus infantry scenario. 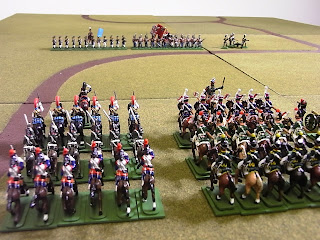 French cavalry about to begin their charge against an Allied line.

The French cavalry units both declared charges against the opposing infantry who had orders to stand; this enabled me to see how the form square rule worked: 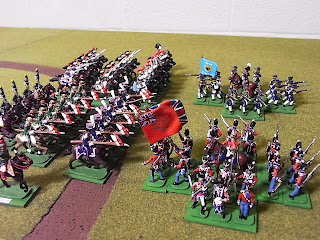 The allied infantry form square in the nick of time!

Both infantry units successfully formed square and passed their morale tests for units charged. The cavalry were moved up to 2” away from the squares, the point at which they would receive musket fire. The RHA battery was not close enough to fire canister as the horsemen approached and so the resulting casualties were not excessive and both cavalry units passed their subsequent morale tests. 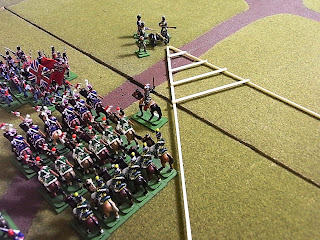 The RHA battery can elect to fire at the charging cavalry at any point during their move. However, they are just out of canister range and cause minimal casualties. 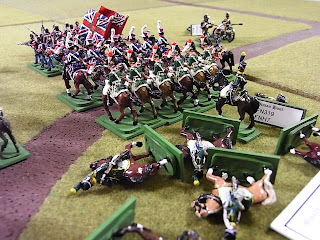 Not quite so minimal now - the results of volley fire from the square and the first round of melee!

The cavalry were now moved adjacent to the squares so that the melees could be fought. The lancers were unable to make a dent in the British square and as melee losers now had to test morale on a -2 becoming disordered. 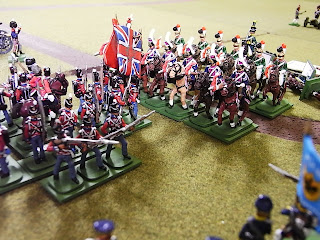 The British square stands firm against Polish lancers of the Guard.

The French heavy cavalry had better luck because they were rated A and were up against a C rated Prussian Landwehr battalion. There was still a reasonable chance that the square would win the melee but the French had some good die rolls and the Prussians lost. The resulting morale test gave the Prussians a mandatory retreat but as a retreat move for a square seemed unlikely I decided to make a new rule:

A square that loses a melee against cavalry immediately breaks and routs. 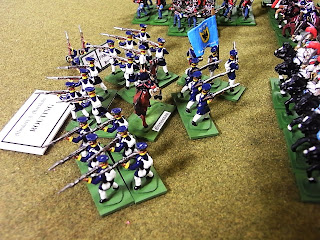 The Prussian Landwehr fall victim to my new rule and rout!

I now moved on to turn two – the French heavy cavalry decided to pursue the broken Landwehr while the Lancers fought another round of melee. This time though, as they were disordered, they stood virtually no chance of breaking the square, they lost the melee and then routed. 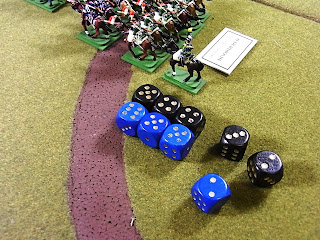 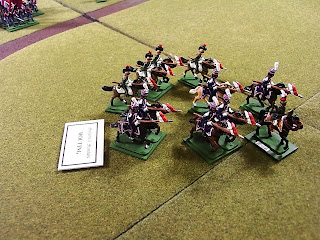 Well, it wasn't them!

All in all I was pretty pleased with how the rules worked – the lancers up against British regulars in square were never likely to fair well whilst the heavy cavalry against poor quality Landwehr should have a chance of succeeding, and in this case they did! 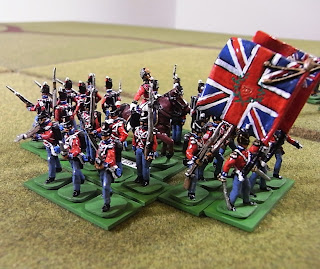 Daddy Hill offers three cheers for the King from the safety of the British square.

As a result of this little playtest I’ve made a few changes to the rules and also included a special rule for Cossacks (This is because Roy keeps threatening to bring his Hinton Hunt Russian army over to do battle with my French!). To view or download the revised version of the rules click here.
Posted by Stryker at 20:25 6 comments:
Labels: On Manoeuvres

I blame Matt entirely for this post because ever since he said my Voltigeurs look like they're playing air guitar I've been unable to see them any other way. No longer are they proud soldiers of France, instead they have turned into members of a rock band wearing Sergeant Pepper style dodgy uniforms. Let's hope they will still be able to help the Emperor maintain the Status Quo (boom-boom!).

Changing the subject, a very rare thing happened to me this week - I actually won a wargame! If you haven't seen it already (and don't believe me)
take a look at my ACW battle report over on Brother against Brother.
Posted by Stryker at 11:12 6 comments:
Labels: French, Waffle

You’ve probably been wondering what progress I’ve been making with the 9th legere. Well, the answer is not a lot. Looking back I see my last post on them was 16th February and since that time I have hardly picked up a paint brush at all. 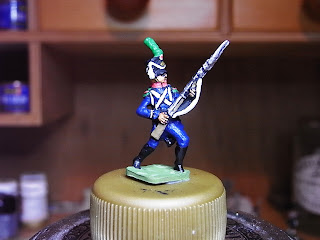 FN/254 French Voltigeur in plumed shako (charging) - painted this time as a chasseur.

What hobby time I have had over the last month has largely been taken up with playing the ACW campaign but I did manage to sneak in a couple of short Hinton Hunt painting sessions a week or so back. This now puts me in sight of the finishing line in terms of completing this unit, with the last batch of chasseurs half painted and only the command group still waiting untouched. 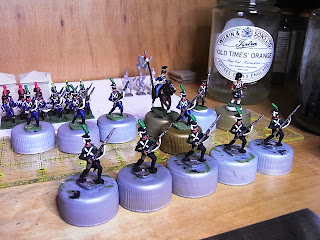 Half completed chasseurs to the front, completed carabineers and voltigeurs behind them and the unpainted command group hiding away in the rear.

One of the things that makes wargaming such a great hobby is the many different facets to it - painting, modelling, researching, planning, collecting, rule writing, blogging and of course playing games. Most of my time generally seems to be spent painting but it’s also nice to get to play a game once in a while.
Posted by Stryker at 19:03 11 comments:
Labels: French 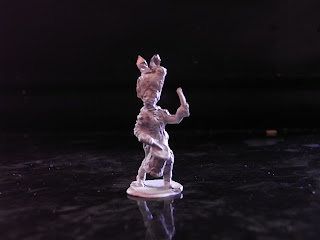 I just managed to pick up this extremely rare Hinton Hunt Figure on eBay. He is listed on Additions Sheet XI as FN25a Old Guard Easter Bunny Drummer (charging).

There are others up for sale right now including FN16a French Voltigeur with Easter basket in 1807/12 plumed shako and BN34a Highlander carrying fluffy chicks and waving musket (charging).