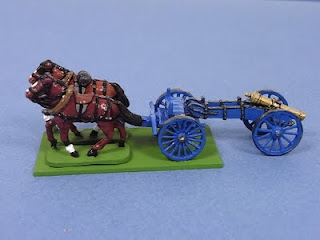 Various distractions including a couple of trips away and an on-going re-basing saga involving my 15mm Napoleonic armies has meant that Hinton Hunt painting progress has been rather limited for the last few weeks. I have however found time to complete my Prussian artillery battery with this limber.

The horses are vintage castings of H/1 and H/2 that I stripped using my usual method and repainted. The limber is a Clayton produced Hinton Hunt AL4 model and the gun is a contemporary piece produced by Newline Designs.

I never expected to have limbers for my artillery but I now have quite a few thanks largely to Don in the US. I decided to go for just two horses in ‘Fire & Fury’ style as I think that four-horse teams take up too much room on the table (also I have an aversion to painting horses). The Hinton Hunt range does include both limber riders and limber-horse riders for the Prussian forces but sadly I have neither of these in my collection hence the run away effect.
Posted by Stryker at 08:51 6 comments:
Labels: Artillery, Prussian 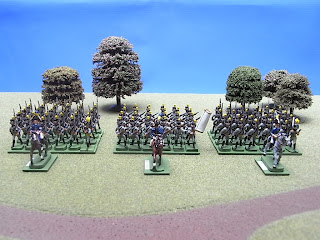 Having only recently arrived in the display cabinet, Marshal Bernadotte thought it would be a good idea to hold a full parade of the Swedish Division to introduce himself as their new C-in-C. He was pretty pleased with the turnout – from left to right are Regiments Abo, Kajana and Alderkreutz. 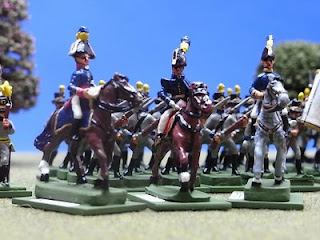 Here we can see the Swedish commanders conferring during the manoeuvres. General Klingspor is on the left and General Alderkreutz the right, Marshal Bernadotte is the chap in the middle.

The day was tinged with sadness however with the news that some of their compatriots will be leaving them shortly due to a couple of eBay sales completing tonight. During a recent inventory check I decided that I just have way too many of them and with vintage Hinton Hunt and Clayton figures pushing their way to the front of the painting queue, I took the decision to prune them. I will still have enough figures left to make up another three Regiments however so Bernadotte can rest assured that he will continue to hold an important command in my armies.
Posted by Stryker at 17:58 3 comments:
Labels: On Manoeuvres, Swedes 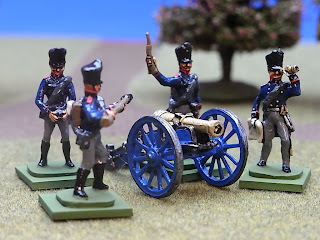 I’ve just finished this Prussian artillery battery. The gunner with the cannon ball is a vintage casting that I stripped to repaint whilst all the other figures are Clayton ones that had not been painted before. These particular Clayton castings are superb and almost completely indistinguishable from original figures. The only telltale sign is the single rectangular casting-plug that was under the base of the figures – vintage castings have two separate plug marks. My favourite figure from this batch has to be the Officer with his map and telescope. Perhaps he is checking out the target to make sure he is not engaged in a blue on blue strike as at Waterloo where Prussian “friendly fire” decimated Mercer’s RHA battery.

The gun is a Newline Designs model and the crew are as follows:

I’ve enjoyed painting this little group as I tend to flag a bit when painting larger units. This one is another “nostalgia” unit as I had a couple of Prussian gun batteries in my old Hinton Hunt army. Back then I had the HH painting instructions for the gunners but nothing for the guns so I just painted them brown. I assumed they’d be natural wood so it’s been good to put that little error right although my guess is that on campaign they probably did end up a mixture of bare wood and mud.
Posted by Stryker at 18:43 3 comments:
Labels: Artillery, Prussian 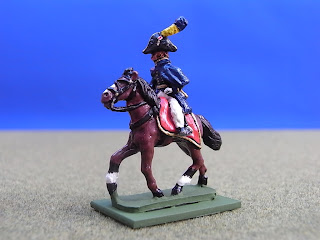 This is Marshal Bernadotte aka Charles XIV of Sweden aka Carl III Johan of Norway aka turncoat. So just how did a French Marshal rise to become a top Swede? Well, I’m not entirely sure but he was brother-in-law to Joseph Bonaparte which may have helped. Later he turned his back on his old master when Swedish forces took part in the Leipzig campaign fighting along side the Allies.

Those of you who know about these things (and you know who you are) will be aware that Hinton Hunt never produced a personality figure for Bernadotte. This figure is actually a clever conversion given to me last year by Roy. The horse is APH/1 Ancient Persian Chariot Horse with a blanket added (how did you do that Roy?). The rider is PN60 Marshal Blucher with a different head attached.

I decided to paint the figure as Bernadotte to give me someone to command my Swedish contingent. The uniform is pure speculation although having just found a picture of him on Wikipedia I see I’m not that far off.
Posted by Stryker at 19:08 3 comments:
Labels: General Staff, Swedes
Newer Posts Older Posts Home
Subscribe to: Posts (Atom)