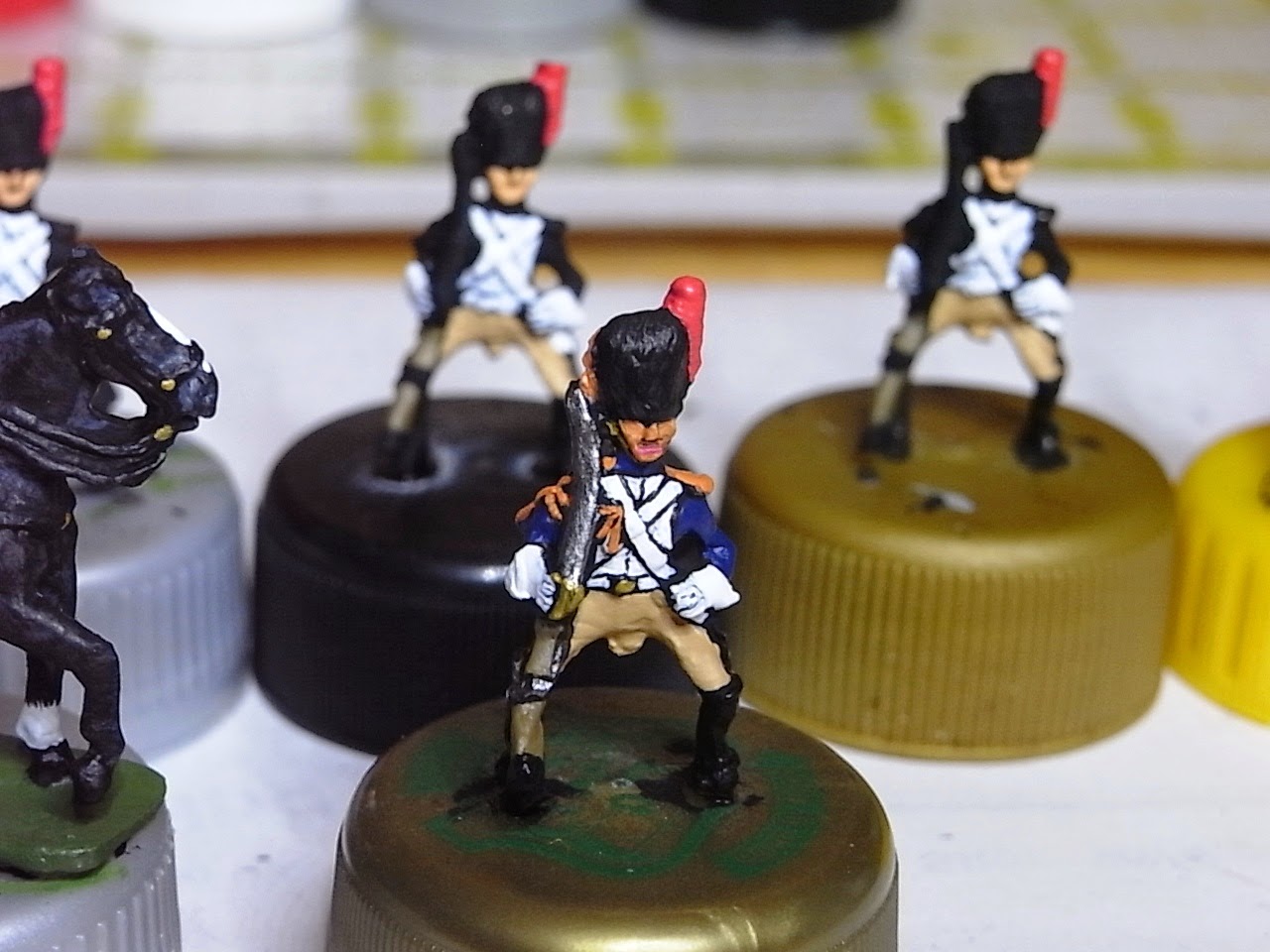 I finally sorted out the way I want to paint the Horse Grenadiers after studying several pictures on the internet to work out how best to do the lace. I resorted to this because even with the original Hinton Hunt painting instructions I found it very hard to make out what had been sculpted on the figure. I’m happy with it now even if it wasn’t exactly what Marcus Hinton intended when he created them.

Vintage Waterloo continues to take a fair bit of my time but at least all the figures are now with (or on their way to) their painters. It’s been great to involve others who appreciate these figures in the painting process and without them Roy and I would have little chance of putting on anything other than a skirmish game.

I’ve been thinking about ways to adapt and streamline my rules Muskets & Marshals for use in the game. Roy and I have never tried anything bigger than ten or so units per side and Vintage Waterloo is likely to have quite a few more than that. We also need to get a result within eight turns and of course it wouldn’t be Waterloo without a decent massed cavalry charge or two, an attack by the Old Guard and the arrival of the Prussians – quite a lot to fit into the time.
Posted by Stryker at 12:56 19 comments:
Labels: French, Guard, Heavy Cavalry, Vintage Waterloo

There hasn’t been a lot of painting going on here recently because I have turned my attention to feverishly stripping, filing and repairing figures. This is because, not to be outdone by Roy, I too have called for help to paint up extra forces ready for Vintage Waterloo. 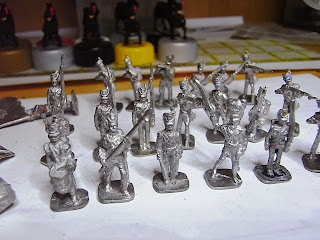 All stripped and nearly ready to go off to Lee, not sure which regiment yet but I quite fancied yellow facings.

Lee has agreed to paint a unit of British line infantry for me, this will be another mixed figure unit similar to the Guards unit I already have. All the figures in this one will be vintage ones and will include the fifer from Steve and the Guards officer from Jack – I’ll have to come up with some sort of backstory for this, perhaps he returned late from the Duchess of Richmond’s ball and couldn’t find his own regiment? 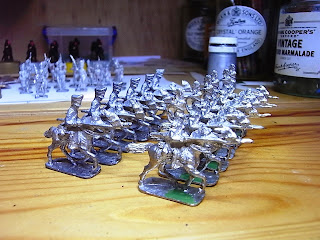 Roy and I decided that we would go for 12 figure cavalry units for 'Vintage Waterloo' but I may need to tweak my rules a bit to allow for this.

Matt in NZ will be painting two squadrons of Prussian Lancers – six lovely vintage HH Ulans and six Der Kreigspieler Landwehr. All of these figures originally came for Don in the US so by the time they get back to me again they will probably be the most travelled toy soldiers in the world! 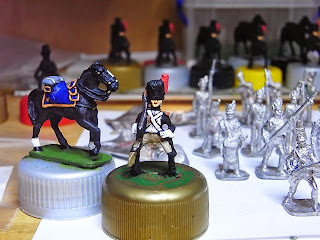 My only bit of painting for the last two weeks. These lads will be combined with a squadron of Roy's Empress Dragoons to make a Guard heavy cavalry unit.

But I haven’t given up painting entirely as I have been working away on my test figure of FN/300 Horse Grenadier Guard (on horse FNH/2). As usual this Hinton Hunt mounted figure is a bit tricky to animate with the famous disappearing detail on his lace – still a bit more work to do.

Oh, and did I mentioned that Matt UK has come out of retirement and will be turning out Mr Sharpe and the 95th Rifles together with some British Light Dragoons, plus a surprise item…
Posted by Stryker at 16:00 7 comments:
Labels: Der Kreigspieler, Vintage Waterloo

Finally finished off and based up – the 42nd Black Watch on parade. They’re going to need to brush up on their drill (particularly forming square) if the rumours are true that the ‘monster’ has escaped from Elba! 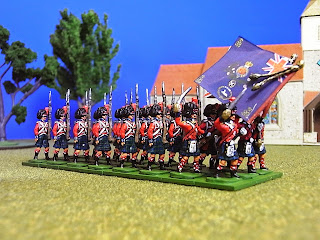 Scotlands finest in column of march. 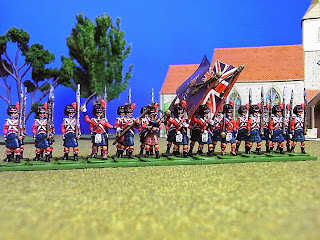 The regiment deployed in battle-line.

All the figures I used for this unit were vintage Hinton Hunt castings with the exception of the two colour bearers who were converted from DK figures. The unit is made up of: 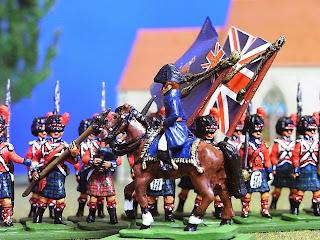 "Jock, is there anything worn beneath your kilt?"
"Nae sir, it's all in perfect workin' order!" 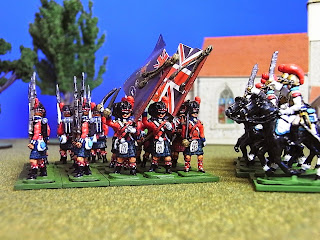 A taste of things to come? The regiment forms square to defend against French cavalry.

The preparations for Vintage Waterloo are continuing at quite a pace – Roy seems to have every skilled brush-smith in the land (actually the world) beavering away painting up his troops. If you haven’t already seen them take a look here at Matt’s blog and here at Lee’s blog.

So the pressure is on – next up for me will be a squadron of Grenadiers-a-cheval of the Guard who will be brigaded with my Polish Guard lancers for the game.
Posted by Stryker at 16:34 22 comments:
Labels: British, Scots, Vintage Waterloo
Newer Posts Older Posts Home
Subscribe to: Posts (Atom)