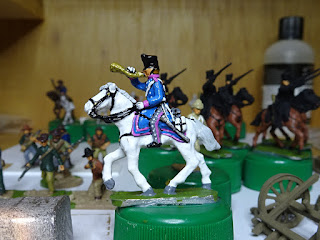 Just to prove its not only Boers I’ve been painting over the last couple of weeks here is the completed trumpeter conversion for my 6th Naumarkisches Dragoons. He looks a bit more glossy than usual as the varnish was still wet when I snapped this photo.

I made no attempt to find the correct uniform details for this figure and painted him in exactly the same way as the troopers. I have a suspicion that particularly in the late Prussian army special uniforms for musicians may have been a luxury hard to come by – that’s my excuse anyway.

I have another five troopers to paint to complete the unit which I want to do in time for Vintage Leipzig. This will mean that the Boers (who you can see sneaking into the photo) will have to go on hold for a week or two.
Posted by Stryker at 12:00 10 comments:
Labels: Heavy Cavalry, Prussian, Vintage Leipzig

George Edward Spencer was a clerk working for the Great Eastern Railway when on 3rd September 1914 he and a couple of his mates from the office answered Kitchener’s call for volunteers and joined the 2/3rd Battalion of the London Regiment (Territorial Force). George was nineteen years old but his Medical Inspection Report stated his apparent age as “21 years and 2 months”, height 5’ 8.5”, girth when fully expanded 39 inches, vision “good”. 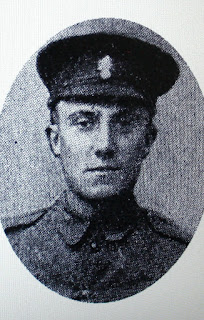 The 2/3rd Battalion embarked from Southampton in December 1914 to sail to Malta where George disembarked on 1st January 1915. He remained in Malta until April 1915 when he sailed for Port Sudan on the Red Sea. The battalion later moved to Port Said at the mouth of the Suez Canal and from there on 18th October to Cape Helles on the Gallipoli peninsula. George was in hospital in Egypt at this time and rejoined his unit at Mudros on the Greek island of Lemos on 13th December. Mudros was the base of operations for the campaign in Gallipoli but it is unclear if he ever set foot on the peninsula himself as the evacuation of troops was already in motion. On 18th January 1916 George was promoted to Lance Corporal.


With the close of the Gallipoli campaign in early 1916 many of the British units were sent to France and George arrived there on 17th April. The Territorial force was undergoing reorganisation at this time in preparation for the forthcoming Somme offensive and in May 1916 the 2/3rd battalion was disbanded. George was transferred to the 1/3rd battalion London Regiment on 23rd May 1916. The battalion formed part of 167th Brigade, 56th (1st London) Division.

Against the advice of his own Generals, Sir Douglas Haig ordered the 56th Division along with 46th Division to attack the Gommecourt salient on the first day of the battle of the Somme, 1st July 1916. The action was a diversion to draw enemy reserves away from the main attack further along the line. Haig and his staff appeared not to realise that Gommecourt was probably the most heavily defended point on the entire Western Front.


The 1/3rd battalion did not take part in the direct assault on Gommecourt but were tasked with constructing a communication trench from the British front line across no-man’s land to the German front-line trench. This trench would be necessary in order to bring up reserves and supplies safely once Gommecourt had been captured. However, the advance stalled although the 1/3rd were still ordered to commence digging at 8.00am. By 10.10am the attempt was abandoned after receiving heavy casualties from enemy shellfire.


There is no direct documentary evidence in his records that George was involved in the action but it seems highly likely as all leave was normally cancelled in advance of a “big push”. If he did take part one can only imagine his experience of trying to dig a trench across a battlefield under shellfire whilst approximately one fifth of his comrades were killed or injured around him.

On 9th September 1916 George was transferred from the 1/3rd London’s to the 1/23rd London’s joining them at Lahoussoye. By 14th September they had moved forward to High Wood in preparation for their participation in the advance towards Flers-Courcelette due to start the next day. A subsidiary attack of the Somme offensive the Battle of Flers-Courcelette was notable for the introduction of tanks. The attack was launched across a 12 km front from Rawlinson’s Fourth Army salient on 15th September. 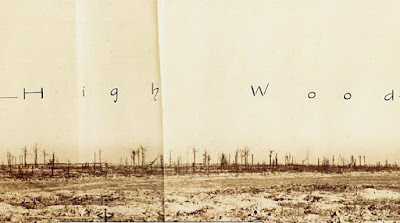 The 1/23rd Londons were part of 142nd London Brigade, 47th London Divison. They appear to have taken no part in the opening day of the battle on 15th September but the war diary entry for 16th September shows that they were heavily engaged that day. At 8.55am the battalion moved out over a crest to their front and as they passed to the east of High Wood they were subjected to a heavy artillery barrage, possibly from their own guns. Further on they encountered very heavy machine gun fire from the area of a sunken road. At 2.00am on 17th September the battalion handed over its position to the 6th London’s. The War Diary states that during the period from 16/09/16 to 19/09/16 the 1/23rd London’s lost 16 Officers and 565 other ranks.


At some point during 16th September 1916 George Spencer was killed in action, he was just 21 years old. He has no known grave. His name appears on the Thiepval Memorial in France on Pier and Face 9D 9C 13C & 12C and also on the Great Eastern Railway war memorial in Liverpool Street Station, London.

On 20th November 1916 an entry was made on his service record simply noting him as “missing”. On 7th August 1917 his record was again noted this time with “Regarded for official purposes as DIED on or since 16.9.16”. His length of service is recorded as “2 years and 14 days”. 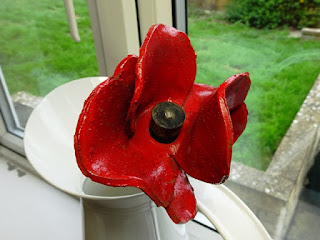 George Edward Spencer was my great uncle. I only found out about his existence relatively recently as he was never spoken of within the family. The information here has been pieced together from records held at the PRO and other sources on the internet.
Posted by Stryker at 07:48 10 comments:
Labels: Off Topic

Or Jaegers if you prefer, however I like to use the spelling in the Hinton Hunt catalogue which also menacingly describes these figures as ‘Jackbooted Riflemen’.

In my original Prussian army I had 20 Jagers in the advancing pose but my new unit has representatives of every figure type comprised as follows: 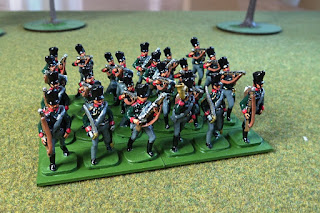 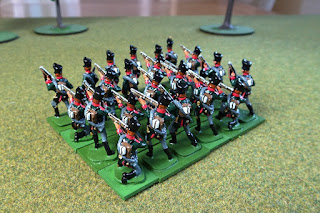 The Prussian Jagers were considered a crack formation and although they normally fought parcelled out in small detachments my own force will now have the option to fight as a single battalion in the forthcoming Vintage Leipzig game.
Posted by Stryker at 17:05 8 comments:
Labels: Prussian, Skirmishers, Vintage Leipzig 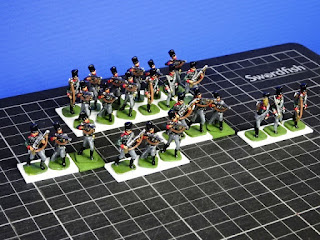 Well Mrs S and her knit club chums have gone to London for the day and here I am home alone with the dogs. So what can I do? The garden? No it’s just started tipping down so what could be a more suitable activity than rebasing? Yep, time to get those Prussian Jagers onto their new bases and crank up Neil Young on the ipod player.

I was a bit nervous about removing the original individually based figures from their plasticard mounts as I’ve never tried to rebase any of my Hinton Hunts before. The figures were attached with Superglue and I was concerned that they might not come away too easily. I shouldn’t have worried though as by slightly flexing the plasticard I found that the figures would pop off very easily and there were no casualties whatsoever.

So here they are based to the new system, each group of six figures are mounted on 1 x 3 figure, 1 x 2 figure and a single figure base. As I said before this means they can now be fielded as a close order unit for Vintage Leipzig whilst retaining the ability to be deployed as skirmishers in groups of six for smaller games. What do you think – ‘A’ or ‘A+’ class?
Posted by Stryker at 11:24 14 comments:
Labels: Prussian, Skirmishers, Vintage Leipzig
Newer Posts Older Posts Home
Subscribe to: Posts (Atom)