I feel slightly guilty that I hinted a few posts back that I would be slowing down a bit on this project because as a result The Archduke immediately offered to paint a unit for me. Now as you know I have units in my collection painted by various talented Hinton Hunt aficionados so I wasn’t going to pass up such a chance to swell the ranks. As I’m short of French troops I thought another unit of fusiliers would be just the ticket, so here they are. 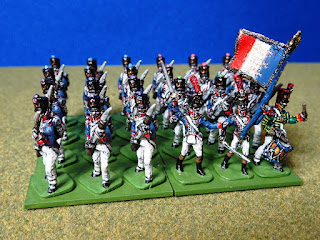 This unit will represent the grizzled veterans of the 85e Regiment d'Infanterie de Ligne who have an impressive list of battle honours (Ulm 1805, Austerlitz 1805, Eylau 1807, Friedland 1807, Essling and Wagram 1809) and also took part in the battle of Waterloo. I quite like the irony that a unit painted by the Archduke's own hand had such a significant part in thrashing the Austrians. 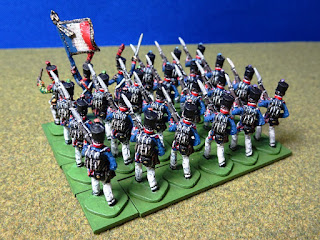 My thanks to Nigel for equipping these splendid reinforcements and for helping to reduce the lead pile by a further 24 figures.
Posted by Stryker at 09:47 13 comments:
Labels: French
Newer Posts Older Posts Home
Subscribe to: Posts (Atom)