The limits of glory 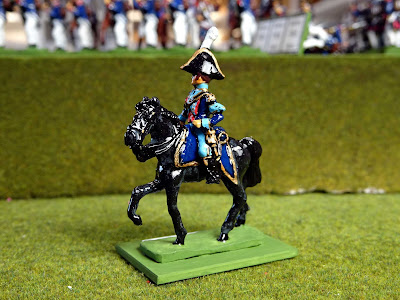 La Bédoyére was played in the film Waterloo by Philippe Forquet who interestingly was at one time engaged to Sharon Tate. His acting career never really took off although he did have a part in a US TV series called The Young Rebels set in the American Revolution. 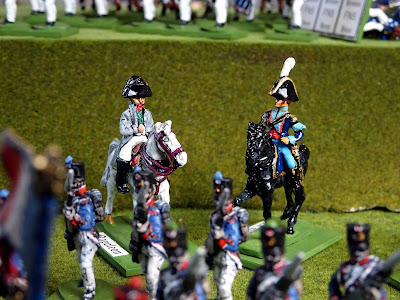 Napoleon: “When I am dead and gone what will the world say of me?”
La Bédoyére: “They’ll say that you extended the limits of glory, sire.”

La Bédoyére was to meet an unfortunate fate after Waterloo being amongst the few French officers who were caught by the allies and shot by firing squad.

On Thursday I was able to host my first in person wargame in the Hinton Hut since 2019. General Foy and none other than the Archduke himself took arms against Napoleon (me) in what turned out to be another great table-top battle.

Nigel played the Prussians and Tony the British whilst I commanded a slightly smaller force of French who were playing on the defensive.

This was a fun game with plenty of twists and turns but in the end, I was soundly beaten by my opponents. The rules were my standard Muskets & Marshals, but we introduced written turn by turn orders which worked really well.

My thanks to the visiting generals for making the long hike here and for providing excellent company for a long overdue day of playing soldiers.

Posted by Stryker at 20:24 26 comments:
Labels: Battles in the Hut, Playing Soldiers

The Horse Grenadiers are done and dusted and I’m very happy with the way they’ve turned out. The figures are:
6 x FN/300 Horse Grenadier Guard (on horse FNH/2)
6 x DK 46/1 Horse Guard Grenadier (one converted to trumpeter) 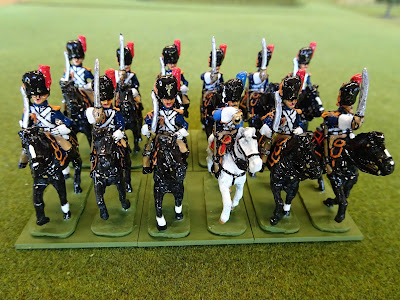 I think you’ll agree that the height surgery on the DK’s has been successful although obviously they look a little malnourished next to their Hinton Hunt friends.

Unit Histories - just a note to say that I have updated the Unit Histories pages to include the most recent battle honours. If you're bored take a look. I still have more units to add but at least those that are there are now up to date.