Drummer for the 49th Foot

Not much painting time this week but I did manage to paint the drummer for the Hertfordshire regiment. I like the finished look with the reverse colour green of his coat which will stand out nicely against the ranks of red - I’m sure the Voltigeurs will appreciate that too! 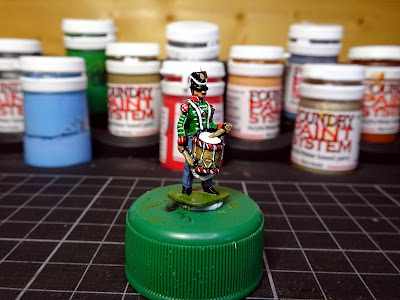 The figure is a vintage casting of BN/12 Drummer (playing).

More recruits for the 49th Foot

I managed to complete another six infantrymen for the Hertfordshires this week taking me to just over the halfway point for the unit. These haven’t been as much hard going as I expected and even painting the red hasn’t been too frustrating, even though it takes four coats to cover properly. 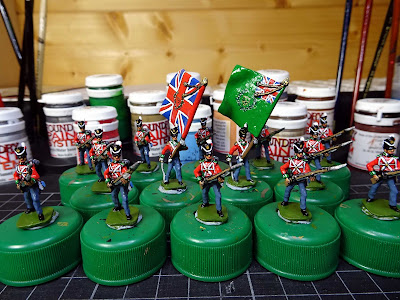 To reward myself I intend to paint the remaining command figures next including the drummer who will be in reverse colours. I also have a sergeant and a couple of officers to do.
Posted by Stryker at 19:57 13 comments:
Labels: British

Ensigns of the 49th Foot

Believe it or not, although I now have several British foot units in my collection, up until now I have never painted a Hinton Hunt King’s colour or Regimental colour. I managed to dodge this by getting Matt to paint the flags for The Guards, and Lee those of the Cambridgeshires. However, I can dodge no more and the time has finally come to man up with the Hertfordshires.

They were quite labour intensive (sorry about that Matt and Lee) especially painting over a black undercoat as I always do. I’m happy with the way they turned out although I won’t be rushing to do any more in a hurry.

I’ve also completed another 5 infantrymen bringing the total figures painted so far up to 8 so I’m a third of the way through.

Soult’s first ambition was to become a soldier and he joined the ranks of the French army as a private. Rather bizarrely he then left to pursue a career as a baker until someone managed to persuade him back to a military path. He quickly rose through the ranks and was eventually given command of IV corps in Napoleon’s Grande Armee.

At Boulogne he proved a stickler for training and sometimes had the corps out for 12-hour stints on manoeuvres. He even commissioned a bronze monument to the Grande Armee and greatly annoyed his officers by demanding that they all contribute to the cost. He was not much loved by the other marshals and generals and bickered constantly, having run-ins with Ney in particular (one time in Spain this led to a full-blown fight between the staffs of the two marshals).

During the early part of the Austerlitz campaign, he and Murat felt that the army should retreat but they didn’t want to say this directly to the emperor so somehow convinced Lannes to do the dirty work. Napoleon didn’t take the suggestion well saying, “This is the first time that Lannes has ever advised a reteat!”. Seeing how the conversation was going, Soult chipped in to say he couldn’t understand why Lannes would say such a thing. Lannes, being rather miffed, then challenged him to a duel, although nothing came of it.

Soult’s finest moment came at Austerlitz where his men stormed the Pratzen Heights to seal Napoleon’s brilliant victory, although he forever thought the battle his own personal triumph. Later in Spain his work was mostly mediocre due in part to his preoccupation with acquiring vast amounts of loot - his HQ in Andalusia was said to resemble an art gallery.

Following the abdication Soult became a Royalist and was given command in Brittany until he was sacked by the king for a misdemeanour. He re-joined Napoleon for the Hundred Days where he served as chief-of-staff giving a less than impressive performance. After Waterloo he fled to Berg after a tip-off he was on the allied ‘hit list’ for execution.

Eventually Soult managed to worm his way back in with the Bourbons becoming both Minister of War and Prime Minister and was always popular with the French public. He represented France at Queen Victoria’s coronation where Wellington snuck up behind him and laying a hand on his shoulder said, “Aha, I’ve got you after all these years!”. He died in 1851 at the age of 82, the last but one of Napoleons marshals (Marmont, the last, died the following year).

Quite by chance both Mark and I completed a unit of Old Guard Grenadiers last month and he suggested that we try and coordinate a future Paint Along as a way of keeping motivated. So, we are currently in the process of painting a British Line Infantry unit each although I fear Mark has stolen a march on me – click here.

I have painted him in accordance with the Hinton Hunt painting instruction sheet as a member of the 49th Hertfordshire Regiment. I’d wanted to have a unit with green facings, so this was a happy coincidence.

The 49th was an interesting choice made by Marcus Hinton because the Regiment served in Canada throughout almost the whole period of the Napoleonic Wars and never faced the French in either Spain or at Waterloo. However, I could use them to represent any unit with green facings so this doesn’t really matter.