I’ve had a few evenings on the trot where I have been able to spend an hour or so painting with the result that the Prussian artillery recruitment drive is progressing quite nicely. There are a total of 12 figures on the go with half of them more or less finished and this will give me 3 extra batteries. I‘ve also been working on some Prussian guns from Newline Designs. I think the Newline models work well as they sit halfway between the undersized Hinton Hunt ones and the rather nice Hinchcliffe 20mm ones. This batch as you will note includes a howitzer for variation although there is no distinction between these and regular guns in my rules. 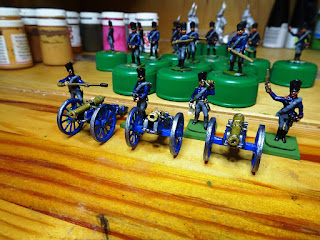 The final item on the desk at the moment is a trumpeter conversion of a British Light Dragoon BN/50 Light Dragoon (mounted) charging, wearing bell top shako and French style blue coat with coloured facings. This conversion doesn’t include any clever stuff with a soldering iron just a bit of brass rod, Super Glue and Magic Sculp. 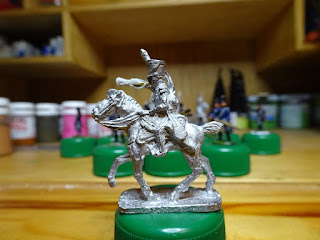 Previously my 6 figure squadron of Light Dragoons were combined with the Brunswick Hussars to form a single unit. However since the latter have recently been expanded to a full unit I need to increase the dragoons by a further 6 figures. 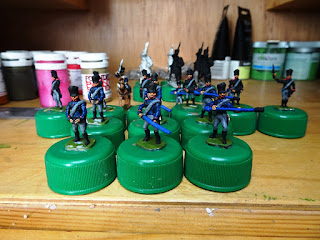 Update: Goya got in touch yesterday and pointed out that the gunner’s tools should actually be painted the same colour as the guns. Now I did know this but had decided to go with natural wood because I had done so for my other Prussian battery. This is also a bit of a hangover from years back as a teenager when I always painted all guns brown because I had no information and natural wood seemed logical. Anyway as you can see I have updated the tools.
Posted by Stryker at 13:12 13 comments:
Labels: Artillery, Conversions, Prussian

In my early teens I borrowed a copy of The Recollections of Rifleman Harris from the local library. Back then (in the dawn of time) this was one of the very few books on the Napoleonic wars available to the public at large. I’ve never looked at a copy since but my own recollections are that it was quite heavy going because of the 19th century style of prose

Much later in the 90s I very much enjoyed the BBC serialisation of the Sharpe novels although I never got on at all with actually reading them. Sharpe was an excellent programme in its day although it is of course a bit dated now. The early episodes did suffer somewhat from a lack of extras in the battle scenes but the spirit of the Napoleonic wars seemed to shine through. Perhaps it’s time for a remake with CGI?

My own version of the 95th rifles has now been made up to 24 figures and completed in line with my other units. I think they look quite smart and the 6 figures I recently painted blend in well with the original 18 figures painted by Matt G. All the figures in this unit are vintage Hinton Hunt ones that I assembled from different sources over the last ten years. They’re just waiting now for a chance to go over the hills and far away.
Posted by Stryker at 19:19 29 comments:
Labels: British, Skirmishers 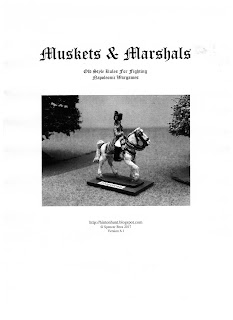 Following the last game I decided it was time to get around to revising my rules Muskets & Marshals to incorporate various ideas, suggestions and clarifications since the version we used for Vintage Waterloo. The updated rules don’t include any radical new ideas being more of a tweak to iron out a few glitches and hopefully facilitate game play.

For those of you who have tried the rules before I’ve summarised the main changes below:

Movement
There is a reduction in line movement rate to 4”.

Melee
An infantry unit that loses a melee against charging cavalry immediately breaks and routs – added “but not if it is an un-disordered square”. A unit losing 2 consecutive melees will rout unless defending a BUA

Multiple Melee – this is defined as follows: All melees are fought one on one during the initial turn of fighting regardless of formation. In the subsequent round a second unit may join with a flank or rear attack although this unit will not receive a charge bonus. The player with two units rolls the dice for his lowest rated unit of the pair plus 2 extra dice.

Morale
Introduction of a -1 for troops receiving fire from close range British volley fire (a volley is defined as 12 figures firing at a single target). This is to give British troops a good reason to fight in line and not just because the Duke keeps losing!

Pursuit
Becoming disordered after a pursuit is now on a die roll rather than automatic. A pursuing unit coming into contact with another enemy unit will melee but without a charge bonus.

Built up Areas
These are now properly defined in the rules. Up to half of the occupants of a BUA may fire from any side of the BUA (replaces the rule that 12 figures may fire). There is now a limit of 24 to the number of troops who may fire into a BUA.

Troops Types
I have extended the listings to include all the types in play. These can of course be varied by scenario if desired.

Mass Battles Rules – Firing I have removed this section as to my knowledge it has not been used in any of the large battles we have played.

Thanks to Stuart, Goya and Roy for their input.
Posted by Stryker at 19:20 10 comments:
Labels: Muskets & Marshals, Playing Soldiers

More recruits for the 95th 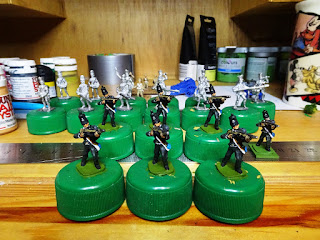 You may recall that Matt G painted some British rifles for me a couple of years ago as part of the big push for Vintage Waterloo. In fact we had so many rifles available when the great day dawned that there wasn’t enough room in the sandpit for them. Consequently they have seen very little action having only recently made their debut at the Battle for the Road.

These extra six figures will bring the unit up to full 24 figure strength and hopefully help to ensure their participation in future games. I had a slight problem trying to match the green of their uniforms to the green that Matt had used but I’m happy enough with the result now. I just need to rebase the whole lot to my light infantry standard system and then my rebasing project will be complete.

You will no doubt have noticed the batch of Prussian gunners lurking behind them. These have been cleaned up ready to receive black undercoat and there are enough of them to make up another three artillery batteries. We can blame Goya for this.
Posted by Stryker at 20:05 14 comments:
Labels: British, Skirmishers

At Talavera we stole Boney’s eagle (not this time you didn’t!)

Yesterday Tony, Goya and I convened in the drawing room at châteaux Foy to refight the battle of Talavera on Tony’s sumptuous wargame table. Tony had devised a clever three way player mechanism for C&CN that enabled each of us to have an independent command. Goya took the part of Arthur Wellesley, Tony played Cuesta and I took on the mantle of Marshal Victor (I thought the name sounded promising).

Tony’s clever system meant that I was able to play two cards per turn allowing me far more coordination than I would have had in a regular game of C&CN. The allies also played two cards but frustratingly for them it was only one each and in differing sectors of the table making it much more difficult to coordinate actions. The result was a French victory in a game that was neck and neck right to the last turn.


Thanks to Tony for hosting another truly superb game and to Goya for once again letting his British infantry run away (and also for not pushing me off the Fourth Bridge on the way home as had been suggested in the heat of battle). I’m looking forward to the next one!


And soon we were transported through hell and its fury
Through smoke and through fire, through shot and through flame
And at Telavera we stole Boney's Eagle
And in that short time we were heroes of Spain
Posted by Stryker at 14:17 4 comments:
Labels: Commands & Colors, Playing Soldiers
Newer Posts Older Posts Home
Subscribe to: Posts (Atom)