That’s what it says on the Hinton Hunt painting instruction sheet for AN.73 Austrian Cuirassier (mounted) charging so that's what my next unit will be. 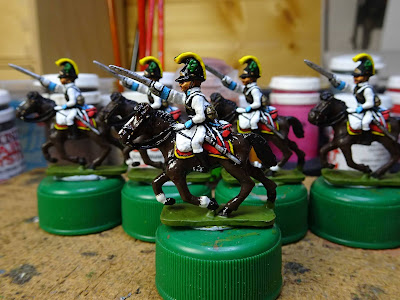 As I painted the test figure, I realised that it's very similar to the Austrian Dragoon figure in the unit I painted last year, basically the only difference is the addition of the cuirass and the removal of the carbine and wooden stake.

When this unit is finished, I will have a full brigade of Austrian Heavy Cavalry which the Allies are going to need if they’re to stand a chance against all that French Guard Cavalry.

We spent last week in a holiday cottage on the banks of Loch Ewe on the northwest coast of Scotland. We’ve been living (or more correctly ‘staying’ in the Scottish vernacular) north of the border for nearly five years now but I’m still blown away by the sheer beauty of the Highlands each time we venture out.

Until we arrived at Loch Ewe, I had no idea of the significant part it paid in WW2 as the base for the Arctic Convoys, where the ships assembled before heading out on the dangerous route to Murmansk in Russia. The Loch banks still contain many relics of that activity of 80 years ago which, of course was fascinating to me (not sure if Mrs S was so pleasantly surprised).

There is a small Russian Arctic Convoy Museum in Aultbea which is worth a visit if you’re driving the North Coast 500 and need a break from tailing all those camper vans. The exhibits tell a lot of personal stories from the participants in the convoys, explaining the incredible conditions that the sailors had to endure at sea during the Arctic winter.

As the route home on Friday took us to Inverness Mrs S indulged me by agreeing to a visit to Fort George. Although I’ve been to Culloden a couple times before I had never made it to Fort George and I’m really glad that we finally got there because saying it’s impressive doesn’t really do it justice.

Fort George sits on the banks of the River Ness and was built by the British following the Jacobite Rebellion to control access to the Moray Firth and inland to the Great Glen. It is a huge construction based on a Star design that remains virtually intact. It took 22 years to build and was said to have cost the equivalent of a whole years’ Scottish GDP (the modern equivalent would be the cost of five Trident nuclear submarines).

Mrs S thought that was a bit of an overreaction by the British, but I explained to her (patiently) that King George was understandably just a little paranoid that the Jacobites would have another go unless he cracked down hard on them. The main point of the fort was to prevent the French from sending troops, money or supplies to the Highlanders as they had during the 45.

I had no idea (until we got there) that Fort George was still an active military base being home to the Royal Regiment of Scotland. The accommodation blocks (improved from the original 18c ones) are neatly laid out in the centre of the fort around an impressive parade ground. There is also a very good Highlanders’ Museum which as far as I could work out houses exhibits on every one of the Highland Regiments except the Black Watch (who have their own museum in Perth).

I would say that Fort George is an absolute must for any history buff/wargamer wandering the Highlands but allow yourself at least 3 hours to look around (they do a great bacon butty in the café and a nice cheese & tomato bloomer for veggies - vegans can pick out the cheese).

To visit Fort George you must book in advance.

For quite a few years now I have wanted to find enough Russian gunners to field a battery or two of guns. Finally, I have scraped some together although they are the DK version of Hinton Hunt gunners as the real things are rarer than hen’s teeth. 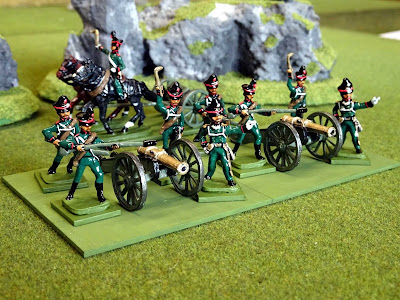 One of the things that has always impressed me with Roy’s Hinton Hunt armies is that he has a limber for every model gun – and there’s loads of them! I have determined to field at least one limber per army and hopefully over time a few more than that. 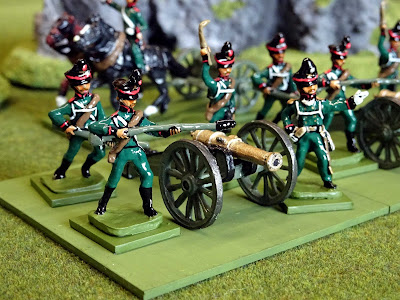 It’s been a nice break to paint these gunners after a year so far spent painting cavalry but there are already more horses undercoated and waiting on the painting desk.

Napoleon and all his friends (plus a relative)

It's taken me a few years but I finally have all the French Personality figures and Generals finished so I thought I'd better catalogue them here for posterity. All the figures were painted by me unless otherwise credited. 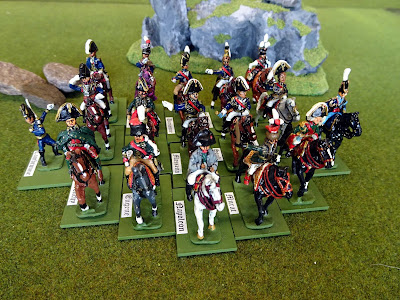 I suppose I'll have to get a shift on now with Wellington and his chums.

Junot first came to the attention of Napoleon during the siege of Toulon and went on to distinguish himself in the campaign in Italy. It was there that he received a head wound that was said to have changed his character making him unpredictable and rash.

In common with many of the other French officers he hated campaigning in Egypt and alleviated the boredom by duelling. After one duel where Lannes, Murat and Bessieres acted as his seconds they were all reprimanded by Napoleon who said they were “like silly crocodiles fighting in the reeds”. This didn’t go down too well with any of them, but Junot had to be sent home with a resulting wound.

He was sent to Spain in 1807 and created Duc d’Abrantes for capturing Lisbon but the humiliating defeat at Vimiero blotted his copy book further with the Emperor. The final straw came with his failure to pursue the Russians after the battle of Smolensk in 1812 and a furious Napoleon determined that he should never receive a marshal’s baton.

He returned to France in disgrace and is believed to have committed suicide, dying in 1813.