How about that? A unit painted and completed in less than a month and in temperatures never exceeding 7C in the Hut. Gentlemen, I give you the 60th Rifles.

Thanks to Tony for furnishing me with some superb castings to make up the numbers on this unit.

In other news, Goya and I managed to play out the CCN basic Waterloo scenario this week. I played the French and was completely trounced 8 to 1 by that cunning fox Wellington, what a drubbing!

The Rifles are finished and fully glossed up with three coats of varnish which should make them virtually bullet proof. I just need to cut out their plasticard bases and get them glued on and ready for action. 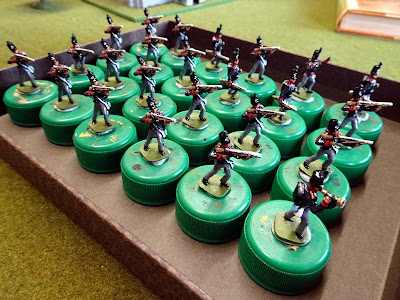 Mrs S did ask me if I’d blogged about my wargame related Christmas presents which I haven’t so I thought I’d better. Now, normally (as I’m sure you will agree) it’s best to buy your own such gifts to make sure you get what you want. This year though I did actually get several complete surprises so hats off to Mrs S with an A+ for effort.

All I can say is roll on my Birthday!

When will the madness end?

I must confess that I seem to have developed a bit of an FN5 Fusilier habit. I bought some last year but couldn’t believe when I checked after Christmas, that so many of the ex-Neville Dickinson figures were still on sale via Ian Hinds. I decided it was my duty to rescue them (as clearly none of you lot were going to) and as you see I now have quite a few.

My justification is that they really are superb first-generation castings with an excellent provenance and actually, the cost was only about the same per figure as a modern 28mm casting so obviously it was a never to be repeated bargain (that’s what I told Mrs S!).

Goya and I had another stab at C&C Medieval this week and played through the battle of Solachon scenario. More great fun with his 15mm Sassanids and Byzantines and this time it was a much closer run thing although I still lost. I won’t attempt a narrative but here are some pictures.

I was so inspired by the look of the 15mm Ancients on the CCM board that I broke out my own copy of CCN and tried out a set-up of the basic Waterloo scenario using my 15mm Napoleonics.

This idea definitely has legs and with the greater visual appeal using miniatures I am much more likely to play a game.

I’m just over halfway through my next unit which you must admit is a pretty impressive start to the New Year by my standards. These are more British Riflemen, but this time painted to represent the 60th regiment. 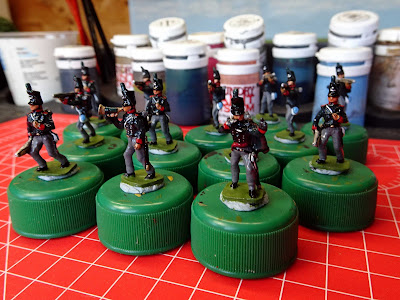 Two units of Rifles may seem a bit excessive however I had a few castings left over from the 95th and then Tony generously offered me some spare figures he had. What’s good about this setup is that it gives me the option to field a unit of rifles in close order and still have some for skirmishing or to double as KGL Light Infantry for defending La Haye Sainte etc. 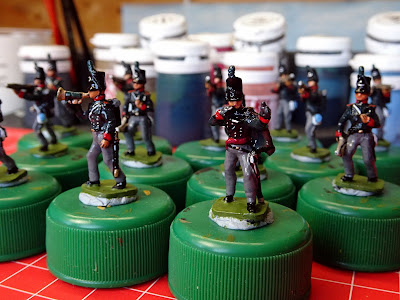 When I started painting these, I had decided to make them a second battalion for the 95th but part way in changed my mind and repainted them as the 60th. The red collars and cuffs adds a bit of variation and means they will be easily distinguishable from their more famous brothers helping to prevent them from suffering the indignity of ending up in the wrong storage box after a game.

The Prussian Fusiliers are complete and battle-ready. They’ve brushed up quite nicely and will be a useful addition to Marshal Vorwarts command and hopefully a thorn in the side of old Boney.

With this unit just sneaking in to my 2022 output I have brought my Hinton Hunt tally for the year up to 97 figures painted which is much better than I thought it was going to be. The only problem is that I seem to be acquiring figures more quickly than I’m painting them so need to up the ante for 2023.

Dabbling with Medieval’s (off topic #35)

Goya invited me over yesterday to have a stab at playing a scenario from the Command & Colors Medieval game. Although billed as Medieval the scenario was from 528AD involving Sassanids and Byzantines at the battle of Melebasa. My previous experience of playing ancient type games is limited to playing with Airfix Romans and Britons as a kid so I was intrigued to see how C&C tackled this period.

We used the board and terrain supplied with the game but instead of blocks the armies were drawn from Goya’s extensive collection of 15mm figures that he built originally for use with DBA. Using miniatures with C&C transforms it (in my mind) from a boxed game to a proper tabletop wargame - the ultimate example of this being of course Tony’s amazing set-up for C&C Napoleonics!

It turned out to be another gripping game as C&C games always seem to be. The subtleties of the combat mechanism (which at first glance appears quite simple) required the application of some serious generalship which is probably why I lost. This is definitely a game that I would like to play again!

Posted by Stryker at 19:51 4 comments:
Labels: Commands & Colors, Off Topic

I’ve been braving the arctic conditions in the Hinton Hut (currently 6°C inside and 1°C outside) to work through the Prussian firing figures and have finally finished them. Now they just need a couple more coats of varnish and then basing.

They actually turned out to be quite a lot of work as half of them needed bayonets replacing which I did by splicing in musket ends from some spare poor quality donor castings. The paint touch-up also turned out to be pretty much fully repainting them. I couldn’t salvage Clive’s standard bearer who had been converted from a charging figure, so this has been replaced with a PN5 (the figure without a musket) in keeping with my other Prussian units.

Overall, they are not the best unit in my army, but I think they will pass muster.