Having finished the 10th regiment I thought it would be an appropriate time to parade the whole of the French light infantry.


This completes the light infantry for my French army next I need to turn my attention to completing the infantry of the Guard.
Posted by Stryker at 18:37 15 comments:
Labels: French, Skirmishers

The 10th legere have now been expanded into a full 24-figure unit and quite splendid they look in their ‘Noddy’ style uniforms even if I do say so myself. They have also been rebased to my revised light infantry system so they can operate either as skirmishers or as a close order battalion.


I embarked on my light infantry upgrade programme because Roy and I had abandoned the use of skirmishers in our large scale battles and I wasn’t getting to use these units. Ironically, in the recent Battle for the Road the skirmishers proved effective and seemed to add quite a lot of fun to the game. Well, at least now these lads are guaranteed some table time whatever the scenario. 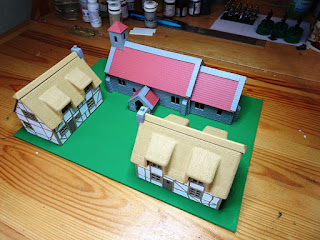 This is the finished Airfix (Dapol) village although I confess I think it is probably ‘somewhere in Surbiton’ rather than Belgium. These kits were of course devised for use with model railways and their original designers may have been horrified if they discovered they became the focus of so many large scale battles during the 60s and 70s.

I actually only ever possessed one cottage and La-Haye-Saint model back then so I’ve enjoyed making these up to provide real estate for my Hinton Hunt’s. The only remaining kit I have to make (eventually) is the windmill which I will be using to provide the emperor with a suitable command post.

These scenic items have been long overdue and I now feel I have enough buildings, trees and hills etc. to properly populate a 6’ x 4’ table.
Posted by Stryker at 12:47 11 comments:
Labels: Scenery

This is the finished version of my converted Airfix La-Haye-Sainte model. The building has been cut down in size to give a smaller footprint than Hougo-Sainte although it has been mounted on the same A4 sized base.


I’ve enjoyed making and painting these models and now I just have the village base left to complete.
Posted by Stryker at 15:06 19 comments:
Labels: Scenery

After our recent battle, as he was packing his soldiers away, Tony unexpectedly offered me his unit of Brunswick Hussars which he claimed to have no further use for. Now I wouldn’t normally accept payment for umpiring a game (well, not after the event anyway) but these were genuine vintage Hinton Hunt castings and already painted to an excellent standard so I said yes please!

This little windfall has meant I have been able to expand my existing 6-figure squadron to a full 12-figure unit which had been on my wish-list for quite a while. Tony’s style of painting and the colours he used have blended in incredibly well with my own figures with just a couple of very minor tweaks. I have to say I am chuffed with the result.

Tony’s troopers included a nicely converted trumpeter and a rather splendid commander figure. The commander is converted from BN/252 Earl of Uxbridge and rides a Les Higgins horse. I will be using this figure to represent Colonel Elias Olfermann who took command of the Brunswick Corps following the death of the Duke of Brunswick at Quatre Bras.
Posted by Stryker at 14:20 17 comments:
Labels: Brunswick, Light Cavalry In the end I decided to spare my old model of La-Haye-Sainte and by performing some modest surgery (cutting off the garden wall) managed to squeeze it onto an A4 sized piece of MDF. The old version can be glimpsed here.

I’ve decided to go with Roy’s A4 system of bases to represent BUA’s rather than base the buildings individually. I haven’t bothered with flock or any fancy stuff and have just given the base an old school simple coat of green matt household paint (B&Q “Sherwood” if you’re wondering).

I plan to have three BUA bases in total and these will be the two farms (Hougo-Sainte and Sainte-a-Mont) and a village base with both cottages and the church (Plance-not). I think this will really be all that I need for the scale of games I’m likely to be playing as I do like to keep a fairly open battlefield.
Posted by Stryker at 19:16 10 comments:
Labels: Scenery
Newer Posts Older Posts Home
Subscribe to: Posts (Atom)