I’m finally back in the saddle and so are my Imperial Guard Horse Grenadiers. Quite how Vintage Waterloo can be achieved if I carry on producing figures at this snail’s pace I don’t know. I just hope that Roy is having better luck. 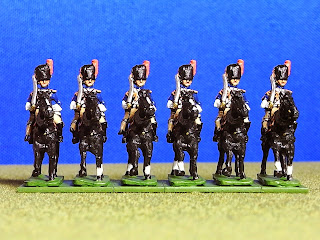 I did enjoy painting these, the black horses in particular, but it’s frustrating when you have to stop and start because of lack of time. The uniforms are understated considering this is a Guard unit but then the Guard infantry uniforms are as well. I have sufficient DK one-piece castings to eventually make up a full 12-figure unit but for the time being they will be brigaded with my Guard Polish Lancers. 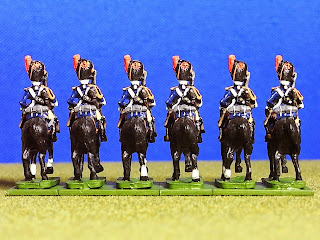 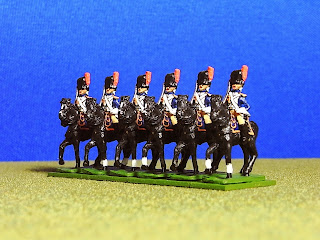 Just for the record the figures are all vintage Hinton Hunt ones. The rider is FN/300 Horse Grenadier Guard mounted on horse FNH/2.
Posted by Stryker at 20:21 5 comments:
Labels: French, Guard, Heavy Cavalry, Vintage Waterloo

Finding myself confined to the sofa following some surgery on Monday I’ve been indulging in some DVD downtime. Yesterday I started with the Dino De Laurentiis epic Waterloo a film I watched as a teenager in 1970 when it was first released. I’ve watched it again on DVD several times more recently but mostly as a background noise while I paint which is silly really because as a sound only experience it’s pretty poor with the exception of “By God sir I’ve lost my leg” and “By God sir so you have!”

Actually though a lot of the action scenes are really good when you consider that it is all live action with no CGI. It’s easy to criticise some of the milling about of men and the unlikely looking cavalry charges but it must have been a nightmare to coordinate and direct the scenes. My main criticism is that the first half hour or so of the film is taken up with a rather boring preamble presumably designed to broaden the audience interest from merely that of the action film type. It fails miserably in that aim and surely it would have been better to add a depiction of Quatre Bras and Ligny instead? I’d still give it a score of 7 out of 10 though – a classic.

Next I moved onto the 1968 version of Charge of the Light Brigade. I never saw this at the movies but I’ve watched it several times on TV and more recently on DVD. The film had very poor reviews when first released but I just can’t understand why as it’s probably my favourite war film. Unlike Waterloo the preamble has a point to it and fits seamlessly into the action sequences at the end. Trevor Howard is brilliant as Cardigan and although all the characters are more like caricatures it all works really well. The action scenes at the Alma and then the charge itself at Balaclava are very well done and seem believable. I have to give it 10 out of 10.

For one reason or another (unrelated to wargaming) progress on the Horse Grenadiers has been painfully slow. This is particularly embarrassing for me as Roy’s contribution towards Vintage Waterloo is continuing to snowball. Every few days I’m receiving emails from him that say things like “Hi Ian can you update me to 6 battalions of French line and two battalions of French legere” and “I found 24 painted Old Guard Today, with officer, drummer, standard bearer and sergeant which means that I can have them on card tomorrow!”. Only Roy (and possibly Clive) could find 24 painted Old Guard figures in a drawer that he didn’t know he had! 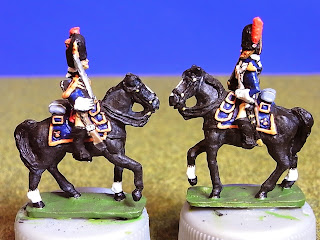 However my 6 figure squadron of French Guard Grenadier-a-Cheval troopers is now complete; they just need varnishing and basing. I paint the riders and horses separately so I only get to see the full effect when I glue the troopers to their saddles at the end. This is always a bit of a delicate process as they do like to slip about but by gently squeezing the legs to grip the horse they can be made to stay upright long enough for the Araldite to set. 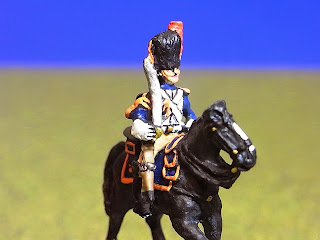 Next I’m hoping to add some more French Carabineers to the 6 that I already have to make up a full 12 figure regiment. As I’ve already mentioned, Roy and I have decided to field 12 figure cavalry units for Vintage Waterloo rather than the 18 figure units we were using before. This is chiefly because its hard work finding 18 Hinton Hunt cavalry figures of the same type but also because smaller units are a bit easier to manoeuvre around the table. I’ve made some amendments to my Muskets & Marshals rules to accommodate the smaller sized units and I’ll make these available for download once I’ve edited them.

On the subject of rules I’m also looking at the idea of using unit information markers that will sit on the table next to each unit to help us keep track of things. There will be quite a few units on the table and I think we need a way to identify them without resorting to roster sheets. The current idea is to display the “Troop Type” (a letter denoting combat/morale score), the parent unit formation (orders will be issued at divisional level) and a leader icon that can be crossed through if the unit’s Colonel becomes a casualty. Variations of a prototype idea are shown above but this is still a work in progress.
Posted by Stryker at 19:57 8 comments:
Labels: French, Guard, Heavy Cavalry, Vintage Waterloo
Newer Posts Older Posts Home
Subscribe to: Posts (Atom)