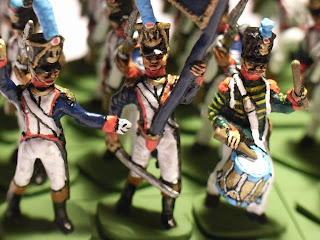 This is another shot of my command group for the fusiliers of the French 45th Regiment. I realised that I had made a few changes to the final version of these figures since my original post and thought that this was a much better photo anyway.

I had initially painted some blobby buttons on the white parts of the tunics but these looked huge in close up so I removed them. Knowing how far to go with detail on these Hinton Hunt figures is always a bit of a dilemma. Sometimes less is more particularly with my limited level of painting ability.

I am still plodding away at those Scots Grey’s after the break last week. You will be pleased to know that all six of the horses have finally been painted – now for the riders.
Posted by Stryker at 09:17 5 comments:
Labels: French 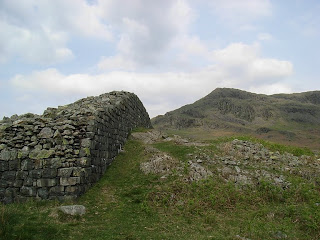 We’ve just come back from a trip to Cumbria where one of the highlights for me was a white-knuckle car ride through Hardknott Pass (1 in 3 slope) down to the ruins of Hardknott Roman Fort.

Built during the reign of the Emperor Hadrian, the ruins are well preserved - the walls in places are 8 foot high being far more impressive than the remains of Hadrian’s Wall built at the same time. They cover a surprisingly large area strategically situated on top of a 2,000-foot high hill with spectacular views across the valleys on either side.

The fort was apparently built and manned by a Cohort of Dalmatians all the way from Croatia. They must have felt that they had been posted to the edge of the world stuck in such a barren and desolate landscape. Their job was to subdue the local tribes and protect the route of the road from Ravensglass on the coast to Ambleside inland. 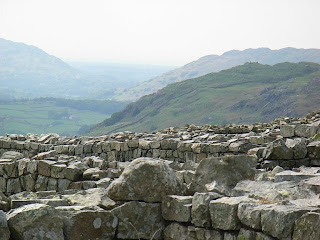 The setting is stunning and I can’t recommend the place highly enough for any history buff passing through the Lake District. Other family members will enjoy the spectacular scenery and bored teenagers could be enticed with promises of an exciting death defying drive through Hardknott Pass – surely better than Alton Towers?

If approaching from the east via the pass I recommend you drive a 4x4 unless you’re a trained rally driver or perhaps just hire a helicopter.
Posted by Stryker at 15:08 No comments:
Labels: Off Topic 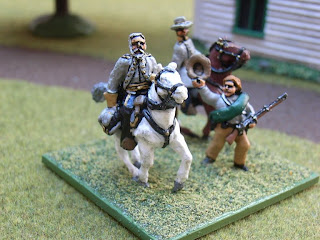 The mounted figures are 15mm ACW figures by Freikorp. Their series of personality figures are full of character and I just had to paint ole’ Bobby Lee. The foot figure is a Polly Oliver 15mm (more like 18mm) Rebel infantryman now produced by AB figures. These have to be absolutely the best 15mm ACW figures ever produced.

The group forms a command stand for a Fire & Fury project I am (slowly) working on. My aim is to produce enough figures to play a game based on the fight for Henry House Hill. Now, I know Lee wasn’t present at Bull Run but as FreiKorp don’t produce a figure for Beauregard he will be standing in. After all, who ever heard of playing an ACW game without Lee?
Posted by Stryker at 20:35 4 comments:
Labels: Off Topic 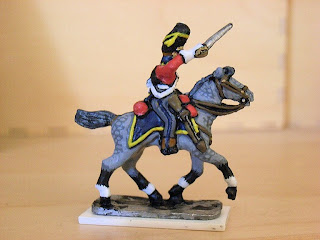 Well it had to happen didn’t it? I did say that I was only 90% happy with the painting of my Scots Grey’s horse and things only got worse when Mrs S said she didn’t think it looked very good either. That was it – the more I looked at it the more it began to resemble the spotty dog in the Woodentops*.

So it was back to Dallimore to re-read his tips on painting dapple grey’s – “not as difficult as you may think” he says! With that, some tranquillisers, and a few pictures of horses I Googled I was ready for another bash.

By starting with a darker grey as my base tone and putting black socks on the legs I seem to have achieved a slightly more realistic result. This time the finished article looks less like an extra from Mary Poppins and a bit more like a menacing trooper from the Royal North British Dragoons. I hope you agree but to put me out of my misery please feel free to leave a comment!

*If you don’t know who the Woodentops were click here.
Posted by Stryker at 09:32 7 comments:
Labels: British, Heavy Cavalry, Scots 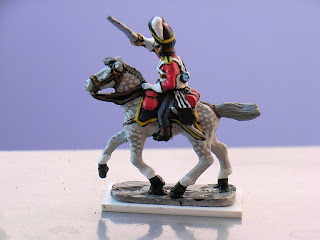 This is my test figure for the Scots Grey’s. Whenever I start painting a new batch of models I always have a run through with one figure first. This is pretty vital with Hinton Hunts as there are so many grey areas (no pun intended) and it makes it a lot easier with the rest of the figures if I have already worked out the best way to paint each bit of detail.

As I suspected, the dapple grey effect on the horse has been the hardest part of this one. By referring to my Foundry Kevin Dallimore bible I felt confident I could achieve the right look but my first attempt ended up looking like a rocking horse – not very likely to terrify the French! I had to strip the paint off that one and start again.

This is my final offering. I am 90% happy with the result although the horse still has a touch of the fairground ride about it. Anyway, I know I don’t have the skill to make it look any better so this is how it will stay. The rider is more successful than the horse in my opinion. I have another five figures to paint to complete the full squadron.
Posted by Stryker at 18:38 No comments:
Labels: British, Heavy Cavalry, Scots
Newer Posts Older Posts Home
Subscribe to: Posts (Atom)