To be continued.
Posted by Stryker at 21:03 21 comments:
Labels: Playing Soldiers, Vintage Leipzig 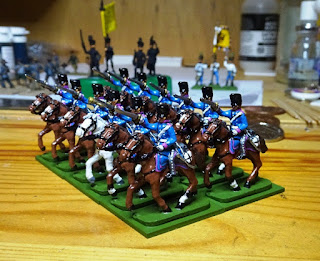 Just in the nick of time for Vintage Leipzig here are the completed 6th Naumarkisches Dragoons. The figure used is PN.81 Prussian Dragoon (mounted) charging. All the castings are reproductions figures (but nice ones) and the trumpeter is a conversion from the same figure.

I didn’t have a unit of Dragoons in my original 1970s Prussian army but always wanted one having been inspired by the illustration of a trooper of the 1st Koningin Dragoons in my Blandford Uniforms of Waterloo. I went with the Naumarkisches regiment simply because this is the uniform described in the Hinton Hunt painting instructions.

I’ve actually accumulated quite a force of Prussian cavalry now when these are added to the Cuirassiers and Uhlans. All three regiments will shortly be seeing action in Blucher’s Army of Silesia in the forthcoming Leipzig game.
Posted by Stryker at 20:14 12 comments:
Labels: Heavy Cavalry, Prussian, Vintage Leipzig 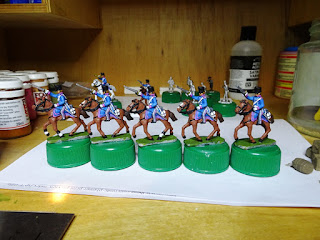 An unexpected burst of painting activity saw me complete my Prussian dragoons this week. I even managed to paint all the buttons in one hour which is a personal best. I think the secret may be painting five figures at one time (rather than my normal two or three with cavalry) as I was less critical of my work – I often revisit a figure unnecessarily because of some perceived minor blemish that will never be noticed on the tabletop.

I also took the time to clear up my painting desk which had been cluttered all year with too many things on the go. My new regime will be to paint only 6 infantry, 3 cavalry or a gun and crew at any one time. I’ll allow myself to have the next batch undercoated and ready but apart from that everything else will be cleared out of sight. This way I can switch between units and projects as much as I like but only after a batch has been completed.

I just need to get these figures varnished and based and then they will join the other half of the regiment to make a full 12 figure unit.
Posted by Stryker at 11:46 10 comments:
Labels: Heavy Cavalry, Prussian 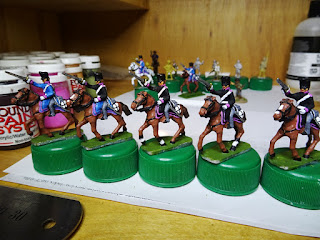 Those five Prussian Dragoons are still on my painting desk and I’m gently easing them towards completion. I’ve noticed that I’m slowing down as I approach the point where I will have to add all those white buttons. However I still hope to have them ready in time for the Leipzig game.

It’s over ten years since I started this project (and nearly ten years since I started this blog) and I have to confess that I am running out of steam a bit now. A roll call reveals that I have 23 units of infantry (including my skirmish units), 11 of cavalry and 9 artillery batteries and that’s more than enough figures for one-on-one or solo games. The balance is a little off with the French being outnumbered but this can always be rectified by some unorthodox alliances.

I still have a fair few units that I want to paint including more Old Guard infantry, Brunswick infantry, Eclaireurs, and of course more Prussians but strictly speaking I don’t actually need them in order to play a decent game. It all comes down to painting time I guess!
Posted by Stryker at 11:21 11 comments:
Labels: Heavy Cavalry, Prussian, Vintage Leipzig, Waffle

When Roy and I were sorting out the details of Vintage Waterloo we had the luxury of playing a test game which was very valuable particularly in terms of working out deployment. We won’t be having the same opportunity for Vintage Leipzig so I’ve been trying to give as much thought as possible to the way we should run the game. 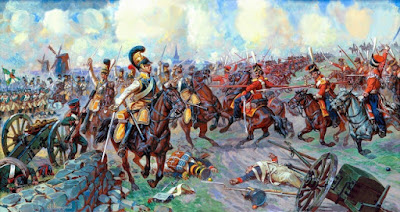 Waterloo was a relatively easy battle to game as it was fought on a single day over a quite small area. Leipzig presents more of a challenge as it was fought over several days across a large area with vast forces. Clearly we won’t be able to accurately portray either the terrain or all the troops involved in the real battle in one day’s play so it will be necessary to scale everything down while trying to retain the flavour of the epic struggle fought out in October 1813.

Roy has two tables in his wargame room the larger of these is 12’ x 5’ and the smaller is 8’ x 4’. The plan is to utilize both of these with the large table representing the area south of Leipzig and the smaller one the area to the north. The suburbs of Leipzig will be represented on both tables and there will be three villages spaced out along the tables to act as victory locations. The rest of the terrain will be relatively open and flat to allow space to deploy the 2,800+ figures we will be using in the game.


Victory Conditions - at the end of play victory will be determined as follows:


The order of battle has been scaled down to provide four commands to each side giving us a total of eight players which is as many as we can comfortably accommodate. I’m hoping the game will provide some interesting challenges to both sides in particular the fight for the northern table where the allies will outnumber the French but the difference in troop quality should balance things out.

Reserves are kept off table and can be deployed at any point on the owning army’s base line from the start of turn two. Troops will not be allowed to switch between tables so deciding when and how to use reserves will require some careful thought.

One valid criticism of my rules Muskets and Marshals is that Old Guard units rated as A+ are fairly indestructible in melee (although they can be shot just as easily as lowly Landwehr). So for this game Old Guard units will be rated A and Young/Middle Guard will be rated B which can be justified by the drop in quality of units following the campaign of 1812.

In total there will be at least 95 units of infantry, 35 of cavalry and 39 artillery batteries in play in this game and whatever happens it should look quite spectacular. There will of course be copious photos posted here following the game.

Oh, and I forgot to mention there will be a RHA rocket battery…
Posted by Stryker at 13:30 11 comments:
Labels: Vintage Leipzig
Newer Posts Older Posts Home
Subscribe to: Posts (Atom)