Grey is the new Black 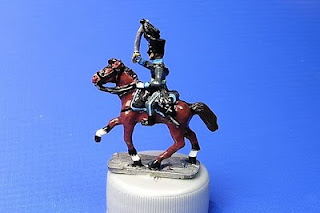 I’ve completed painting my test figure for the Brunswick hussars BRN/17 Death’s Head Hussar (Horse Attached Series) charging. I had hoped that painting what is basically a completely black clad figure might be easy but I also had my suspicions that it might not be.

In fact it has been a bit of a pain in the proverbial trying to get this one right. My first attempt used a very dark grey for the uniform that looked ok close up but at a distance provided no contrast at all with the cross-belts and lace etc. I decided to repaint the uniform with a lighter grey and this seems more effective when viewing the figure at a normal playing distance.

However, I confess that I’m still not totally happy because now he doesn’t seem quite black enough. I have resisted another re-paint attempt by telling myself that in reality black uniforms would very quickly have faded to grey and that therefore grey is the more realistic choice but I’m not sure who I’m kidding. Any suggestions on how to resolve my dilemma would be welcome.
Posted by Stryker at 20:09 6 comments:
Labels: Brunswick, Light Cavalry 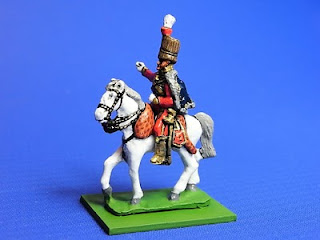 Sir Stapleton Cotton was born in 1772 and entered the army as a second lieutenant aged 18, by the time he was 21 he was colonel of the 25th Light Dragoons. He saw action in India and later rose to prominence in the Peninsula where he became the commander of the British cavalry. He was personally thanked by Wellington for his role in the victory at Salamanca in 1812 but missed out on the top job at Waterloo because he was passed over in favour of Uxbridge (he was none to happy about this). Cotton was nicknamed the “Lion d’Or” for his bravery and love of over-the-top uniforms. He was in military service for a total of 73 years and fought in 17 battles finishing up as a field marshall.

The figure is a David Clayton produced casting of BN/255 Lieut-Gen Sir Stapleton Cotton in Hussar uniform and busby (on horse BNH/13). I have found that Clayton personality figure castings are almost indistinguishable from vintage castings and this one was in perfect condition. The uniform is based on a picture of Stapleton Cotton in my copy of Blandford’s Uniforms of the Peninsula War that seemed suitably ostentatious. I really enjoyed painting this one – the leopard skin in particular was a bit of a challenge.

I must confess that I had never heard of Sir Stapleton Cotton prior to acquiring his miniature likeness, as, despite having a reasonable amount of Napoleonic related literature, his is not a name that had registered in my mind. So I was more than a little surprised to read the facts about his impressive military career. I have decided therefore to put him in over all command of my Allied cavalry, a position he can hold without concern, as Uxbridge is one of the Hinton Hunt personality figures still missing from my collection.

So, not a bad start to the year – one rider and horse painted.
Posted by Stryker at 20:39 10 comments:
Labels: British, General Staff

Apart from the Napoleonic period my other main wargaming interest is the American Civil War. This is undoubtedly the result of exposure as a child to ACW related toys that became available here in the UK around the time of the Centenary. The most fascinating of these to my young mind was a bloodthirsty series of Civil War bubblegum cards. I still have them (my favourites are framed on our hall wall) but when I look at them now I’m amazed that they were ever put on sale to children! 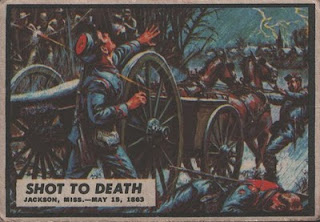 Of course the other big event at the time was the release of the Airfix range of HO/OO ACW figures and my brother and I had boxes and boxes of them. They were continually deployed on the carpet fighting battle after battle over dressing-gown hills. Their ranks included the famous “hello Mum” running man (as immortalised on Matt’s blog) and those brilliant Officers who looked liked pirates. Being the older of the two of us I suppose my brother got first pick at sides and I got lumbered with the Yanks, but it never felt like second prize. 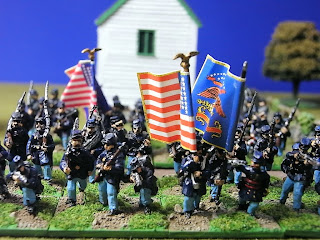 Just over 10 years ago I decided to collect two 15mm ACW armies for Fire & Fury and the recruiting of these forces has been incredibly slow. One reason of course is that the Hinton Hunts have come to dominate my hobby time leaving very little time for other projects. So last autumn I decided to give up on painting the remaining 200 or so figures myself and turn for help to the Blue Turkey painting service. 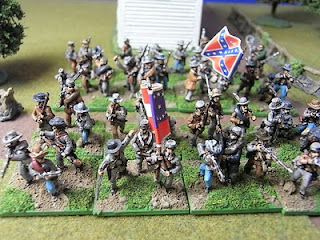 I was really impressed with the service from Alan at Blue Turkey – he quoted a very reasonable price and delivered exactly when he said he would with all the figures painted to the same high standard as his original sample figure. In fact it has probably taken me longer to base the figures than he took to paint them. It may not be long before the Yanks and Rebs do battle again although this time it won’t be on the carpet as I don’t think either of us could manage all that crawling around on our knees now.

I did say that I would finish painting my French Grenadier battalion before Christmas and I actually did. It’s taken me since then however to get around to basing and photographing them. So without further ado here they are:

All the figures are vintage Hinton Hunt castings painted by yours truly. 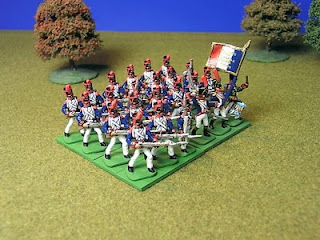 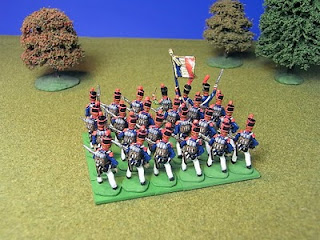 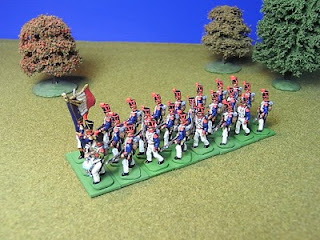 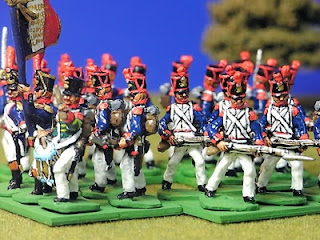 So what you see above is my entire painting output for 2010 a fairly pathetic total I’m sure you will agree. Let’s hope 2011 will be a little more generous towards me in terms of painting time.