Here are some more of the David Clayton produced figures that I recently received from John in the US. These are all figures that were originally included in bag BB09 French Line Infantry 1798-1806 and listed in the Hinton Hunt catalogue as "French fusiliers in bicornes worn 'fore and aft', coat, breeches and gaiters." 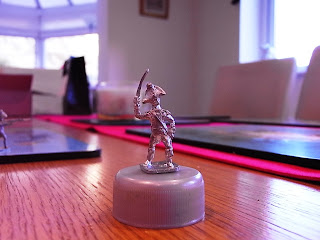 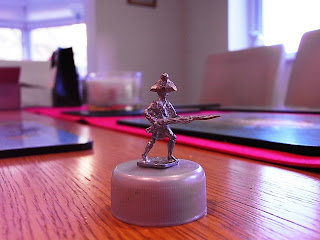 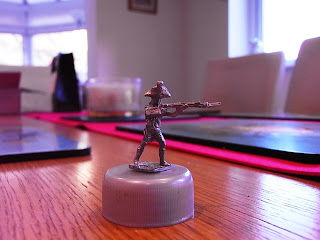 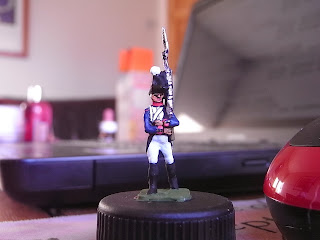 FN/277 Private (marching)
I liked this one so much I just had to paint him!

I’d never seen any of the figures in this range before these lads arrived in the post. I have enough of them now to put together a mixed figure unit for the young general Bonaparte to command.
Posted by Stryker at 09:42 6 comments:
Labels: David Clayton Figures, French

I was lucky enough to receive a box of Hinton Hunt goodies this week sent by John from the US, who had been having a bit of a clear out. The figures are all David Clayton ones that were produced in the US a few years back. 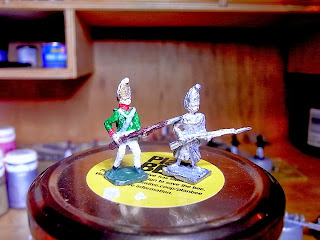 The charging figure on the left is a straight copy of the original Hinton Hunt figure RN/4. The one on the right is a Clayton addition of a charging figure in greatcoat - he's a bit small and chunky compared to his friend.

David Clayton acquired the rights to produce Hinton Hunt figures in the 1980’s and as far as I can make out continued to sell them right up until the early noughties. Approximately half of the figures in my collection are Clayton ones and they vary considerably in quality. I believe this is because very few of the master figures were in his possession so new moulds had to be made using production figures with an inevitable loss of detail and size. 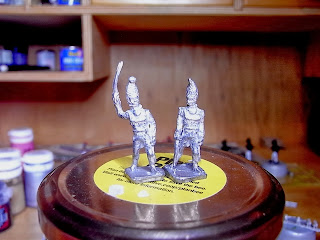 These are the officers - again the figure on the left is taken from the original figure RN/1 but I'm not sure about the one on the right as it's not listed in my 1974 Hinton Hunt catalogue (although Clayton lists him as RN/6).

Clayton sold the figures in bags of 50 with mixed poses and command figures included in each bag. John sent me figures that he originally purchased this way including Pavlovski Guard Grenadiers (probably from Clayton’s bag BB150 Russian Imperial Guard Grenadiers). This is neat because it means that I now have examples of all the following: 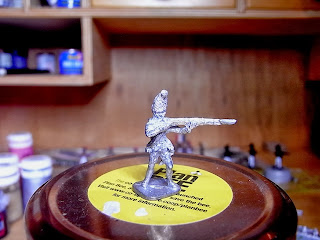 This is my favourite RN/5 Guard (firing) - almost as good as a vintage figure but a bit smaller and without that satisfying heft of an original casting. Nice though and I will certainly be including this one in the ranks of my Russian army.

Clayton produced some figures himself to fill in the gaps in Marcus Hinton’s original range (I’ve marked these with a ‘*’). Notable amongst these are the flag-bearer and drummer figures. These figures are pretty crude sculpts and I’m not quite sure what Mr Hinton would have made of them. 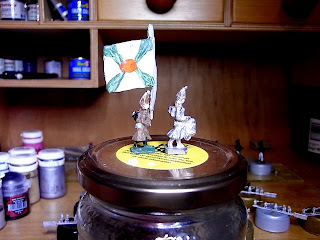 These command figures are Clayton additions but are rather chunky and crude castings. I think I would prefer to convert one of the officer figures as a flag-bearer. However it's interesting to see these.

I already have some marching Pavlov’s waiting in my lead pile but having these new castings will give me the option to form a second unit of charging figures or possibly one of mixed poses. Of course at the moment I’m supposed to be concentrating on my French forces but those miter grenadier caps do look enticing!
Posted by Stryker at 20:24 8 comments:
Labels: David Clayton Figures, Russian
Newer Posts Older Posts Home
Subscribe to: Posts (Atom)