My own Bunker at last!

Very little figure painting is going on here because I have spent most of the month preparing the business premises we have just taken on for our Internet shop. We have been running the business partly from home and partly from the Self-Store down the road and have finally taken the plunge into the world of rent and business rates. 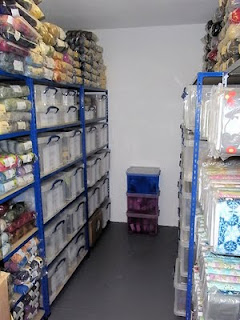 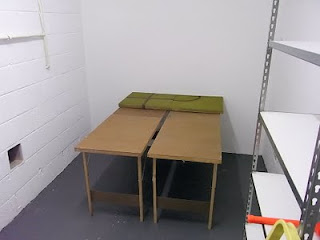 For the first time since I was 12 years old I have a space for a permanent wargame table. At the moment I have just put up two wallpaper pasting tables that I’ve had as a temporary table for many years that give me a 6’x 4’ playing area. The garage is big enough however for me to eventually build a permanent 4’x 8’ table. There are no windows which all adds to the bunker feel but I will be able to brighten the place up with some prints and stuff I’ve had tucked away since we moved last year.

First though, there are still a whole heap of things to do at the new unit (click here to see what I mean) and of course if the business doesn’t make enough money the stock may have to come back to the garage again so please if any of you have partners, relatives or friends who buy quality hand-knitting yarn forward them to Great British Yarns!
Posted by Stryker at 20:28 4 comments:
Labels: Waffle 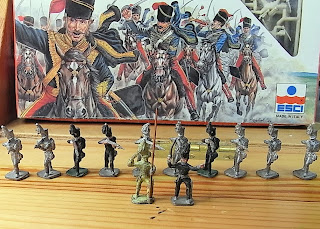 As if the wobbly world economy isn’t worrying enough it now appears we need to be concerned about another potential crash because amazingly I managed to buy these 12 Hinton Hunt figures on eBay for a mere £12.50 at the weekend!

I haven’t made more than the occasional token bid on eBay for a long time now and certainly never expected to end up winning this lot. They are however a very welcome addition as I have another 12 or so Clayton castings already and this will mean I can finally make up a proper 24 figure unit.

The firing figure is BRN/5 Brunswick Infantry (firing) and the officers are BRN/1 Brunswick Officer (charging). One of the Officers has been converted into a standard bearer, which is a bit of a bonus. All of these figures turned out to be vintage castings in excellent condition.

In the background is another eBay acquisition that arrived in the same post. I’m having a little bit more trouble than I hoped resisting my Crimean War project – this set is from ESCI (set 220 Lord Cardigan’s 11th Hussars).
Posted by Stryker at 19:38 2 comments:
Labels: Brunswick 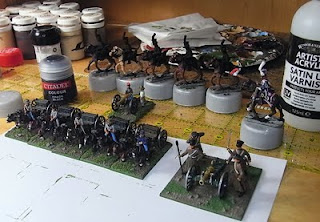 I’ve been trying to clear up my painting desk and get rid of a few bits and bobs that have been hanging around for far too long so that I can concentrate once again on painting Hinton Hunts. My hobby time has been pretty limited of late and I can see no change in that situation on the horizon so it seems like a good idea to try and be a bit more focused.

My 15mm ACW project is getting tantalisingly close to being completed (yes I did say completed!). I only have to paint up three more infantry stands and I’ll have all the forces I need for my Henry House Hill Fire & Fury scenario. Just finished are a batch of limbers – I don’t like painting limbers very much and some of these were undercoated in the late 90s - better late than never I guess.

Then of course there is a little distraction in the shape of a Crimean War Russian artillery gun and crew. So what on earth am I doing wasting valuable painting time on that? Well I was in the local Model Shop and I saw this tempting looking box from Emhar (you know how it is) and anyway, I’ve always wanted to paint some Crimean War stuff. Hopefully that’s the beginning and end of my Crimean War project.

Waiting patiently at the back of the desk are the remaining five HH Polish Guard lancers – I will be finishing them soon.
Posted by Stryker at 18:28 4 comments:
Labels: Waffle 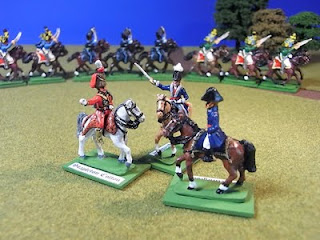 Not much painting going on so here's a picture of Stapleton-Cotton, Ponsonby and Wellington at the recent Allied Light Cavalry review.

In the background the Austrian and Brunswick Hussars are being put through their paces.

I'm still working on those Polish Lancers (well I have the horses done - almost) but it may be a little while before they are completed and ready for a photo.
Posted by Stryker at 10:28 4 comments:
Labels: British, General Staff
Newer Posts Older Posts Home
Subscribe to: Posts (Atom)