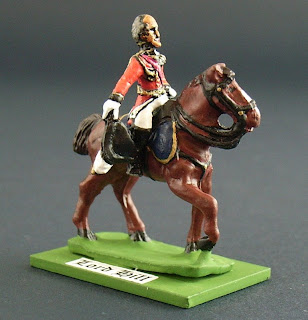 This figure was sent to me by Roy who claims to have more than a passing resemblance to the subject. Well, I don’t know about him but I do know that Lord Hill’s hairstyle as depicted here by Hinton Hunt is very similar to my own. The figure is BN251 Lord Hill mounted on BNH11 General’s Horse, painted by yours truly.

Hill had a distinguished career during the peninsular war where he served first under Sir John Moore and then Wellington. He took part in many of the major battles including Corunna, Talavera and Vitoria. At Waterloo he commanded II Corps and personally led Adam’s brigade against the Imperial Guard.

Known affectionately by his men as ‘Daddy Hill’ he is reputed to have only ever sworn on two occasions, one of these was during the hard fought battle of Nive where he repulsed Marshal Soult’s attack. I don’t know what prompted the second occurrence but perhaps it was something to do with a visit to his barber?

Wellington said “The best of Hill is that I always know where to find him”.
Posted by Stryker at 14:54 6 comments:
Labels: British, General Staff

The Emperor and the Duke (Off Topic #6) 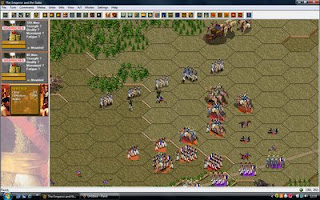 It’s been quite a few years now since I played a wargame with miniatures although I hope to do so again soon. Instead I have been engaged in a series of play-by-email games from the brilliant series of hex-based wargames by HPS. These games will never win any prizes for graphics and are pretty uninspiring if playing against the computer but against a live opponent they provide a truly excellent wargame on a scale that is mind-boggling.

My brother and I are currently re-fighting the entire Waterloo campaign over a map that stretches from Charleroi to Waterloo and covers over 140,000 hexes! Every single battalion and battery of the armies involved is represented and each player has total control over tactics, formations and leaders in what has become a totally absorbing game. By using the scenario editor we have been able to deploy our forces in complete secrecy adding greatly to the built in fog-of-war element in the game.

The picture shows a detail of an area of the game at 5.00pm on June 15th 1815. Ney (that’s me in this action!) has just won a costly battle at Gosselies on the Brussels Road where Zieten’s I Corps Prussians had rather annoyingly decided to hold up my advance. You can see elements of Vandamme’s III Corps mopping up the Prussian rear-guard – click on the image to zoom in. The Emperor himself is at an undisclosed location that must remain classified for the time being just in case Wellington’s spies get to read this.

If you’ve never played one of these games check out the HPS website.
Posted by Stryker at 20:00 4 comments:
Labels: Off Topic 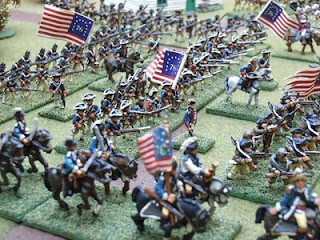 I have just been rearranging my display cabinet (trying to squeeze in a few more Hintons) and in the process had to remove some of my 15mm AWI collection. I had forgotten how nice these figures are and decided to hold a review before consigning them to a storage box. 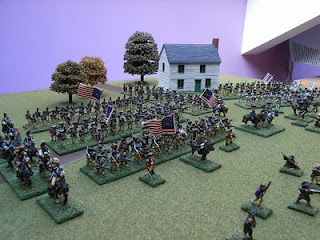 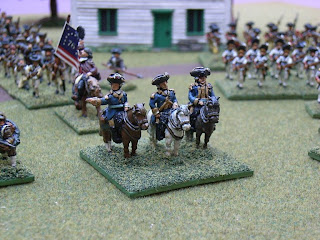 I lived in Boston for 3 months towards the end of 1976 and there was plenty of bicentennial stuff going on at the time. That experience has led me to lean towards favouring the Americans in this particular conflict even though I am generally a royalist. Poor King George never got over losing the colonies and I can see why as New England is a spectacularly beautiful place. On the other hand would you really want to rule over a country that could be so wasteful with tea? 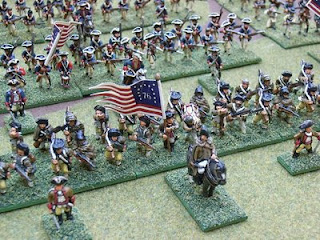 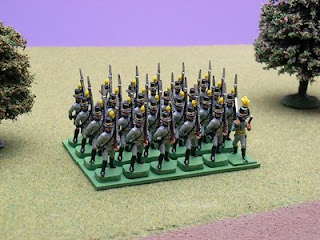 Now I did say a while back that I was working on some more Austrians. Well, I am but I remembered that I had prepared some Swedes for painting a couple of weeks ago and I don’t like leaving loose ends. This is another unit of marching figures to represent the 3rd Kajana Regiment, the officer is a Minifigs S range Tyrolean Jager.

For those of you who don’t know, I bought a load of these figures from the US last year in a moment of madness – enough for 9 units of 24 figures, and then some! They are not official Hinton Hunt and their exact origin is still a mystery, I am sure they are not Clayton or der Kriegspieler and (according to Steve) they are too good to be home-cast efforts. I know that other gamers have them in their collections so they must have been a commercial offering but who made them? Answers on a postcard please.

I don’t strip these figures and re-paint them fully as I do with my vintage castings because there are just so many and to be honest they don’t inspire me as much as some of the other items waiting in the painting queue. They get a clean up and touch-up although this is still pretty time consuming as the only bit I don’t repaint is the belt and hat badge. Together with the 3rd Alderkreutz and the 2nd Abo, the 3rd Kajana Regiment completes my first Swedish Brigade. Generals K & A are proud as punch and can’t wait to hold a full parade of the lads.
Posted by Stryker at 12:16 16 comments:
Labels: Swedes 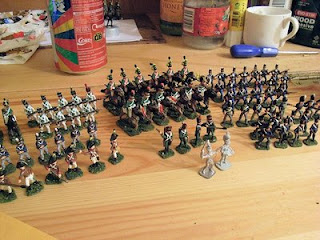 They were over there but now they’re over here. Another 50+ Hintons have made it past Mrs S into my hobby room! These lads have in fact been repatriated from the US and are mostly vintage castings with a few Clayton’s for good measure – all thanks to the incredible generosity of Don.

They arrived together in four separate jiffy bags that plopped through the letterbox yesterday morning. It was a brilliant sound and I waited all day to open them so that I could fully savour the contents – what self-control? In many ways it was like receiving a Hinton Hunt order back in the 70’s, the jiffy bag, the figures wrapped in tissue paper and of course having no idea what was in them (HH were not exactly renowned for their mail order expertise).

I haven’t fully worked out what they are yet as I will need some time on the Hinton Hunter to do that. Those I have identified include Dutch/Belgians, Portuguese, Spanish and some truly superb Austrian cavalry. I now have enough Austrian cavalry figures to field a 6 figure squadron of each type that HH produced (2 squadrons of lancers!). There are also RHA gunners (my RHA officer is definitely not lonely now), Austrian gunners, Dutch Belgian gunners and a French officer of Engineers – a lovely little figure reading a map.

Now I really do have to get down to some painting – you may just be able to see what I am currently working on lurking behind the coke can.
Posted by Stryker at 10:50 2 comments:
Labels: Waffle
Newer Posts Older Posts Home
Subscribe to: Posts (Atom)