Well, you’ll be pleased to know that the 2nd Silesian Landwehr are all suited, booted and ready for parade and to cap it all they’ve just been presented with one of WM’s amazing flags. To say they’re chuffed is an understatement. 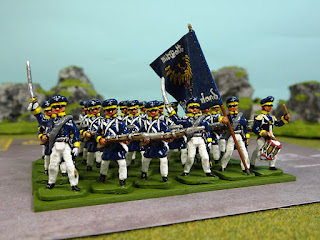 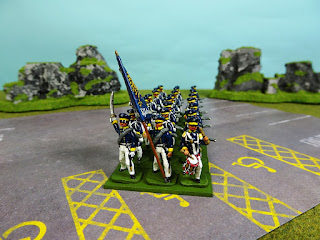 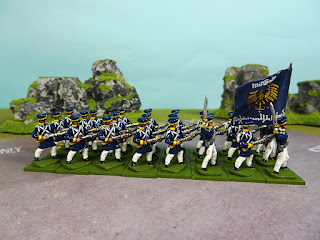 All the figures used were David Clayton castings. The unit is comprised: 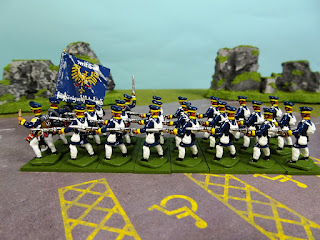 This doubling of strength completes the Landwehr forces for my Prussian army, to paint up a third unit would be unfair on the French.

Thanks to Clive for providing the Warden's parade ground!
Posted by Stryker at 20:10 30 comments:
Labels: David Clayton Figures, On Manoeuvres, Prussian

Karl Freiherr von Müffling served in the capacity of staff officer in the Prussian army for most of the Napoleonic Wars. He was apparently quite good at his job and specialized in topography and cartography which would have been very useful pre-Google Maps. He has made his way into my own miniature army mostly because of his splendid sounding name.


Müffling became deputy to Blucher’s Chief of Staff Gneisenau following the death of Sharnhorst in 1813. He was appointed as liaison officer to Wellington’s HQ during the Hundred Days and, if the film Waterloo is anything to go by, played a vital part in the events leading up to the battle. This included putting a damper on the Duchess of Richmond’s ball by arriving in a thunderstorm and leaving the doors open – “gentlemen obliged to ladies will finish their dance!”.


The figure is PN.69 ADC to General mounted on horse PNH/1. This was another of my little eBay wins a few weeks ago although he came with a British horse (I was able to replace this with a vintage Prussian one). When I bid I was convinced that I didn’t have a Prussian ADC but on checking my spreadsheet I was annoyed to see I had two listed. To my relief though, when the figure arrived I realised that what I already had were 2 x BN/261 ADC in cocked hat holding letter which I’d misidentified. Good news for the Duke who potentially has two more staff officers.

Footnote: John Savident played Muffling in the film Waterloo. Savident became much more famous in the 1990s for playing Fred Elliott the butcher in Coronation Street.

Here are the Empress’ Dragoons based up and parading with the Horse Grenadiers. These two squadrons will be brigaded together to form one twelve figure unit in my French army. Under my rules Muskets & Marshals Guard heavy cavalry are the equivalent of Tiger tanks in WW2 – almost unstoppable. 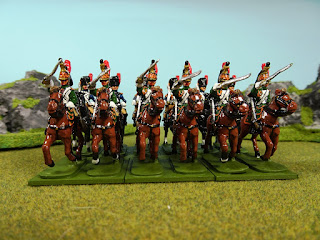 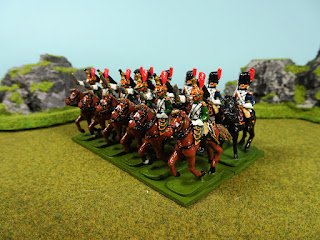 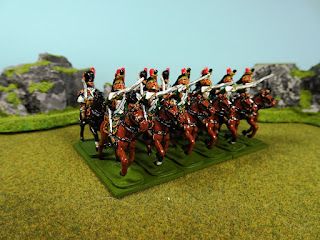 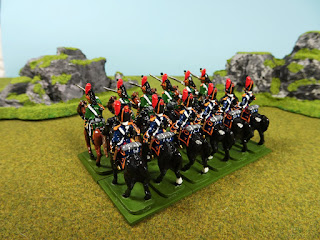 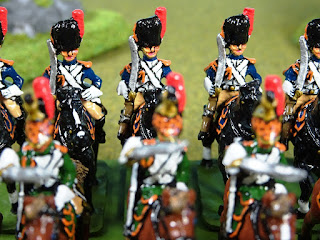 All the figures used are vintage Hinton Hunt castings (which only seems right) they are:

Next I’ll be turning my attention to the Guard horse artillery to support them.
Posted by Stryker at 20:38 27 comments:
Labels: French, Guard, Heavy Cavalry
Newer Posts Older Posts Home
Subscribe to: Posts (Atom)