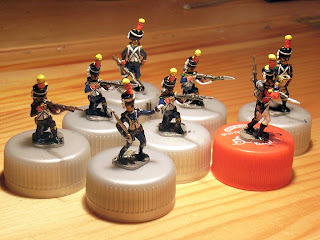 I did say that I was going to try and paint all eighteen of the Voltigeurs before Christmas but I always thought this might be a paint job too far. I have only managed to complete eight members of the 10th Legere and here you can see them negotiating their way through some giant bottle caps. I use the bottle caps as temporary bases while painting because I’ve seen it on other people’s blogs and thought it looked more professional than the scrappy little off cuts of plasticard I was using before.

The finished uniforms do look a bit garish to me (like a military version of Noddy) and I certainly think this may have a bit of a negative impact on their tactical role by drawing fire as Rafa pointed out. I use Foundry paints and find that the red and yellow doesn’t cover very well requiring four or five coats – this adds considerably to the time taken to paint each figure and this is part of my excuse for the low productivity.

As I suspected though they have been very enjoyable to paint as all the figures are great sculpts and cleanly moulded. To finish the unit I have some standing firing and charging figures but it will definitely be 2009 before they’re done.

Have a Merry Christmas and a Happy New Year!
Posted by Stryker at 09:13 6 comments:
Labels: French

I was very fortunate to have a visit from Roy and Matt today, both Hinton Hunt enthusiasts visiting Devon on a winter break. Having left their wives to enjoy a gentle stroll around the harbour, they took time out to come and review my troops. Roy brought along some splendid British HH’s from his Peninsula War army all beautifully painted and based (Mrs S in particular liked the basing – why don’t you do yours like that? Doh!). In his youth Roy once had a part-time job casting figures for Marcus Hinton although because of Marcus’s nocturnal habits he says he never saw very much of him. Roy’s collection of HH’s is huge (I mean HUGE!) and I very much hope to be able to take up his offer to see them in the near future.

I stupidly didn’t think to take a picture of Roy’s figures but I did snap a few of my own troops on parade (click on the images for a close up). This is my entire collection of painted and based Hinton Hunts which now stands at around the 200 mark. Only another 600 to go… 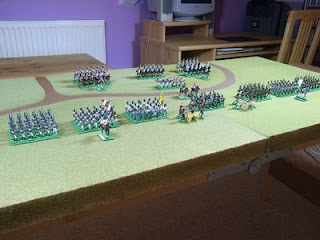 The whole army on parade. 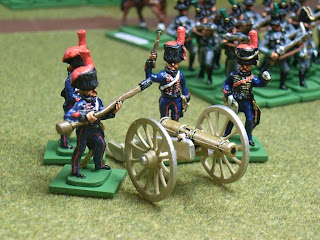 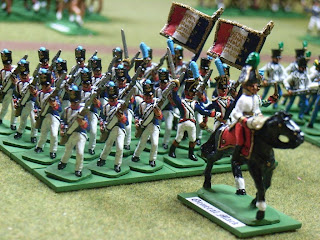 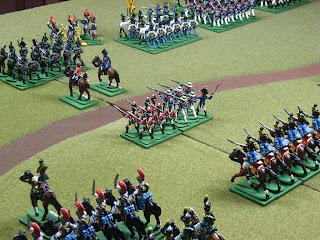 The French cavalry flanked by Austrian Hussars support the infantry. 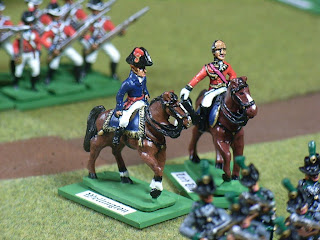 As the senior officers present The Duke of Wellington and Lord Hill return the salute.

Posted by Stryker at 19:43 6 comments:
Labels: On Manoeuvres 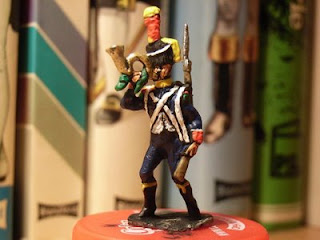 You have to feel a bit sorry for this little guy. When I first got my hands on him he was masquerading as a bugler in a batch of Nassau Grenadiers wearing a rather tatty green uniform. Having correctly identified him as FN86 French Light Infantry Voltigeur Bugler he was set aside to await reinforcements. Eventually (with help from Clive) I received enough Clayton castings to make up a full unit of 18 figures.

So when a couple of days ago his turn in the painting queue came around he was thrust into jar of bleach (Sainsbury’s own brand) to strip away the old paint and then prepared to receive his new uniform. Now as you know I had a bit of a problem finding the correct uniform information for my Voltigeurs until Rafa kindly emailed some great illustrations. These enabled me to correctly paint my first few figures – or so I thought. 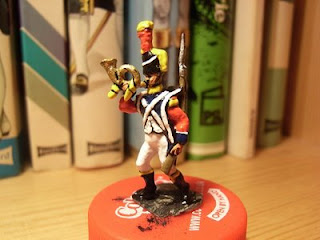 Although the information I had gave me the low down on the rank and file figures and even the Officer, I didn’t have anything on the bugler - so I just made it up, quite Old School I thought. Everything was hunky-dory until, just as the paint was drying (but luckily before the varnish had been applied) I had an email from Trevor attaching a copy of the original painting instruction sheet issued by Hinton Hunt. This was really great except that, yep – I had painted him all wrong because of course he should have been in reverse colours being a musician!

Anyway, he’s had a green coat, a blue coat and now a red coat but at least he was spared the indignity of a second dunk in the bleach.

On a separate note – check out the new blog by Ron Marshall for some Hinton Hunt eye candy.
Posted by Stryker at 18:52 4 comments:
Labels: French 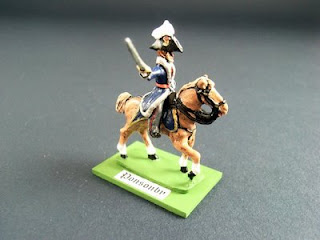 This is the latest addition to my Hinton Hunt personality figure collection namely BN257 Maj-Gen Sir William Ponsonby mounted on BNH11 General’s Horse. Another nice little figure and again this one is a David Clayton casting. There are more than 25 personality figures in the HH range and I currently have 15 of them. I’m going to be using mine as Colonels for each of my units and Ponsonby will be given pride of place in command of the British Cavalry.

Ponsonby arrived on the Peninsula in 1811 with the 5th Dragoon Guards. He subsequently took part in the charge of the Heavy brigade at Salamanca and was promoted to command of the brigade following the battle. At Waterloo he commanded the Union Brigade and became its most famous casualty during the headlong charge into D’Erlon’s columns. Some put his death at the hands of seven French lancers down to the fact that he was not riding his best horse at the time. 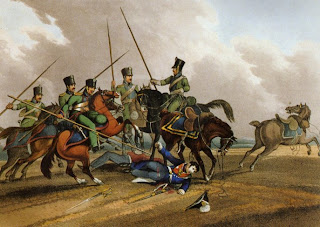 In the film Waterloo there is a sequence where Ponsonby meets his fate having given his watch to an aide for safekeeping. It’s one of those odd sequences in the film (like the charge of the Scots Grey’s) where the rest of the battle disappears and all you see is Ponsonby being circled by the lancers (anyone remember who plays him in the film?). I think the aide gets the chop as well, quite dastardly really.
Posted by Stryker at 16:07 15 comments:
Labels: British, General Staff 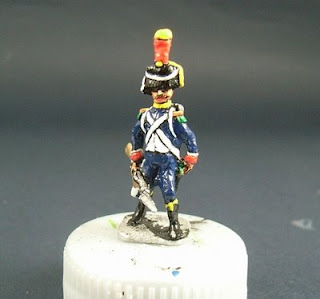 This is my first attempt at one of the French Light Infantry Voltigeur figures. He has been painted as accurately as I could (with thanks to Rafa) as a Voltigeur of the 10th Legere Regiment. Whatever your opinion of the Hinton Hunt range as a whole I don’t think anyone can deny that this is a lovely little figure. The pose is full of character and the detail superb especially considering that this is a casting produced by David Clayton almost certainly without the master mould. For the record the figure is:

I think I’m going to enjoy painting the rest of this unit as it consists of 18 figures in 6 different figure poses which is a bit more interesting that painting 24 figure regiments all of the same type. I’m hoping to complete the whole lot before Christmas but this may be a bit optimistic – we’ll see.
Posted by Stryker at 09:22 8 comments:
Labels: French
Newer Posts Older Posts Home
Subscribe to: Posts (Atom)