Wargames with my Brother 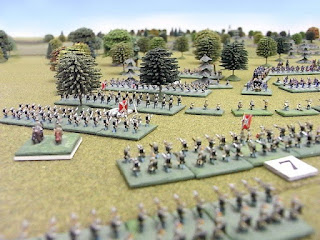 A few months back I started a separate blog Brother Against Brother to record the latest series of wargames between my brother and myself. We started playing with toy soldiers as kids in the early 60s with Airfix Union and Confederate troops and games were played on the carpet using dressing gowns for hills. These games were occasionally interrupted by of one of our parent’s five dogs crossing the battlefield but despite this we had a lot of fun.

Our games tend to be predominately American Civil War ones fought in 1/300th scale but there are other things in the pipeline. We fight them now on a proper wargame table (which is an improvement on the floor) but spookily we’re still interrupted occasionally by my own dog Snuff who resents the intrusion into the garage (we have to walk past her bed to get there) and does like to chip in with the odd bark during a game.

Now I know 1/300th isn’t everyone’s cup of tea but please take a look and if you like what you see remember to follow the blog (click here) because there’s a very good chance that the Hinton Hunts may show up there before too long. Right now though we’re halfway through a re-fight of Chancellorsville and things are just starting to get interesting…
Posted by Stryker at 19:48 5 comments:
Labels: Off Topic 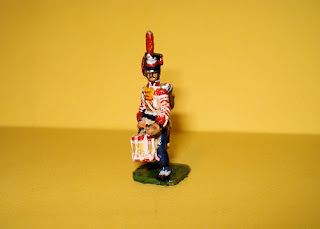 Roy suggested that I add a drummer to the Polish command group by converting a French drummer. This would involved a head graft which I think I could just about manage but I’d worry about him losing his head in the heat of battle.

But then, this morning, Steve sent me this picture of a Polish drummer he converted from an advancing Polish voltigeur (WN.23). I quite like this idea as no head graft is required but it looks a bit fiddly all the same.

To be honest, I wasn’t going to bother with a drummer at all but now I feel slightly under pressure.
Posted by Stryker at 17:57 4 comments:
Labels: Conversions, Polish 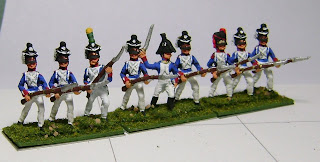 Don sent me this picture of some of his David Clayton Poles. As you can see these ones look pretty much like regular Hinton Hunt so, as I suspected, my mystery Poles are probably not Clayton ones.

That still leaves either DK or the possibility that they are home-cast conversions. Does anyone have any photos of DK (Der Kreigspielers) Poles?
Posted by Stryker at 19:12 No comments:
Labels: Polish 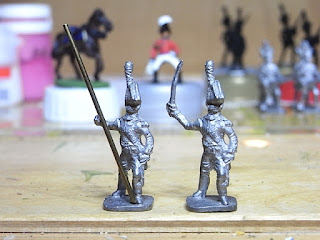 Hinton Hunt never produced a standard-bearer figure for their Duchy of Warsaw range so I’m having another stab at a conversion to provide one for the 8th Regiment. I’m fortunate enough to have two officer figures WN.10 Officer charging so one of these has been sacrificed for the greater good of the regiment and had his sword removed to make way for a flagpole.

I feel a little bit guilty about cutting up a vintage figure in this way, especially as very few of the other figures in this unit will be genuine vintage ones. However, I really do like to have a flag with each unit to provide that extra splash of colour on the tabletop.

In due course I will provide him with a green-stuff hand and a suitable topping to the flagpole.
Posted by Stryker at 19:26 3 comments:
Labels: Polish 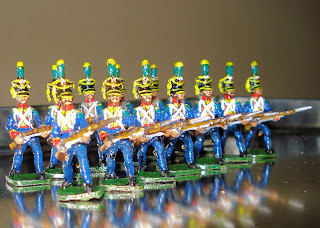 Steve very kindly sent me this picture of some Poles that look very similar to my own mystery variant of WN.13. They were genuine Hinton Hunt figures purchased in the 1970s as far as he remembers.

So the plot thickens because my own copy of the Hinton Hunt catalogue from around 1972 doesn’t mention this variant. This also rules out the possibility that they are Clayton figures because he didn’t produce figures until much later, and anyway I’m 99% certain that mine are not Clayton.

This leads me to conclude that the figure is either a genuine Hinton Hunt one (in which case I feel slightly sick about snipping off those plumes) or one produced by Der Kriegspielers in the USA. There is a listing in the DK catalogue 825-205 Polish Line Infantry Charging but no illustration of the figure.

I painted this (click here) test figure for the 8th Polish Regiment almost two years ago so I think that it’s time I got on and painted the whole unit. To this end I’ve been cleaning up the castings and getting them ready for undercoating. 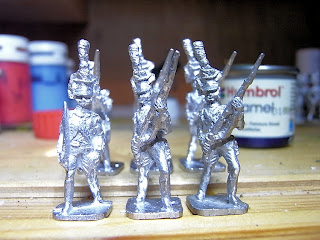 The six figures above make up the Voltigeur Company (my stylised units have six-figure Companies and the 8th will have two of Fusiliers, one of Voltigeurs and one of Grenadiers). The only vintage figure in this line up is the chap on the right of the front line; the others are later but quite decent castings of unknown origin.

When I was sorting through the various Polish figures in the lead pile I noticed something fishy about some ones with tall plumes that I had initially mistaken for Fusiliers. The Hinton Hunt Polish Fusilier figure has a pom-pom and no epaulets and the Grenadiers have bearskins so I eventually deduced that someone had created their own Grenadiers with “Lancer Caps” from the Fusilier model WN.13. 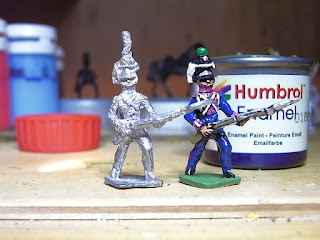 This was fine though because it has been an easy job to turn them back into the Fusiliers I require by snipping off the plume and taking a file to the epaulets. I do hope it doesn’t take me another two years to finish this lot off.
Posted by Stryker at 18:48 4 comments:
Labels: Polish
Newer Posts Older Posts Home
Subscribe to: Posts (Atom)