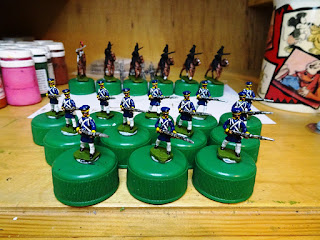 I’ve managed to complete another 6 Landwehr this week taking me to the halfway point of the unit. However, I think it’s unlikely that I’ll have the whole unit finished in time for the game at the end of next month due to distractions caused by a combination of work, the World Cup and the heat wave.

Fortunately Goya has come to the rescue by offering to paint up 6 S-Range figures to make up the numbers if I can get my own tally to 18. Another 6 figures from me should be achievable I hope and the resulting temporary unit should look quite interesting.

Whilst painting the current batch I noticed that there are some figures aligned sideways on their bases rather than diagonally as they should be (see the figure in the centre at the front). All these figures are Clayton castings and all came from the same source a few years ago. Presumably these are just casting variations as the figures themselves are identical.
Posted by Stryker at 20:39 24 comments:
Labels: David Clayton Figures, Prussian 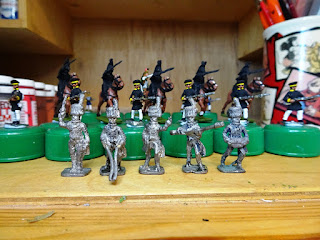 A few days ago, Mark called for a chat and one of the things he mentioned was whether I’d seen that someone paid £26 for five Hinton Hunt Old Guard Horse Artillerymen on eBay. Caught on the hop (and not wanting to appear like an idiot) I didn’t admit that it was actually me. Not strictly me I suppose as it was Mrs S bidding for my birthday, but I was the one who increased the bid from a sensible(!) £2 per figure to the outlandish £5.20 each I paid.

Now I’ve stayed clear of eBay for quite a few years because I still have way too many figures waiting to paint and these days I tend to acquire stuff through swops or privately or ideally not at all. However, I really wanted to have another Guard Horse Artillery battery and all the usual channels had run dry and there they were beckoning at me, and it was my birthday after all.

They are very nice castings (no honestly, they are) but that really is it for French artillery now!
Posted by Stryker at 20:31 16 comments:
Labels: Artillery, French

Having added to the Guard artillery I decided I should add another battery to the French Line foot artillery to even things out. This gives me a total of three Line batteries and at some point I’ll do a fourth. 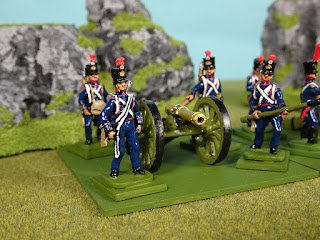 All my artillery batteries have one gun and four foot figures. The new additions are:

The two artillery pieces left and centre are I believe Hinchliffe ones (I’ve had them a while but I'm not completely sure of their pedigree). The gun on the right is by Newline Designs.
Posted by Stryker at 20:54 15 comments:
Labels: Artillery, French

Return of the Traffic Wardens 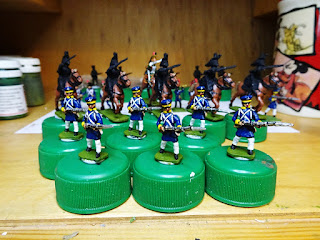 Just when you thought it was safe to park freestyle… the Traffic Wardens are back! These are David Clayton castings of PN.18 Landwehr Private (charging). They are the advance guard of the 2nd Silesian Landwehr.

The 1st Silesian Landwehr have gained something of a reputation for themselves as tenacious fighters bucking the trend of ‘C’ class Militia and seeing off some formidable foes over the last few years. I’m hoping the new battalion will perform equally well.

The reason for this departure from my schedule of painting Imperial Guard is that Goya is planning to host a Plancenoit Command & Colors game soon and we are lacking in Landwehr units. C&CN should be a gentle introduction to table-top warfare for them – just the ticket (forgive the pun).
Posted by Stryker at 20:59 12 comments:
Labels: Prussian 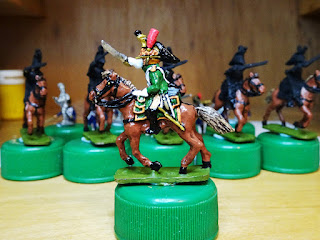 One of the comments on my last post suggested that my horse was painted as a bay rather than a chestnut which got me wondering. A quick look at my Kevin Dallimore painting bible confirmed that this is indeed the case as he shows a chestnut as having a light coloured mane and tail.

I’m not normally too fussed about how I paint horses as I’ve never been very good at them (I have the thin excuse that this is a retro project about recreating an army I had as a teenager when my painting left a lot to be desired). However I thought I should revisit my test figure (which is of course the point of doing a test figure) and dry brush the mane and tail with Foundry 53C. I think it was worth this little extra bit of effort.

A couple of you asked what green I used for the coat. It was nothing too exotic, just the unimaginatively named Foundry French Dragoon Green 70B. I’m going to plough on with the rest of the squadron however this may get interrupted by another unit of Silesian Landwehr which is entirely Goya's fault.
Posted by Stryker at 19:05 8 comments:
Labels: French, Guard, Heavy Cavalry 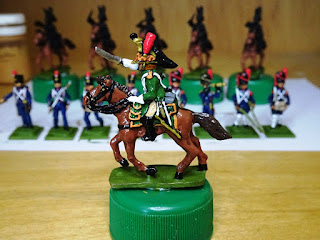 Continuing on my Imperial Guard theme I thought it was time to expand the Guard cavalry. As you may remember my only Guard cavalry unit is the combined Horse Grenadiers and Polish Lancers which is hardly an historical unit. My aim is to produce a heavy cavalry unit comprised of half Horse Grenadiers and half Empress’ Dragoons and a light unit made up of Polish Lancers and Eclaireurs.

This is my test figure for the Guard Dragoons FN/60 Empresses Dragoon (Mounted charging). I used the Hinton Hunt painting instructions for guidance along with Wellington Man’s blog for help with the usual detail conundrums (a bit sneaky I know but Matt has done the hard work for me!).

There are a couple of subtle differences between the Hinton Hunt painting instructions and Matt’s version so see if you can spot them (no prizes if you do though).
Posted by Stryker at 20:58 10 comments:
Labels: French, Guard, Heavy Cavalry
Newer Posts Older Posts Home
Subscribe to: Posts (Atom)